Watching is The New York Times’s TV and film recommendation website. Sign up for our twice-weekly newsletter here.

The genre gods have bestowed upon us a bountiful harvest this October, and you can find onscreen scares in some unexpected places as we head toward Halloween. Below are the most interesting of what we’ve found among the TV series and movies coming to the major services this month, plus a roundup of all the best new titles in all genres. (Streaming services occasionally change schedules without giving notice.) 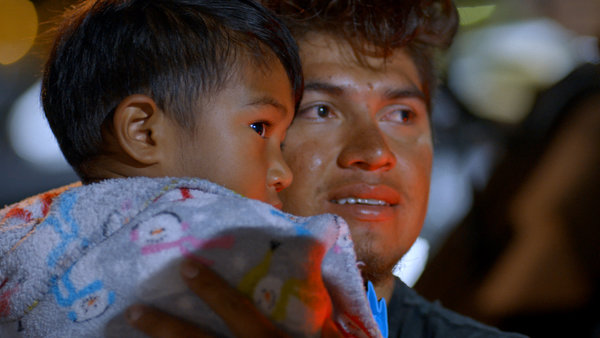 One of the most shocking moments in this six-episode docuseries occurs when a bulky Immigration and Customs Enforcement agent pushes a lawyer so hard that she breaks her foot. “The fact that an ICE agent would assault me in front of cameras and 40 observers, knowing that I’m an attorney …” says Andrea Martinez, the lawyer. “Just imagine how immigrants are treated in private ICE detention facilities.”

The stories of the eight families featured here mean we don’t have to rely on the hypothetical: Undocumented immigrants from Mexico, Honduras, Colombia, Laos, Israel and Mauritania — including small children, teenagers and a pregnant woman — share their journeys as they fight deportation orders, endure separation from their families, suffer death threats and seek asylum. Many of these desperate people face torture and even enslavement if repatriated to their home countries, and this series is a difficult and eye-opening watch.

“The man we’re about to meet,” the gangster Tommy Shelby (Cillian Murphy) tells his family in the new season of “Peaky Blinders,” “is the devil.” Well, close enough. Tommy is talking about the British fascist Oswald Mosley, who in 1929 was railing against Jews, foreigners and the press. When this season opens, Mosley is a Labour MP, but he wants to start a new, hate-fueled political party and he wants to team up with Tommy, whose strain of populism is on the rise. Echoes of “The Godfather” abound this season, so keep your eye out for oranges.

Still wanted: Jesse Pinkman. Six years after the finale of “Breaking Bad,” the series creator Vince Gilligan returns to the scene of the crimes to reveal what happens to Jesse (Aaron Paul) after he races away from the white supremacist compound in a 1978 Chevrolet. Now a fugitive on the run, Jesse is forced to rely on the few friends he can still trust (Badger and Skinny Pete?) and one longtime associate (the junkyard owner Old Joe). A half dozen other familiar faces from the original series also reappear, including one key cast member who had to be flown in and out of the Albuquerque film set on a private jet to escape notice during production.

It’s a long story, but in this new comedy a listless man named Miles (Paul Rudd), ground down by life, decides to check into a special spa for rejuvenation — and winds up getting cloned. On one hand, Miles can now send his clone (also Rudd) to his boring job, while the original Miles stays home and pursues his dream of writing screenplays. Unfortunately, not only is the clone better at Miles’s job than Miles is, his co-workers like the clone more, too. Even worse, Miles’s wife (Aisling Bea), who’s unaware of what’s going on, prefers the clone’s company. Realizing that he’s being elbowed out of his own life, Miles determines to get it back. The show asks us to root for Miles, but you may find yourself pulling for the clone instead.

Kate McKinnon hates ketchup, but it turns out she’s fine with the stinky durian fruit. In each episode of David Chang’s new travel series, the chef visits a different city with a guest star, and for McKinnon’s installment, the pair eat their way through Phnom Penh, Cambodia. The show is less structured than Chang’s previous Netflix show, “Ugly Delicious,” and mostly focuses on chatting, chewing and exploring. There are temple visits and political reflections, as well as a mani-pedi with Lena Waithe in Los Angeles and some camel riding with Chrissy Teigen in Marrakesh. As with most gustatory experiences, “Breakfast, Lunch & Dinner” is not just about the food, it’s about the company, too, and Chang’s reflective tone suggests he’s been taking a cue from Anthony Bourdain’s work.

In this peppy high school comedy, a nuclear disaster wipes out most of the adults and turns the rest into shuffling “ghoulies.” In this dangerous post-apocalyptic world, the pop culture savvy kids of Glendale High turn their cliques into fierce tribes, and one group of young misfits is intent on hanging onto their humanity. The show’s shifting point of view rotates from the new kid Josh to a 10-year-old genius (and pyromaniac), Angelica, to the overburdened Principal Burr (Matthew Broderick). If you like “Buffy the Vampire Slayer” or “Zombieland,” it’s worth checking out “Daybreak.”

“The Laundromat” and “Tell Me Who I Am.”

Each stand-alone episode of this new anthology series has been adapted from the “Modern Love” column, published in The New York Times, with an ever-changing cast bringing the stories to life. Anne Hathaway navigates the challenges of dating while bipolar. Julia Garner explores her daddy issues with Shea Whigham. Dev Patel plays a dating-app inventor going through a love struggle of his own. Although the original columns were real-life stories, the TV versions take varying degrees of creative license. Ann Leary’s tale about how she and her husband Denis Leary saved their marriage through tennis remains much as it was on the page, but Dan Savage’s story about adopting a child from a homeless teen has been substantially reworked.

Welcome to an alternate now. Robert Redford is president, Vietnam has become the 51st state, and you’ll notice bits of trans-dimensional squid falling from the sky intermittently. It’s been about 30 years since the events of Alan Moore’s 1986 graphic novel “Watchmen,” which was adapted into a movie in 2009. This series from the producer Damon Lindelof isn’t a remake or a sequel, but a new story set in the Watchmen world, with Regina King, Jeremy Irons and Tim Blake Nelson among its inhabitants. The borderline sociopath Rorschach is long dead, and a group of violent white supremacists venerate his memory and have adopted his inkblot mask.

Saudi Arabia relaxed one of its many oppressive gender laws last year when it finally allowed women to drive. Since then, all kinds of female motorists have taken to the road, including driving instructors, Uber drivers and even racecar drivers. But as Erica Gornall’s documentary makes clear, Saudi women still have many miles to go, especially since many of the female activists who advocated for this change remain imprisoned on charges of undermining state security and branded as traitors in the press. It’s telling how careful the women featured in “Saudi Women’s Driving School” are when discussing the other rights they’d like to gain — rights which will likely only come when the country’s guardianship system is fully abolished.

Remember Annie Wilkes, the author-bashing literary fan in Stephen King’s “Misery”? Well, her younger self (played by Lizzy Caplan) is passing through Castle Rock, Me., in the second season of Hulu’s series set in the King universe. She’s still a nurse at this early point, but she’s also taking meds for what seem to be schizophrenia and bipolar disorder. Oh, and she’s wanted for murder. But Annie’s not really the heavy in this season, as we see when she butts heads with Ace Merrill (Paul Sparks), the town bully from King’s novella “The Body” (who also takes issue with his adopted stepbrother, played by Barkhad Abdi). Annie might be psychotic, but in “Castle Rock” she’s almost a solid citizen, with her crimes paling in comparison to the very strange goings-on at Marsten House, overlooking Jerusalem’s Lot.

“Toni Morrison: The Pieces I Am”