It’s the next generation’s time to shine! Bravo king Andy Cohen just announced he’ll be hosting a special episode of Watch What Happens Live with Andy Cohen with the most popular Bravo kids of the Real Housewives franchise. Featured will be Teresa Giudice’s daughter Gia Giudice, Kim Zolciak-Biermann’s daughter Brielle Biermann, Kandi Burruss’ daughter Riley Burruss, and more. TBH it’s exactly the news we’ve all been asking for, and if the episode is like anything we’ve seen from these kids’ parents — which we’re sure it will be — we’re in for a special treat filled with drama and plenty of OMG-worthy moments. 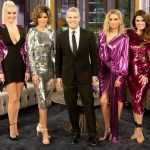 No details yet on when the episode will air, but it’s clear we’re not the only ones freaking out over the sit-down talk with the Bravo kids. As of writing, the post has garnered more than 1,300 comments, with most fans curious about the kids’ reaction to something their parents did while on the show. Surprisingly, many fans were a lot more sympathetic and had a warmer attitude about the mix of teens and young adults — regardless of their feelings towards the parents.

One comment read: “You all seem to have grown into terrific young adults, having said that I would assume your moms are terrific as mothers and maybe not so good in the friendship department. BRAVO to all of you!!”

Another user chimed in with an important question: “For All of Them: Being a kid, in general, is hard. Having all their lives play out in front of an audience must be incredibly challenging. After watching themselves on tv, are there any misconceptions they’d like to clear up or address?” and added, “(Andy, I think it’s so important for them to be able to share their POV. Thank you for giving them this forum.)”

Regardless of whether or not you’re a fan of any of the Bravo kids’ parents, their side deserves to be heard  — away from the pressure of their parents. We can’t wait to listen to all the juicy gossip they’re sure to spill.

Before you go, click here to see the best reality TV shows on right now.