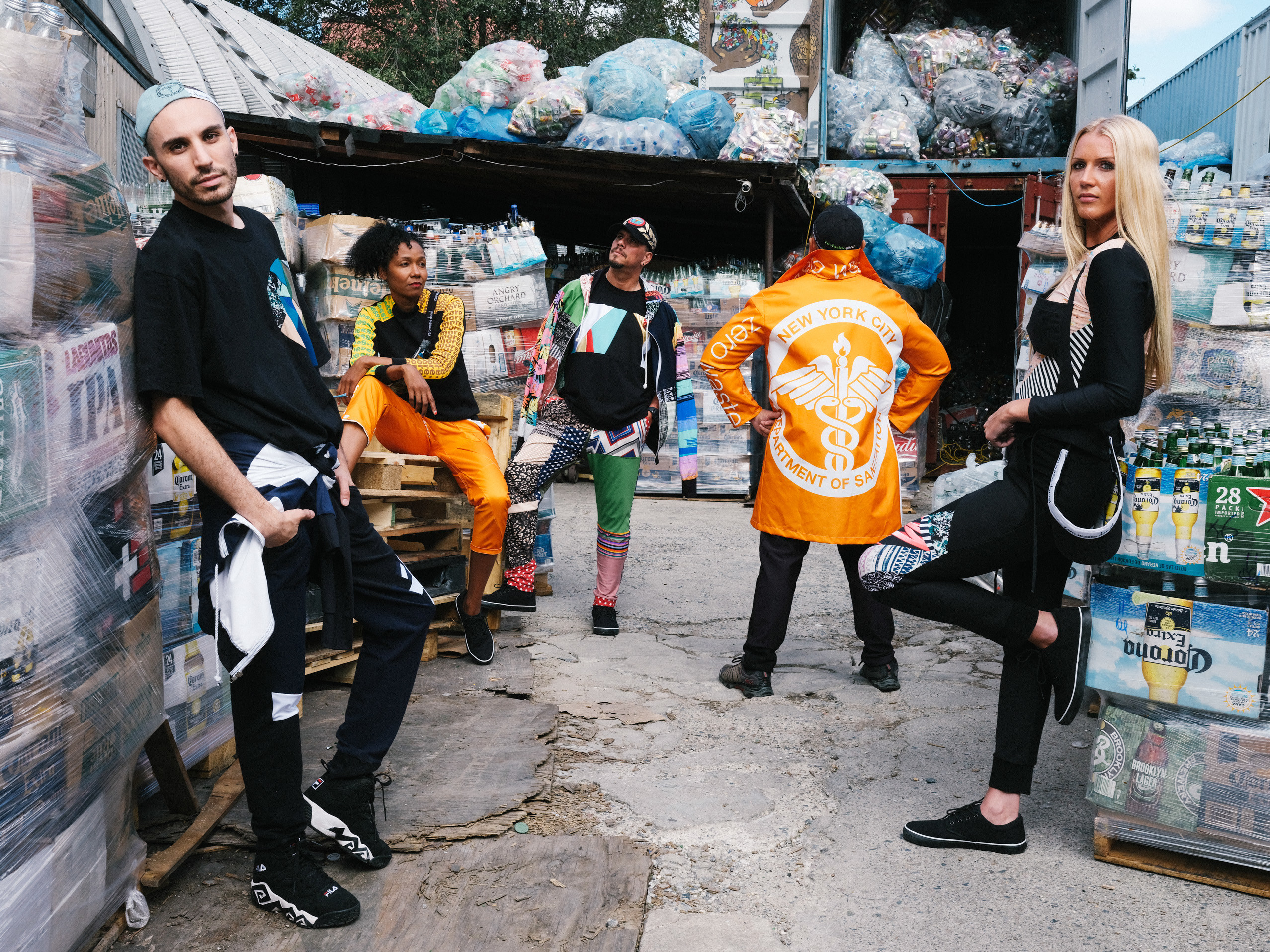 At the ZWD fashion show, the only reserved seats were in the front row for NYC Sanitation employees, who at one point received cheers from the guests in attendance.

Most collaborations for New York Fashion Week involve influencers and A-listers. Long lines, red carpets, and a certain amount of exclusivity are signatures of runway shows. In an alternative take that prioritizes sustainability over celebrity, Brooklyn-based designer Daniel Silverstein of Zero Waste Daniel collaborated with the New York City Department of Sanitation (DSNY) for his fall 2020 collection.

“I wanted to work with DSNY. The whole idea of the collection is to position the Department of Sanitation not as garbage men and women, but as heroes of our zero-waste fight,” said Silverstein in a recent interview at his shop in Brooklyn.

Repurposing former DSNY uniforms and other textile goods sitting in department storage —such as tablecloths, tents, aprons, and even parts from sanitation trucks — he created a 16-piece ZWDSNY collection that generated virtually no waste.

“You can go your entire life without needing a firefighter or a police officer,” said DSNY executive director Robin Brooks, “but you need a sanitation worker at least a couple times a week.” 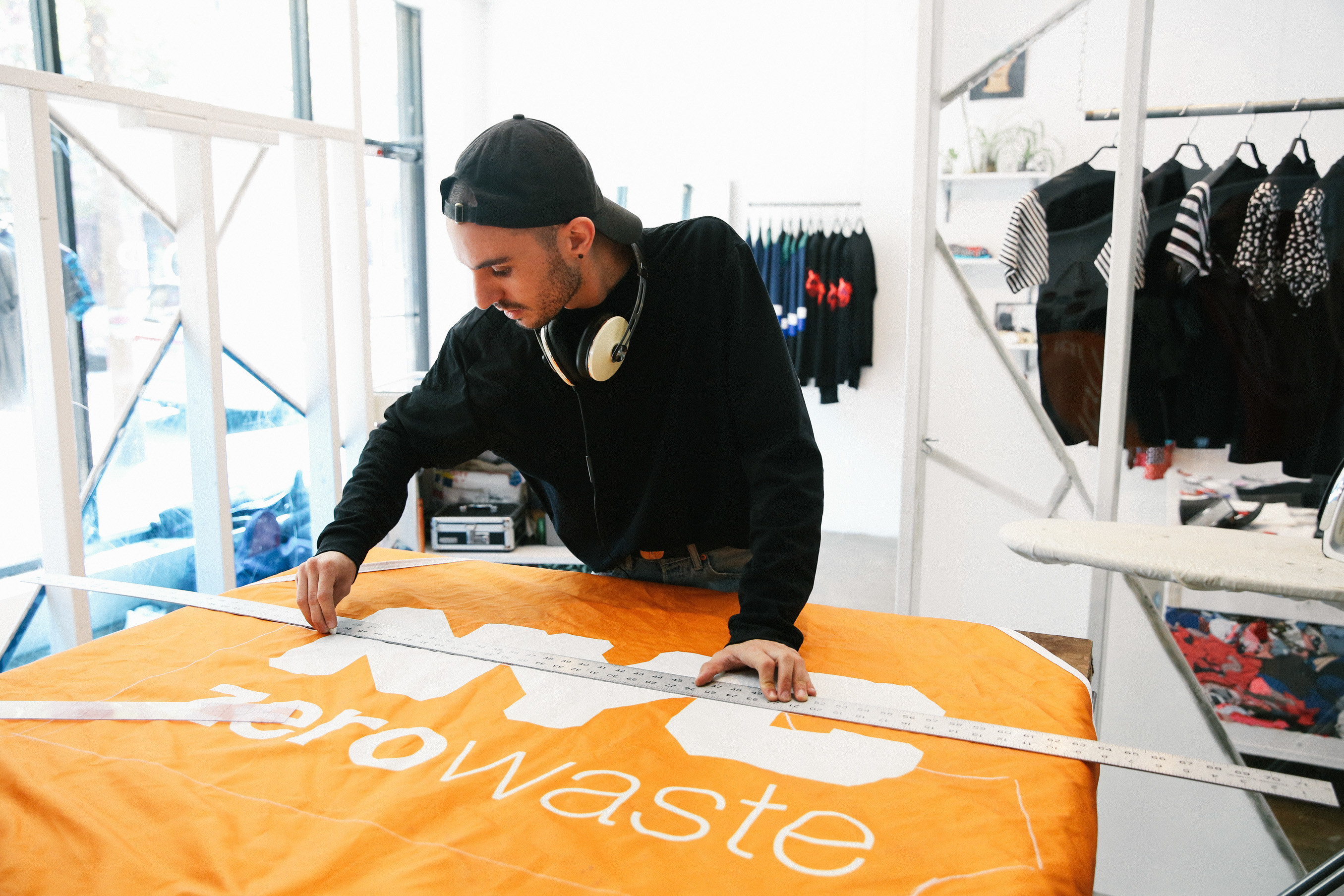 Zero Waste Daniel chalks a line for a coat pattern at his shop in Brooklyn.

Last year, DSNY estimates it collected 3.1 million tons of garbage from the city. With more than 2,000 collection trucks, the department is responsible for maintaining 6,500 miles of city streets and is actively seeking collaborations with artists, designers, and activists to expand awareness of its goal to send zero waste to landfills.

“When I met with Robin Brooks, she told me about some of the challenges that the sanitation workers face, like having F-bombs dropped on them and being constantly honked at and harassed,” said Silverstein.

His zero-waste approach is rare in the fashion industry, which has fallen under increasing scrutiny for the waste it generates. According to the UN, every second, the equivalent of one garbage truck of textiles is sent to a landfill or burned, and if nothing changes, by 2050 the fashion industry will use a quarter of the world’s carbon budget. 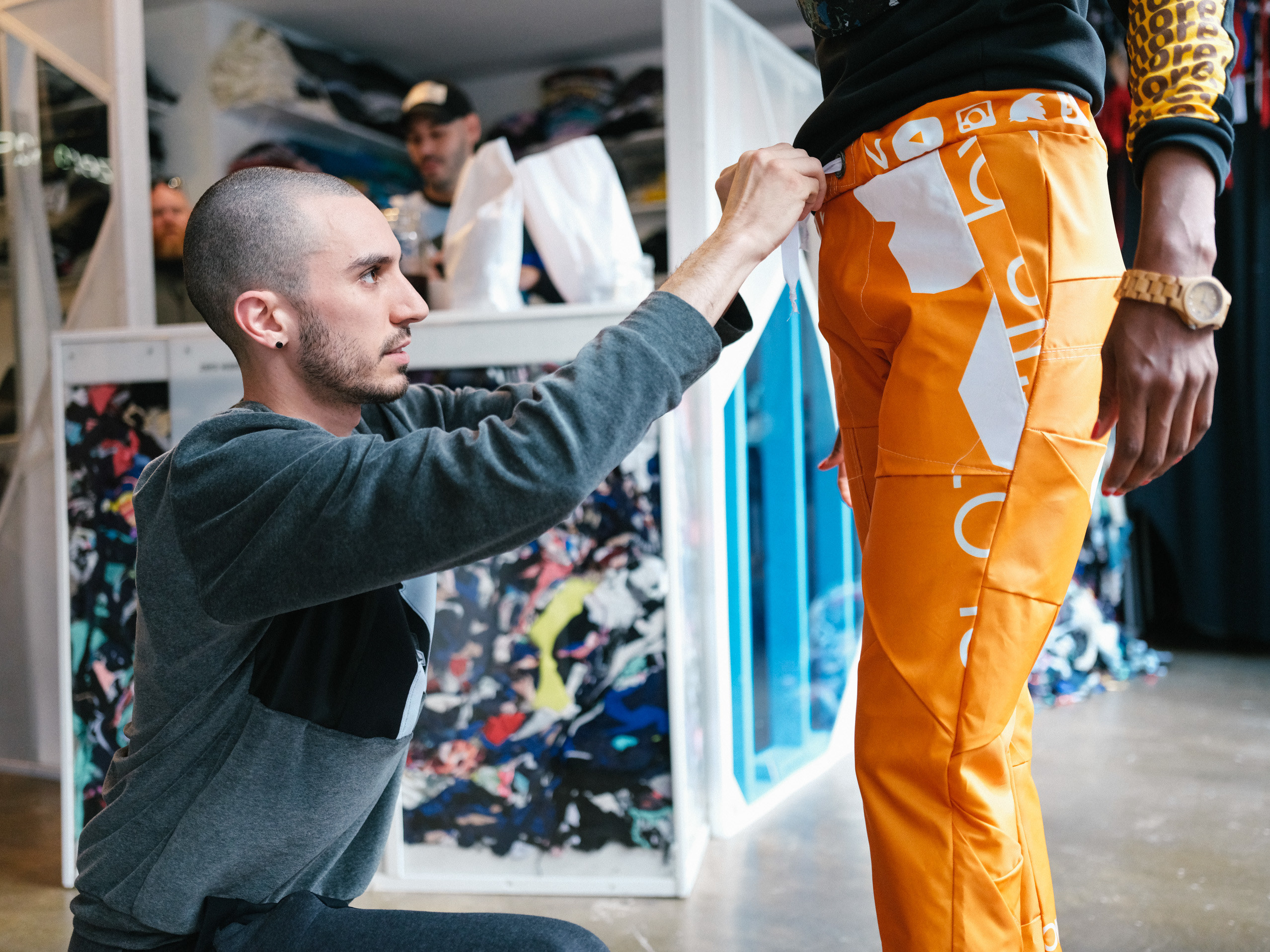 “My point of origin for design is always, show me what you’ve got. Let’s start with what we have already,” said Silverstein. “I would describe my approach as a bit backward — starting with the end goal of zero waste and letting the waste materials inform my design, rather than starting with a traditional point of ‘conceptual’ or ‘art’ inspiration.”

The collection’s signature jacket, which will retail for $1,600, utilizes a bright orange E-Z Up tent from a previous sanitation department event, and a selection of long-sleeved shirts came from tablecloths. A pair of sunglasses integrates upcycled mixed materials from keychains and parts of sanitation trucks.

To source material for the accessories in the ZWDSNY collection, Silverstein partnered with Sure We Can, a recycling center based in Brooklyn. Special Projects Coordinator Ryan Castalia hand-cut and pressed various types of plastic into sheets that could be cut and sewn into items such as tote bags, fanny packs, and wallets. According to Castalia, each 15×18-inch plastic sheet is made from roughly 12 square feet of plastic. 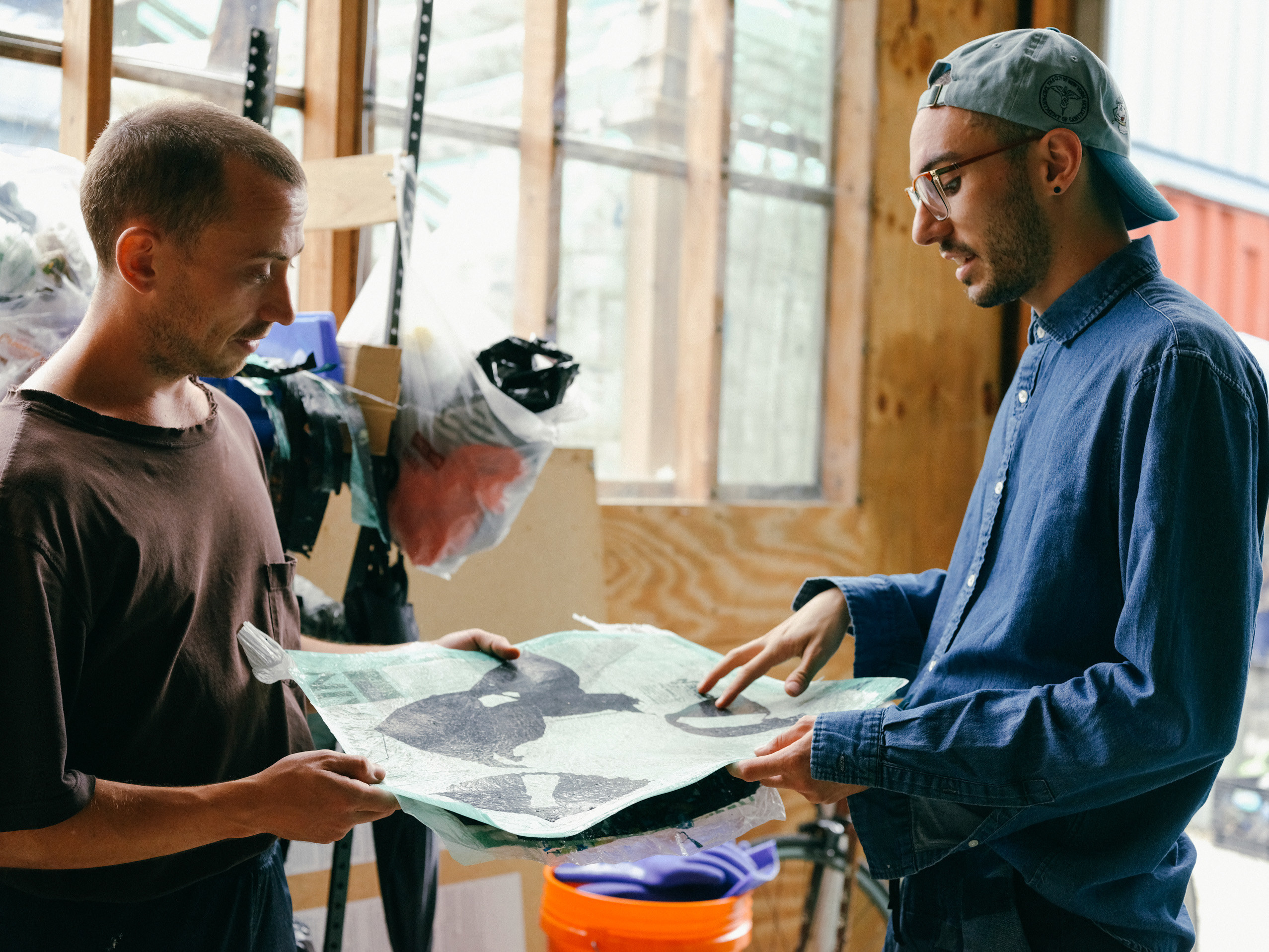 Special Projects Coordinator Ryan Castalia discusses patterns for processed plastic with designer Zero Waste Daniel at Sure We Can, a recycling facility in Brooklyn.

Within design, sustainability and scalability are not always compatible. But by basing the collection on existing DSNY dead stock, the number of pieces made is contingent on existing material, and Silverstein believes he is working with a scalable business model.

“We priced the collection according to how limited and how complicated each piece [is],” said Silverstein, when asked if he believes his designs can scale up for wholesale. “Our coat, for example, can only be made in a limited quantity of six units because there are only a couple of tents to work with … but we can scale as big as we want to, depending on the material we have … with some of the T-shirts for example, we have thousands of items to work with.”

To see more, the accompanying gallery show for ZWDSNY is accessible via the Ace Hotel lobby and will be up until Oct. 4. 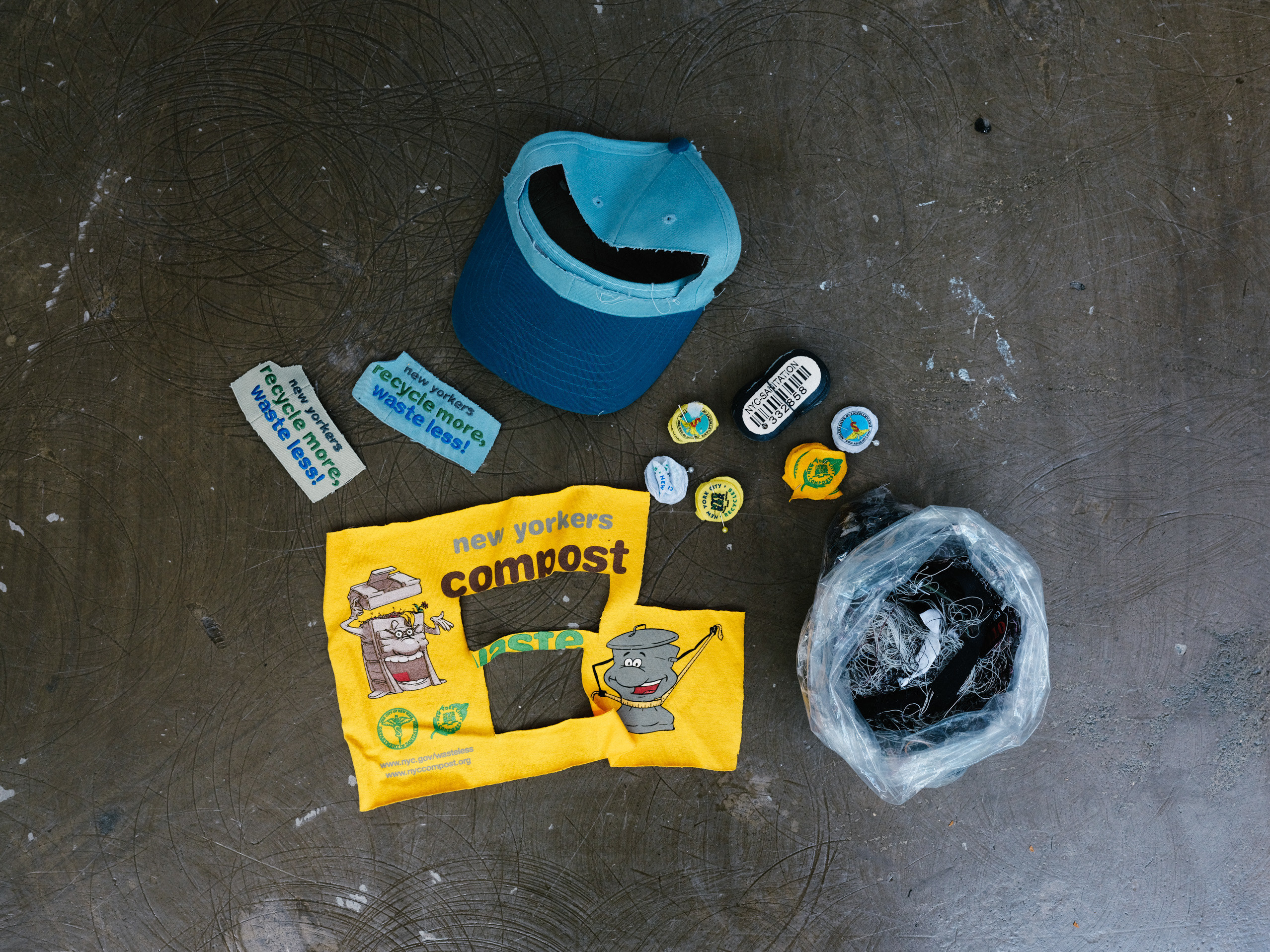 The only leftover material from the fall 2020 ZWDSNY collection includes part of a t-shirt, patches, thread scraps, and a hat. 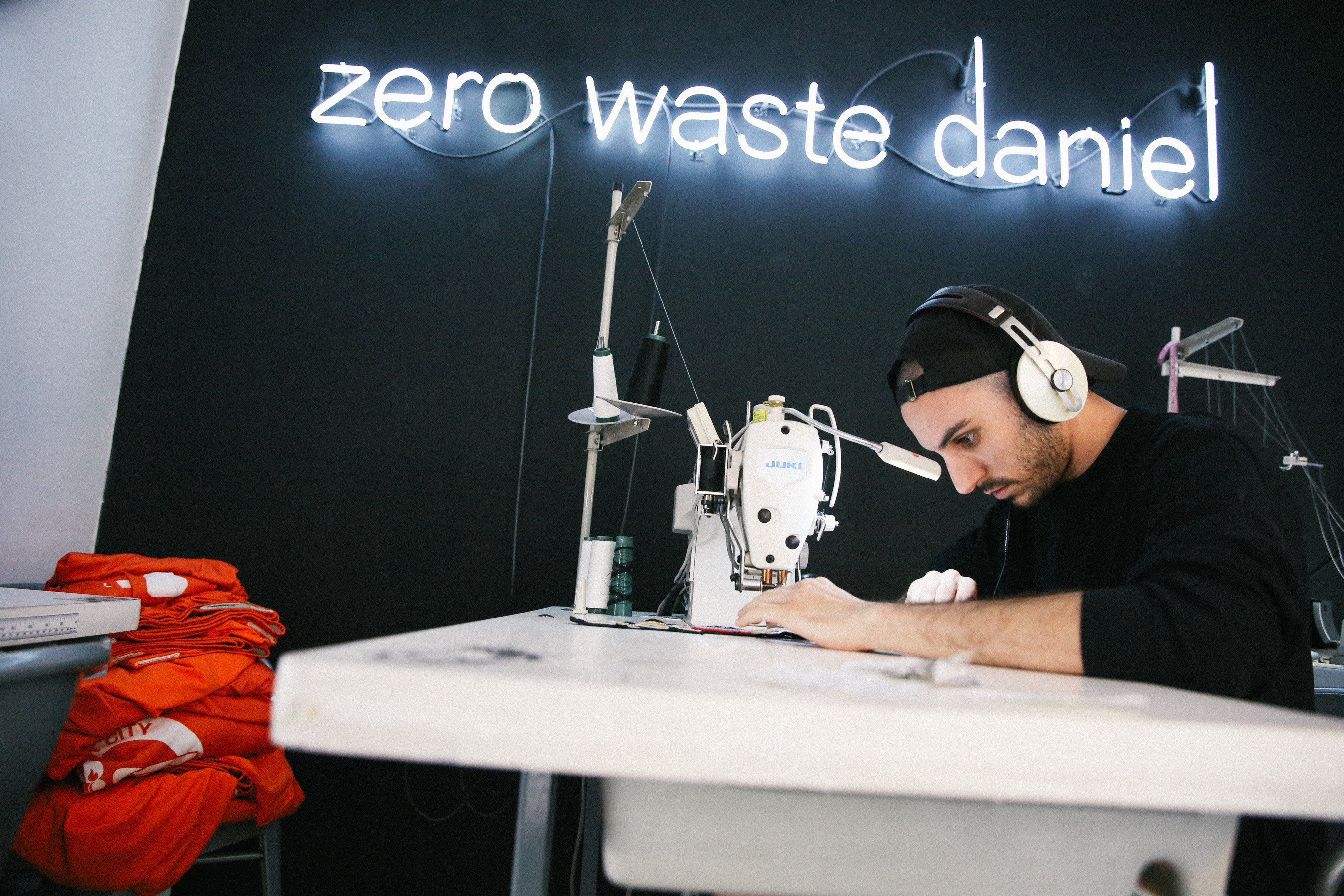 Designer Zero Waste Daniel works on a component for a repurposed sanitation hat at his shop in Brooklyn. 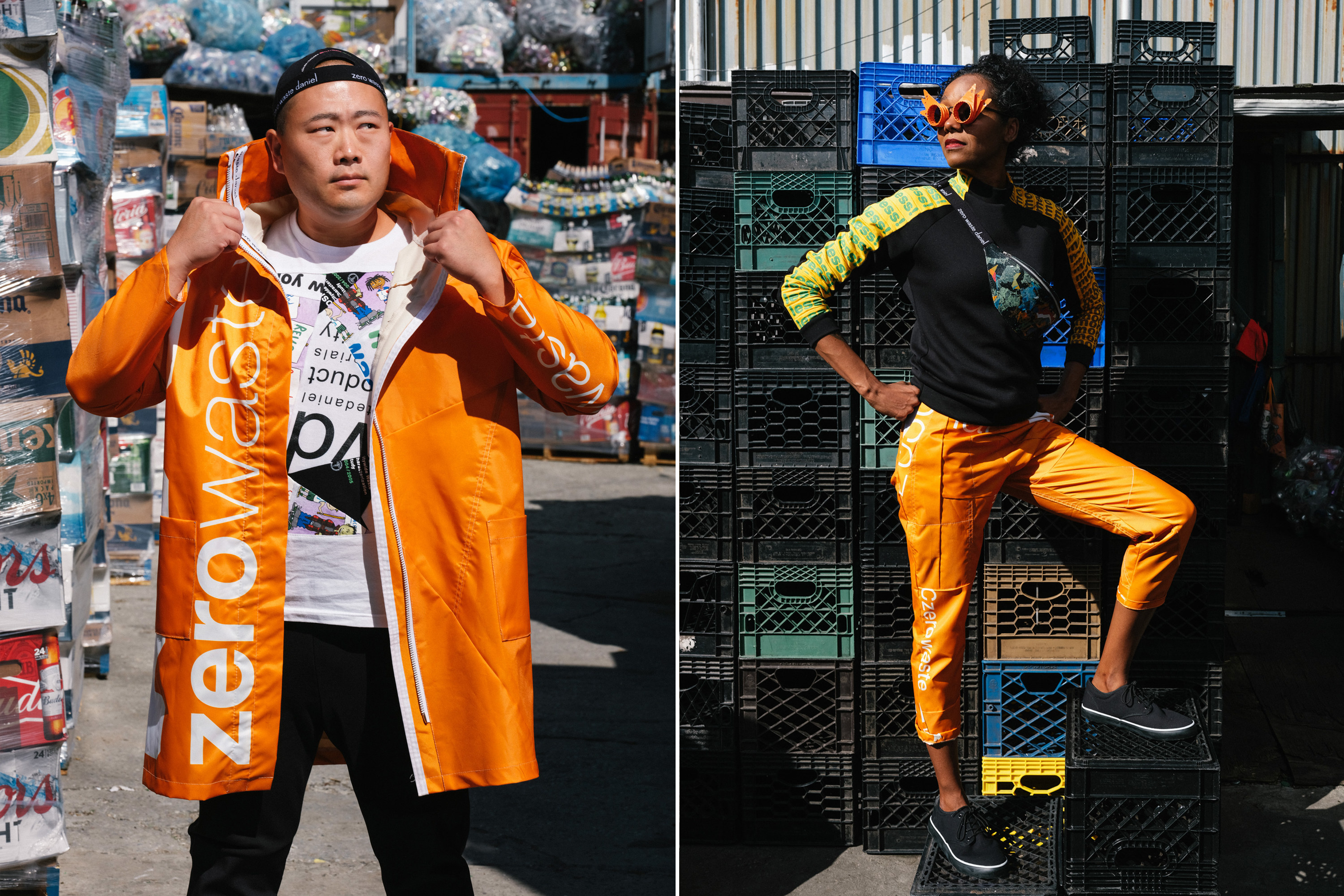 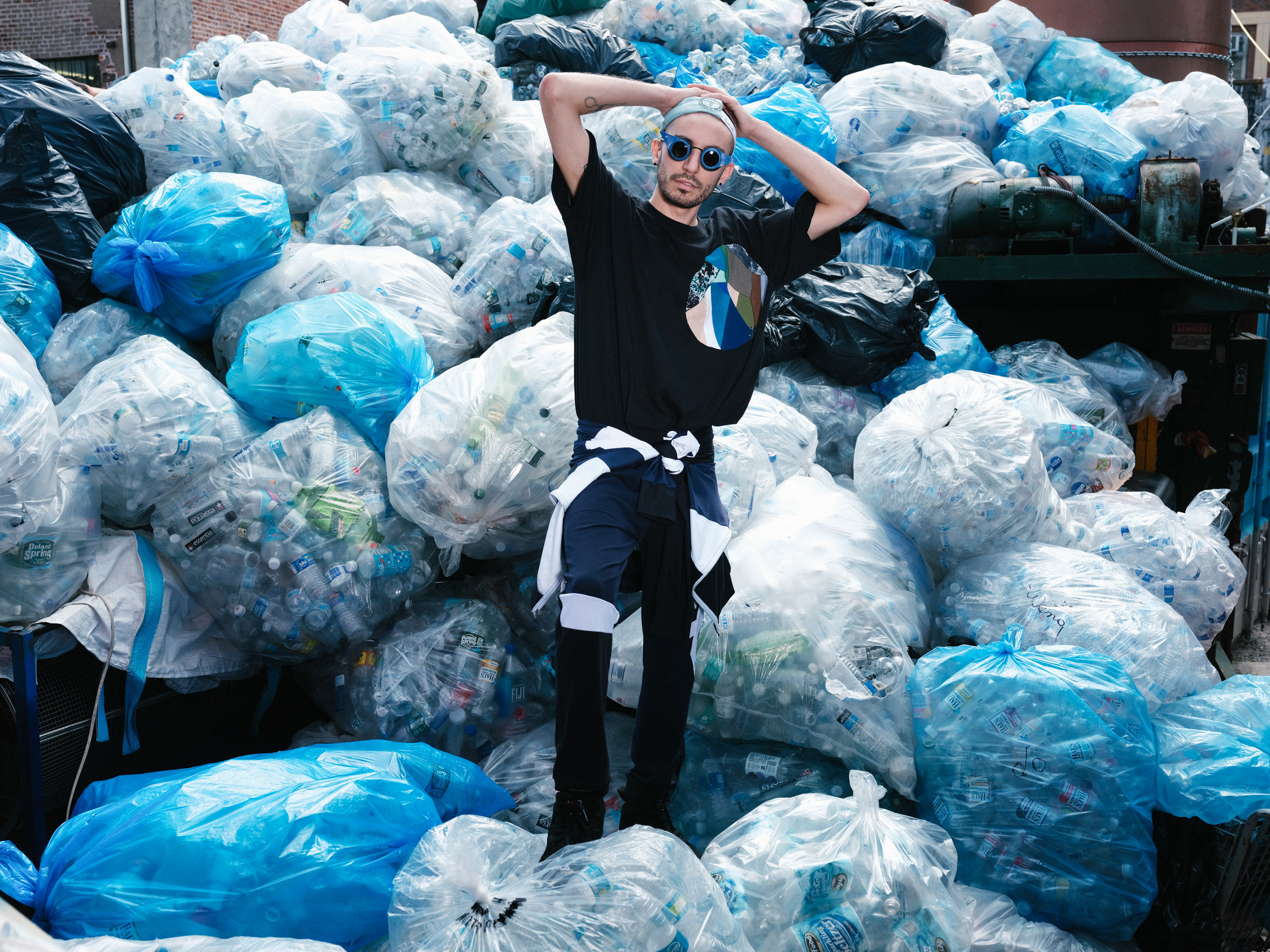 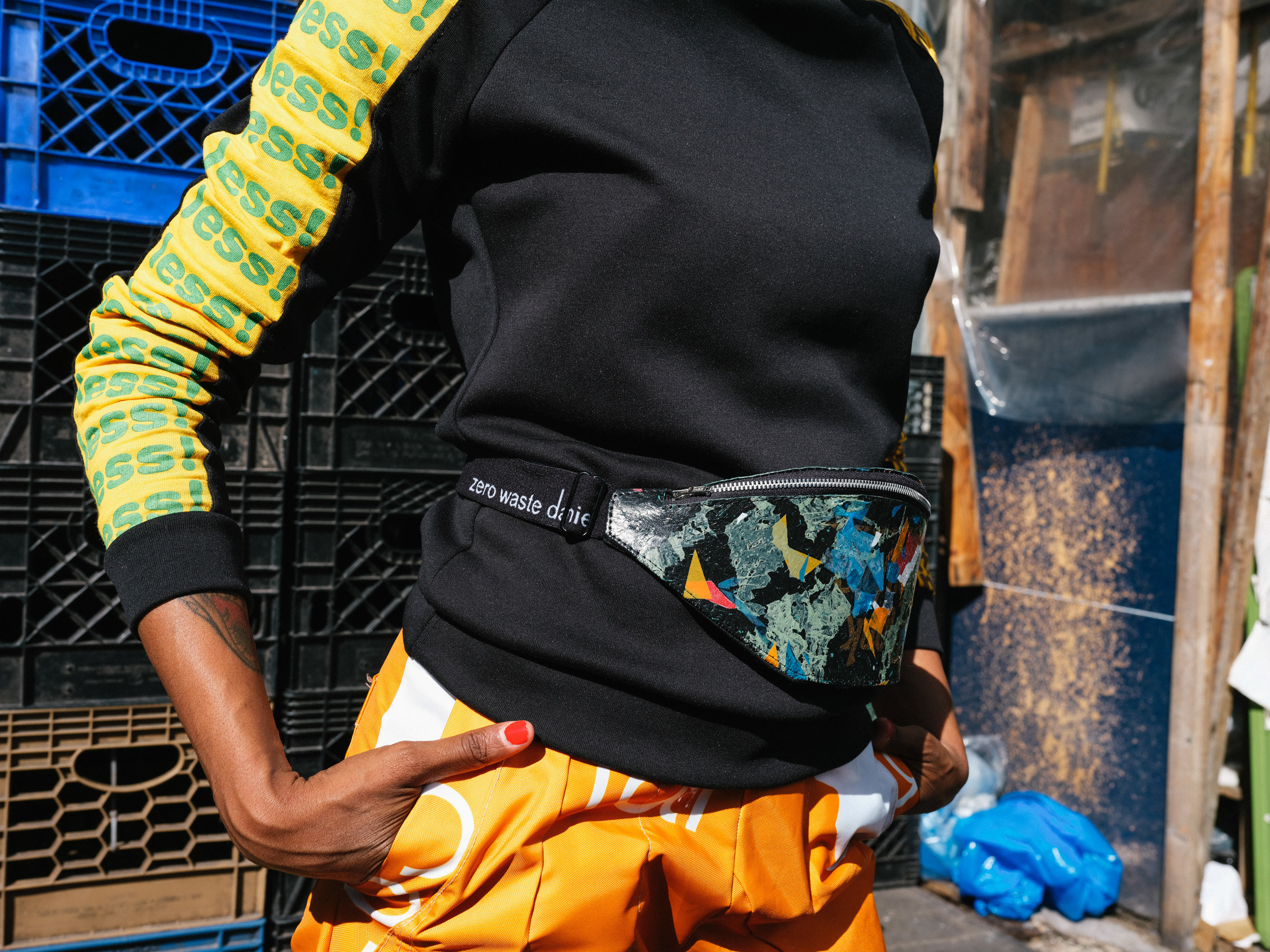 April Harris, Deputy Chief at New York Department of Sanitation with 20 years of service, wearing a long sleeved shirt and a city street fanny pack made from recycled plastic. 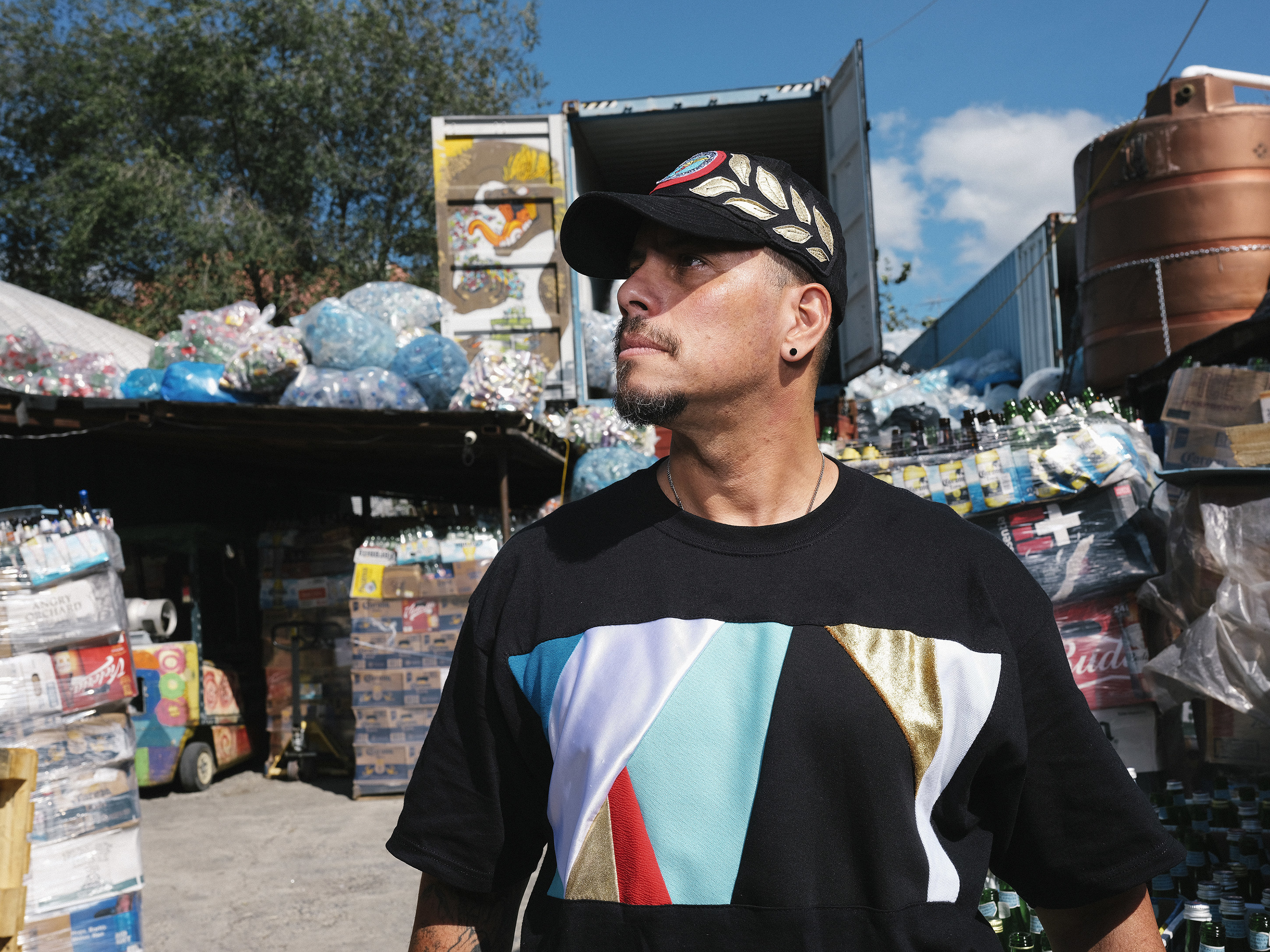 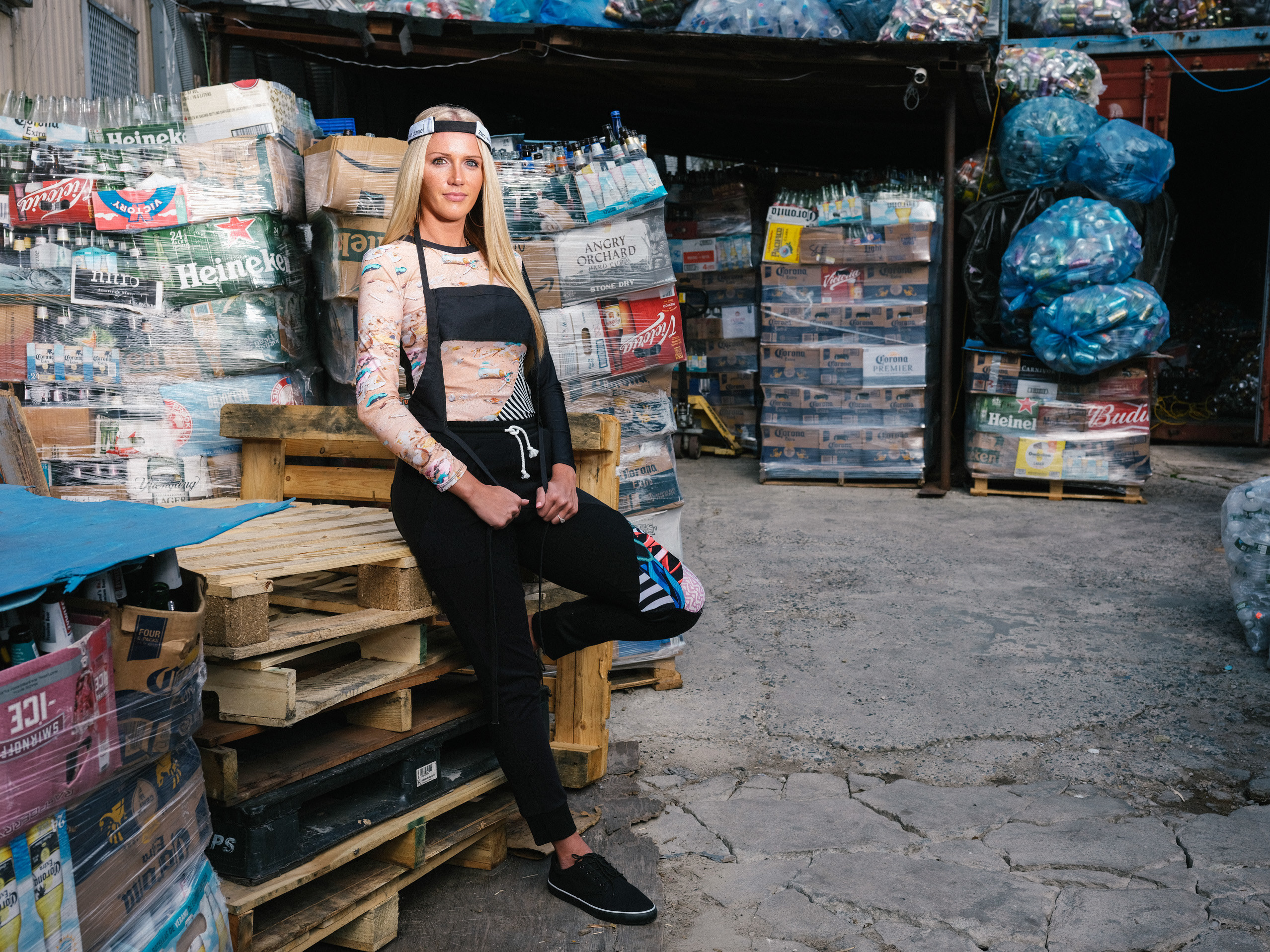 Megan Harvey, a sanitation worker at New York Department of Sanitation with a year of service, wearing a repurposed apron, visor, and shirt featuring a print of plastic bottles and other garbage. 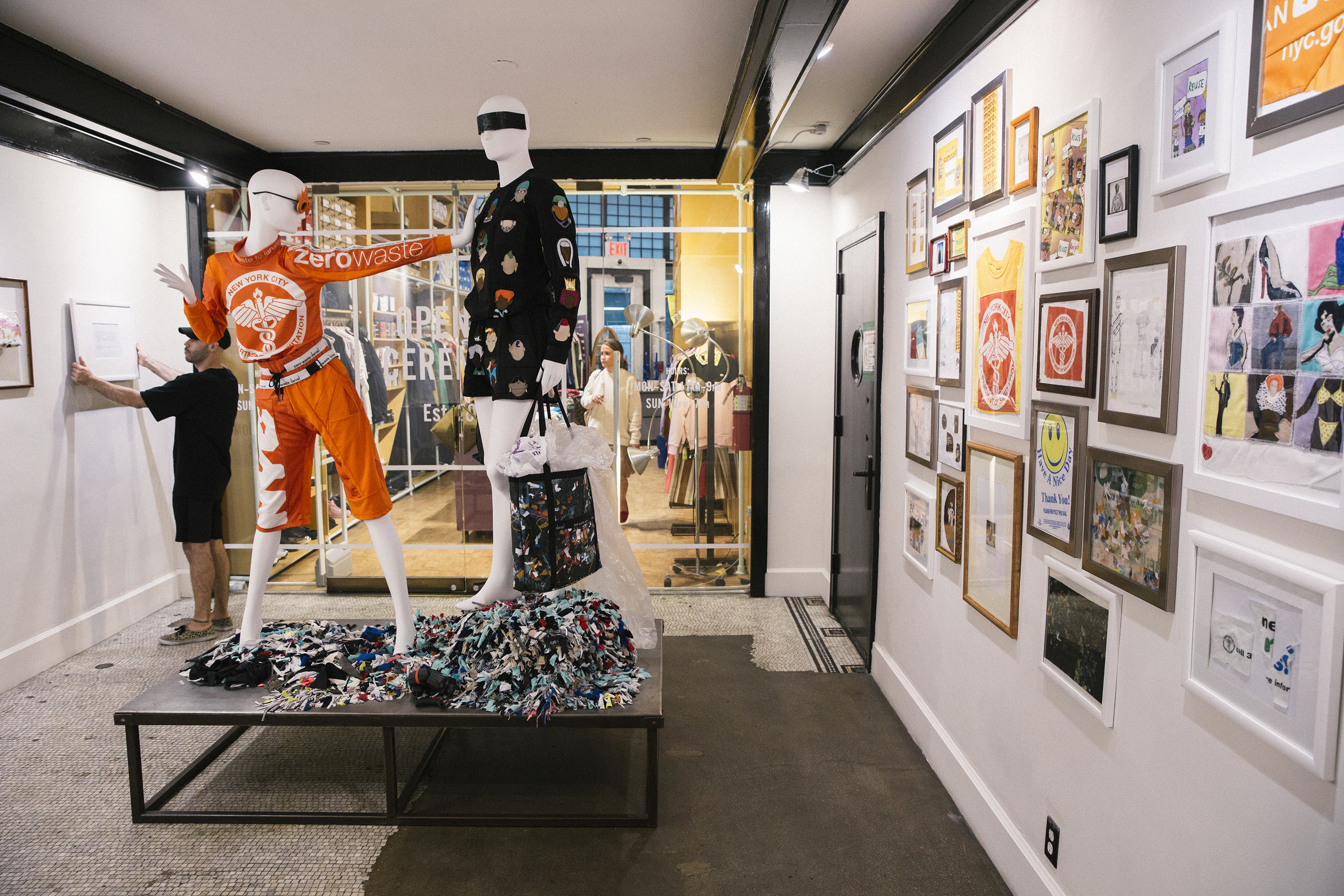 The Zero Waste Daniel gallery installation at the ACE Hotel in Manhattan.