DAVID BOWIE: FINDING FAME 9 p.m. on Showtime. “I think there’s a lot of searching to find the individual within oneself,” David Bowie says in a recording near the beginning of this documentary. It’s in some ways a thesis statement of the film. “Finding Fame,” the final installment of a trilogy of Bowie documentaries from the English filmmaker Francis Whately, explores a period of Bowie’s career starting in 1965, around the time he dropped his stage name of Davie Jones in favor of Bowie, to 1973, when he dropped the Ziggy Stardust persona that had cemented his stardom. Produced by the BBC, the documentary shows an artist during a period of both commercial and self discovery. 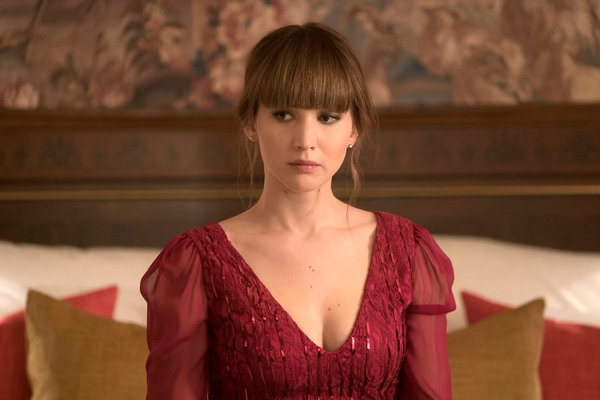 RED SPARROW (2018) 5:35 p.m. on HBO2. In Darren Aronofsky’s “Black Swan,” Natalie Portman plays a New York ballerina who finds darkness and violence in her dancing. In Francis Lawrence’s “Red Sparrow,” Jennifer Lawrence takes it several steps further by playing Dominika, a Moscow ballerina who pivots from a prestigious career dancing for the Bolshoi to become a murderous spy. In her review for The New York Times, Manohla Dargis called the movie “preposterously entertaining,” and wrote that Lawrence “goes all in, seamlessly meeting the movie’s physical demands — whether she’s dancing onstage or crawling in blood — while turning Dominika into a character who grows more real with each unreal scene.” Lawrence will also be on the hunt Friday night in THE HUNGER GAMES: CATCHING FIRE at 7 p.m. on USA Network.

STREET SCENE Stream on BroadwayHD. Kurt Weill finds opera in a New York City tenement in “Street Scene,” his late ’40s adaptation of a play by Elmer Rice. With lyrics by Langston Hughes, the show melts together the sensibilities of American musicals and European opera, exploring love and conflict between a set of neighbors and families over the course of two sweltering New York days. This production, with stage direction by the English opera director John Fulljames, was recorded last year at the Teatro Real in Madrid.

ROCKO’S MODERN LIFE: STATIC CLING Stream on Netflix. With its surreal inclinations, anthropomorphic Australian wallaby main character and theme song sung by members of the B-52’s, “Rocko’s Modern Life” stands among the likes of “Rugrats” and “Hey Arnold!” as a quintessential slice of childhood nostalgia for many who grew up in the 1990s. This new special brings the long-dormant Rocko and company to the 2010s, where they’re confronted with smartphones and 3-D-printed comic books.

RAISING ARIZONA (1987) Stream on Starz; Rent on Amazon. Google Play, iTunes, Vudu and YouTube. In a recent interview with The New York Times Magazine, Nicolas Cage reflected on his oddball performance as a baby-stealing former convict in this early Coen brothers comedy. “Perhaps there was confusion about where I was going, but the Coen brothers went along,” Cage said. “They didn’t mind that I was channeling Woody Woodpecker. They, on some level, got it.” Revisit the movie — the second feature from the Coens — to see what he’s talking about.

Gabe Cohn writes about television, fine art, film and other topics related to culture and the arts. He joined The Times in 2017.