During the pandemic, wind chill and loaner blankets are the new considerations (don’t forget your handwarmers). 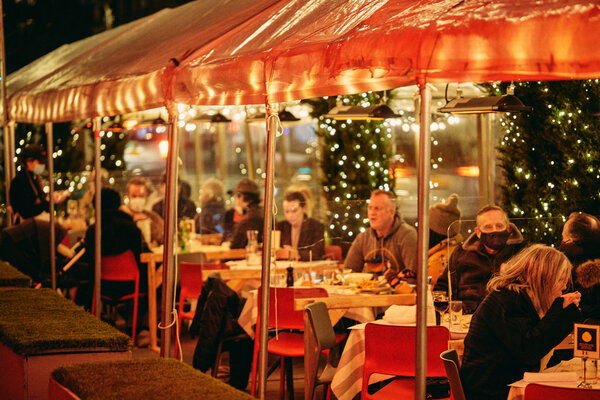 When the weather turned cold, Rachel Sugar, a contributing writer for the New York City food blog Grubstreet, thought people would give up dining al fresco. But, she said, that hasn’t been the case: “Restaurants, more than ever, are a place where people feel relatively comfortable.”

Indeed, in cities around the country, restaurants have adapted for colder conditions and diners are proving game, even in northern latitudes. On a recent weekday in Portland, Maine, where the high was 28 degrees, the eatery Little Giant turned its back patio into an outdoor dining deck, with 35,000 watts of electric heat. In Seattle, the seafood spot Westward has installed two fire pits to keep patrons cozy. Scarpetta, in New York, built private dining “chalets.” It’s a testament to local food cultures and the universal human need for social connection that people are willing to eat outside in the depths of winter.

But between the not freezing part and the not getting Covid-19 part, if you decide to visit a restaurant, eating out has become something you need to plan for: Whose outdoor setup promises warmth, what to wear to battle the elements, what to order that won’t get cold as soon as it hits the table (or maybe will still taste good even if it is cold). Getting a table used to be the main concern. Now you have to think about wind chill and the chance of snow.

How are diners and restaurateurs making it work? Here, the new rules for eating outside.

The pandemic diner will quickly discover that every restaurant offers its own version of the outdoor experience. Heated, custom-designed tents called Yurt Villages, a collaboration between American Express and the dining app Resy, have been set up at 13 in-demand restaurants across the country, including Zahav in Philadelphia and Arlo Grey in Austin, Texas. Many more eateries have erected cheap, rustic structures made of wood or plastic, which Ms. Sugar of Grubstreet has codified by architectural style, from Upmarket Shanty to Cold-Weather Cabana. You’ll want to do some research to know exactly what the set up will be — are there heaters at every table? Blankets on loan? How windy and exposed is the location?

“I generally won’t go to a restaurant without having seen their outdoor situation beforehand,” said William Li, a founder of The Hao Life, a wellness brand, who on a recent week ate out in New York nearly every night. “A lot of them are just tables outside without any heating whatsoever. Even if you’re dressed appropriately, it’s not comfortable.”

Jessica Siskin, a food artist behind the popular Instagram account Misterkrisp, follows the same rule but for different reasons. Ms. Siskin won’t eat inside plastic enclosures or structures that approximate indoor settings. “I don’t think of plastic as a ventilated material,” she said.

Ms. Siskin does a scouting mission, she said, for her sake and the restaurant’s: “The last thing I want is to get to a restaurant, feel uncomfortable and leave. That’s a reservation that could have gone to someone else.”

Which brings up another point about planning: Make a reservation where you can. Many restaurants are operating with far fewer tables than normal, and on weekends (at brunch especially, when it’s relatively warmer) those tables fill up fast.

Jeremy Levitt, a founder of Parts and Labor Design, a hospitality design firm, has a piece of advice about dress. “Go as if you’re having a hot toddy outside in front of a bonfire that doesn’t exist,” he said.

Mr. Levitt, who lives in Manhattan, has learned the hard way that his feet become blocks of ice when he sits outside for an hour or more. He’s taken to wearing warm shoes with a few layers of socks, and he and his wife and children also make sure to bring blankets.

With their beanies, winter jackets and gloves, outdoor diners have the look of winter athletes. Erika Chou, a Manhattan restaurateur who operates the spots Kimika and Wayla, has seen people come in “with a full snowboarding outfit, like Burton head to toe,” she said.

Mr. Li swears by fleece-lined Heattech pants from Uniqlo and thick wool socks from L.L. Bean. Ms. Siskin has “a couple of tricks I picked up,” she said, including layering long underwear beneath her jeans and a thin Patagonia liner under her coat.

On a recent night, “I went out to dinner and wore those air-activated foot warmers that you buy for skiing,” she said. “I also got this hand warmer that’s been a game changer,” a rechargeable model by Ocoopa.

Restaurant owners are helping their customers stay warm, too. At the Odeon in New York’s TriBeCa neighborhood, there are the ubiquitous infrared heat lamps, along with microfiber blankets to rent for $7 or purchase for $20. The restaurant also has mylar blankets like the ones given to marathon runners for customers to use for free. Many other restaurants are providing blankets, too, which they wash or dry-clean after each use.

Even the best dishes don’t taste as good cold, so it’s worth considering how a restaurant has adapted.

Back in the fall, Cédric Vongerichten, the chef and owner of Wayan, which serves Indonesian food with a French flair, found that dishes like lobster noodles were getting cold in minutes. Inspired by his childhood in France, Mr. Vongerichten introduced a burner device like the ones for cheese fondue, which plugs into an electrical outlet at select tables, a concept he calls Indo-Chalet.

In addition, Wayan’s kitchen staff now plates hot dishes in cast-iron pans, which Mr. Vongerichten said would retain heat throughout a meal. Off the menu? Es Teler, a shaved ice dessert. And while the restaurant still offers ice cream, servers are suggesting hot desserts like a cookie baked in a cast iron pan.

When ordering, it helps to think about your courses, to minimize having dishes sit on the table for too long or to focus on warming items.

At Heights Café in Brooklyn Heights, a popular brunch spot even on frigid days, soups and hot toddies have become popular orders. The Odeon has been selling a lot of French onion soup and cassoulet, said the owner Lynn Wagenknecht.

It makes sense to adapt your appetite to the weather, as well. Shanise Djuhari, a dental resident who lives in Brooklyn, recently ate outside on a very cold, windy and rainy day. “I typically don’t go for stews,” she said. “But that day, we had a couple of stews on the table. It seemed weather appropriate.”

Even if a restaurant’s menu pays no deference to the cold, there are simple ways to warm up. “I always order hot water,” said Ms. Chou, the restaurateur. “I think that helps. It’s good for your digestive system as well.”

Do a time and temperature check.

With daylight hours limited, lunch is the new dinner, and dinner begins at an hour more common to retirement communities.

At Kimika, Ms. Chou now starts dinner service at 4 p.m. “It’s lighter out so maybe slightly warmer,” she said. “I’m sure people are trying to eat at earlier times when there’s less crowding.”

Ms. Wagenknecht said 4 to 8 is her busiest time on weekends. And anyway, a lingering, late-night meal is virtually impossible: In New York State, restaurants must close by 10. Massachusetts also enacted a 10 p.m. curfew, while other states and cities (like Chicago, which requires restaurants to close one hour later) have similar rules. The compressed dinner service may mean that your restaurant will no longer hold a table if one or more guests arrive late, so maybe ditch you friends who are always texting that they’re five minutes away.

“We have such a small window of service, if everyone’s late, we lose half a turn,” Ms. Wagenknecht said.

In addition to being conscious of time, check the weather during your planned dining hour.

Even worse than the cold, rain or snow is the wind. It rattles under canopy roofs, renders the portable heaters useless and frays the servers’ nerves. On blustery days, it’s better to stay home.

For Mr. Levitt, who dines outside frequently, the cold is “part of the fun,” he said. “I’m going out to dinner and I’m going to be sitting outside for an hour. People need to embrace that.”

Mr. Li expressed a similar sentiment. He said he has adopted a Scandinavian approach to dining out: There’s no such thing as bad weather, only bad clothing.

Ms Wagenknecht perhaps sums it up best, with advice for eating outside if not for life itself: “If you don’t approach it with a spirit of fun and adventure, you’re probably going to be miserable.”