LONDON — Since the National Gallery’s blockbuster “Artemisia” exhibition opened in October, art lovers have had to jump through hoops to see it.

Travel restrictions have kept international visitors away, the fear of catching the coronavirus hangs over the city’s public transportation system, and rolling lockdowns — or the threat of them — have made life in England uncertain. The latest national shutdown closed the museum entirely from Nov. 5 to Dec. 2.

If those circumstances make a visit to London sound unappealing, there is an alternative: a “virtual tour” of the show on the museum’s website.

In that half-hour video, Letizia Treves, the show’s curator, takes viewers on a walk through the gallery, pausing in front of a host of Artemisia Gentileschi’s huge, brightly lit paintings, picking out tales from the painter’s life as the camera zooms in on the sometimes gory details of her work.

Since the start of the pandemic, digital tours like this have proliferated, giving viewers at home free access to museums while their doors are closed or visitor numbers limited. The online offerings range from scrappy clips filmed on iPhones and broadcast via Facebook to slick interactive websites.

But what makes the National Gallery’s virtual tour stand out is that to watch it, visitors have to pay.

“Clearly, a film doesn’t substitute for being here,” said Chris Michaels, the National Gallery’s digital director. “But it’s a new way of letting audiences in,” he added, “and of us generating income, obviously.”

The National Gallery began the tour last month. It costs 8 pounds, about $10.70 — a ticket to enter the show in person costs £20. It comes at a time when museum finances in Britain are stretched, with many institutions laying off workers.

A few days after the National Gallery introduced its paid digital tour, another London institution, the Design Museum, released a “virtual experience” of its own. Based on its “Designs of the Year” exhibition, the tour, which costs £5, lets users move around a photographic reproduction of the show using their mouse. When they click on an item — like a self-sanitizing door handle that could help limit the spread of the coronavirus — a box pops up with more information about the object’s use and how it was made.

On Dec. 17, the Design Museum will also offer an online tour of its popular “Electronic” exhibition about the history of dance music. The video tour will feature curators talking about the objects on show, as well as interviews with musicians and designers whose work is featured, such as the French musician Jean-Michel Jarre, whose “laser harp” is on display. 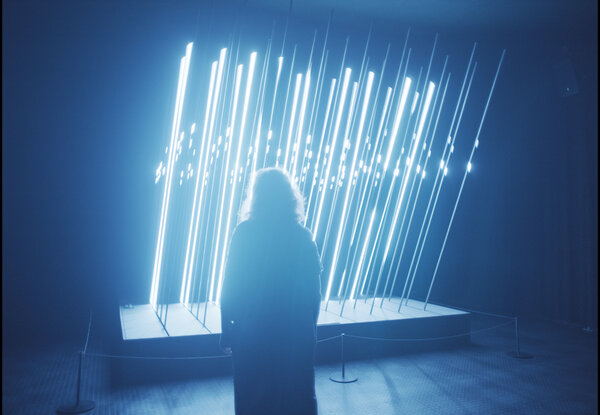 “Electronic” has been a popular show for the Design Museum. With reduced entrance numbers because of the coronavirus, the exhibition has sold out on many days. But overall attendance at the Design Museum, and at the National Gallery, is down around 90 percent since the pandemic began.

The British government this year provided a $2 billion bailout for arts organizations but has also urged museums to do more to raise money themselves. In August, the British culture minister, Oliver Dowden, wrote to the country’s leading museums, including the National Gallery, telling their administrators to “take as commercially-minded an approach as possible.” If they didn’t, he added, “I will not be in a position to make the case for any further financial support for the sector.”

Mr. Michaels of the National Gallery said that the letter from the minister had not played a part in the decision to charge for the virtual tour. “This isn’t to tick some box,” he said.

Since June, the museum had been trying out a host of paid online offerings, including educational courses, he said. “This is just the next step,” he added.

Some museums in the United States have experimented with charging for online tours — but these have been small, private affairs, rather than on-demand media for a large audience. The Metropolitan Museum of Art in New York, for example, offers a service in which an educator meets a group online to talk through works from the collection.

Kathryn Galitz, who manages this program for the Met, said in a telephone interview that the museum had done more than 80 digital events so far this year, including birthday parties and a meeting of an all-female art history society.

But the Louvre in Paris, which is closed because of a second lockdown in France that is scheduled to last until Dec. 16, said in an emailed statement that paid virtual tours were not on its agenda. The museum’s digital content was all free, “to keep the link” with potential visitors when closed, the statement added.

Bart Ooghe, a spokesman for the Museum of Fine Arts in Ghent, Belgium, said in an email that his museum had not considered charging for virtual tours of its shows, including its much anticipated Jan van Eyck exhibition. This was billed as a “once in a lifetime” experience, but it closed just weeks after it opened, in March. The museum’s marketing campaign in the prelude to the show had stressed that it needed to be enjoyed in person, Mr. Ooghe said, “So we felt that it would be difficult, on a moral level, to now begin charging for the digital experience.”

Ms. Treves, the presenter of the National Gallery’s tour, said in a telephone interview that she had not actually watched many virtual visits herself. She tried one, she said, in which the idea was to drag a computer mouse around to look at paintings onscreen, but she found the experience frustrating. “By room 2, I stopped,” she acknowledged.

But, she added, she would happily pay to see a video tour of an exhibition, such as the van Eyck show, if it was her only hope of seeing it.

“I think many people feel the same about this show,” she added, referring to “Artemisia.”

Mr. Michaels, the gallery’s digital director, declined to answer how many people had watched the film so far, other than that it was pulling in “a good few hundred” on some days. That would add up to just a few thousand dollars for the museum.

But to think about it in those terms was missing the point, Mr. Michaels said. “This is about engaging audiences in new ways,” he said. “Especially those who can’t get here.”