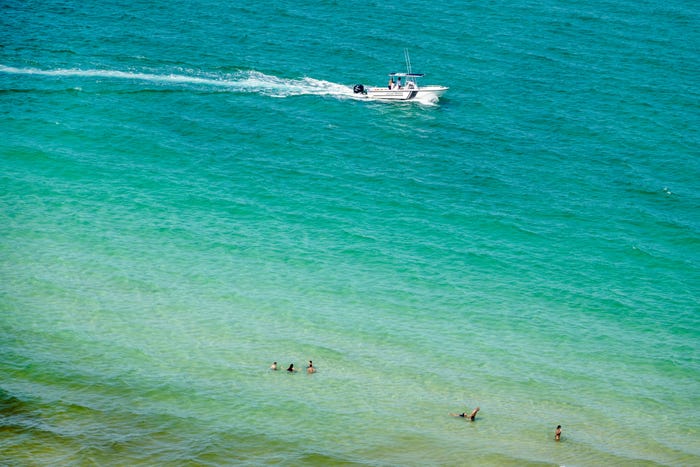 Kevin Cozzi didn't think twice about jumping in when he saw a mother and daughter struggling in the surf this summer in Monterey, California.

"I've been swimming since I was 3 years old competitively, so I felt like I could get to them," he told KFSN ABC 7 Texas. "I ran out there and as soon as I got to the mom, I just told her to give me her daughter because I knew she was struggling."

Hayley Whiting, 10, was visiting from Texas and wasn't that familiar with the ocean, so she was terrified when she became caught in a rip tide.

"I was thinking this is not happening. There's no way I'm being pulled out," she told KFSN.

Her mom, Samantha Whiting, jumped in to try to help Haley, but was also in danger. First Cozzi reached them, and then the lifeguard at the beach pulled everyone to safety.

When Whiting finally tracked down Cozzi's identity through  Facebook, she decided to return his act of kindness by launching a GoFundMe account to help Cozzi and his fiance pay for their wedding.

"We yelled for help and Kevin Cozzi without hesitation swam out and grabbed her from me," Whiting wrote on the fundraiser page. "If it wasn't for him risking his life in such a selfless act I would have lost not only my own life but my baby girl. I want to raise money for Kevin and his fiancé to have their dream wedding and honeymoon, any amount helps and is much appreciated. Lord knows he deserves so much more than this."

The fundraiser quickly took off, and has now raised over $25,000 for Cozzi and his future wife.

"I hope this money will help not only with their wedding but for a down payment on a house," she wrote on the page in a November 1 update. "Kevin and his fiancé are still so humble saying they don't deserve this. I feel like if I had the money to give them anything in life I would, because they saved my world, my child. My family will now have a bond with this man and his family forever, we ARE family now."

In fact, the Whitings are now on the guest list for Cozzi's wedding, planned for fall 2021.

Despite the public outpouring of thanks, Cozzi said that his real reward was knowing that Haley was ok.

"That girl being saved was enough for me, honestly," he told KFSN.