No one who cares about performance should miss this gorgeous, extraordinary celebration of the human from one of Australia’s great success stories in the arts.

Under director Yaron Lifschitz, the Circa ensemble has become globally recognised for its innovative and influential style of circus, which expands the vocabulary and emotional palette of the form, exploring fertile borderlands with physical theatre and contemporary dance in a way that deepens the impact of the physical genius on display.

No one should miss this gorgeous, extraordinary celebration of the human from one of Australia’s great success stories in the arts.

Humans sets out to investigate human limits using an art that pushes and at times spectacularly defies them. But it begins with a simple acknowledgement of human vulnerability: the audience enters to find acrobats, one by one, partially disrobing, and folding their clothes into piles. 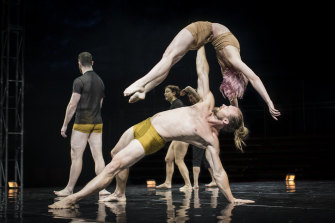 Circus is about the “gift of weight”, says director Yaron LifschitzCredit:Pedro Greig

With a playful illusion, the piece leaps into life, and soon swirls into intricately choreographed ensemble work, performed with a breathtaking balance between individual creativity and synchronised movement.

It’s a performance that will leave Hamlet’s speech marvelling at human capacity ringing in your ears (“What a piece of work is a man! … In form and moving how express and admirable; in action how like an angel”) – yet the wonder is amplified, and complicated, by the leitmotif of physical limitation.

A subtly crafted study of the human condition that will leave you to muse on the wonder and fragility of life.

These wingless angels sometimes run up against the hard edges of actual impossibility. Humans can’t lick their own elbows, though it doesn’t stop these artists trying.

At other points, there’s a self-imposed artistic constraint – rather like Georges Perec writing an entire novel without using the letter "e" – as when a brilliant, muscular display of one-armed handstands is performed by an acrobat whose legs have stopped obeying him.

Balance, flexibility and strength are tested to the point of extremity. There’s the precariousness of an artist dangling, on the very verge of falling, from trapeze. An astonishing feat of strength sees a performer carrying five colleagues on his shoulders at once. Aerial contortion and graceful acrobalance almost seem to reinvent the human form before your eyes.

The show’s design elements – simple, elegant lighting and an eclectic soundtrack that jumps across emotions and continents – are precisely calculated to burnish the ensemble’s physical mastery. The result is spectacular, but also a subtly crafted study of the human condition that will leave you to muse on the wonder and fragility of life.