Since the debut of Voice Notes this past May, Alex Vaughn shared three singles, had several amazing performances – including her recent sets at Broccoli City and ONEMusic Fest – and amassed countless fans and support through her music. On October 7, this DMV songstress dropped her highly-anticipated The Hurtbook EP, which further solidified her place as one of the most talented newcomers in R&B.

Throughout the 8-track album, Vaughn gives her perspective on the emotional toll that relationships can have on a person, but also shows her listeners that they all have both the strength, as well as the ability, to move on. It had been several months since her last major release, and Vaughn has a lot to say because of it. “I feel so relieved,” the singer tells ESSENCE. “It’s been so long since I put out a project and this is the most recent reflection of who I am and where I am, and I’m just excited to share that.” 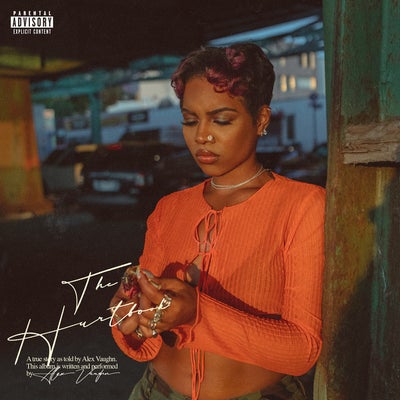 “It originally started out as a compilation of ‘situationships’ with a certain person,” she continues. Then I realized that all of the scenarios weren’t just exclusive to me and the person – the same characteristics were going into my friendships and just interactions with other people.” Interestingly enough, this EP examines just how important life’s platonic connections can be. Just because a relationship lacks the aspect of romance; it doesn’t take away the level of intimacy that one can experience.

The Hurtbook begins with the song “So Be It,” which was directly based on the current dynamic between the LVRN artist and one of her oldest friends. “We kind of started having a fall out,” she says. “It wasn’t because we had an argument, it was just because life and times were just changing.” Following the intro was the uptempo “Keep That Energy,” where Vaughn dismisses a past lover’s advances in order to get back into her life. The lyrics along with the stellar production made this record one of the best listens on the EP.

“Mirage,” the album’s first single, is about taking accountability for one’s actions – either good or bad, and how it’s perfectly ok to call yourself out on things, as long as you know how to remove yourself from a situation that may be detrimental to your well-being. After “Talkin,” the album moves to a point of optimism, so to speak. “Demon Time” and “Do You Ever” were cuts that spoke on love, physical affection, and the range of emotions that come with relationships built on passion.

With this new EP, Vaughn presents her life as a journal for all to see. For her however, the album’s title means more to her than what meets the eye. “I wanted to call it The Hurtbook because you’re not broken, you’re just hurt,” she says. “And every experience that you go through is a part of your story.”

“I feel like we’re in a space where we want to grow and be these people that we’ve wanted to be since we were younger and you think that in order to get there we have to start fresh, let go, or forget about the things that got us to this point,” the singer adds. “I just wanted to reclaim all of the power in these moments.”