She was an under-the-radar figure in New York and Paris in the formative 1950s and for decades after. She died of Covid-19. 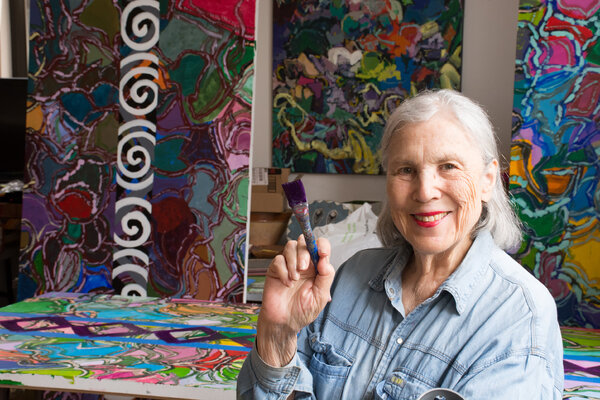 This obituary is part of a series about people who have died in the coronavirus pandemic. Read about others here.

Caradoc Ehrenhalt would often accompany his mother, the artist Amaranth Roslyn Ehrenhalt, on her visits to the Louvre in Paris, the Metropolitan Museum of Art in New York and other leading museums and galleries. She enjoyed taking a close-up look at the works, many of which were by artists she had known personally.

Mr. Ehrenhalt loved those trips. The museum guards? Not so much.

“She would get very close to the art and point out details and techniques, her finger getting close,” her son said by email. The guards would rush over, issuing that don’t-touch warning.

Ms. Ehrenhalt was a multifaceted artist best known for her paintings. She was part of the second generation of Abstract Expressionists, working first in New York in the early 1950s, then in Paris, producing canvasses full of vibrant colors.

“Her work reminded me of the scorching heat of the summer of my native Brazil,” Denise Carvalho, a curator and art scholar, wrote in White Hot Magazine in 2018.

Ms. Ehrenhalt spent much of her life in Europe, which left her less well known in the United States than many of her contemporaries, but her work, which included prints, tapestries and mosaics, has been gaining new attention in recent years. She was still making art in her East Harlem apartment in her 90s.