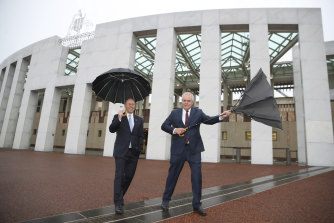 Morrison and Treasurer Josh Frydenberg had just stepped into Wednesday morning to try to sell their record-busting Budget deficit.

Nothing quite went to plan.

Rain fell, forcing Frydenberg to cancel his planned jaunty early-morning walk to Parliament for the cameras.

The photo opportunity devolved into a mere step or two beyond the parliamentary portico beneath umbrellas.

And then came the wind. 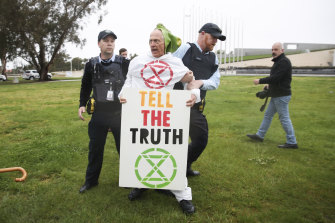 An Extinction Rebellion protester spruiking the danger of climate change being restrained by police.Credit:Alex Ellinghausen

Not far away, a couple of Extinction Rebellion protesters turned up in white boiler suits. Keen on making loud arguments about the danger of climate change, they found themselves restrained by police.

Nothing, of course, had been familiar about this year's COVID-19 budget.

Press gallery journalists were locked in their normal offices to read the budget papers on Tuesday. It was a pale version of the normal cast of hundreds flying in to be locked away in a wing of committee rooms. 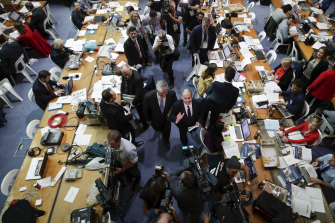 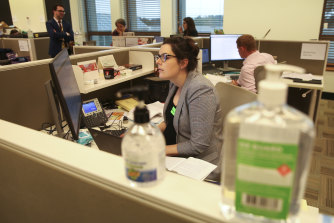 This year journalists covered the budget from their usual press gallery offices to be COVID-safe.Credit:Alex Ellinghausen

The public galleries, normally packed with government supporters, were empty as Frydenberg delivered his budget speech at 7.30pm.

There were no big post-budget fund-raising dinners or drinks parties in the Great Hall.

And even outside, the "budget tree" – a magnificent maple that dazzles in blazing red during the normal autumn budget sitting – was little more than just another tree wearing the green leaves of spring. 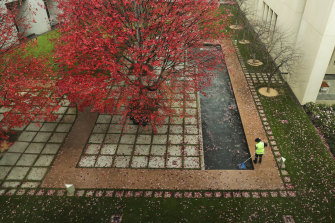 Leaves are scooped from the pond below the ‘budget tree’ in May, when the budget was due to be handed down before being delayed by the pandemic.Credit:Alex Ellinghausen 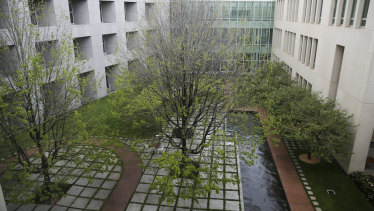 The ‘budget tree’, which is normally a blazing red colour when the budget is handed down, seen in this spring time budget.Credit:Alex Ellinghausen

It was, after all, the time of a pandemic.