Major Australian animal protection organisations have joined forces to create an alliance representing 2 million people with a mission to reform what they say is the country’s broken animal welfare system. 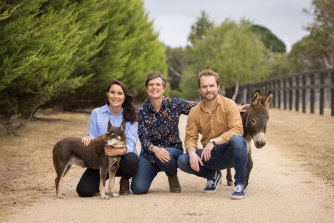 It will be headed by two of Australia’s leading animal welfare figures, Jed Goodfellow and Bidda Jones, who were previously at the RSPCA and Meg Good, formerly at Voiceless.

In an interview with The Sydney Morning Herald and The Age, Dr Goodfellow said the organisation was not ideological nor promoting a vegan lifestyle but simply about bringing Australia’s animal welfare rules into line with community expectations.

“We don’t have an ideological basis to the organisation. This is purely about making sure that the system works effectively and it produces robust animal welfare standards and importantly that the community’s views are actually incorporated into the process.”

He said the organisation’s top priority was having the agriculture minister, currently David Littleproud, and department stripped of their role as the regulator of animal welfare standards in favour of an independent national commission.

“[This is] so we don’t have animal welfare simply delegated to departments of agriculture and ministers for agriculture where animal welfare is very often neglected or is seen to be in conflict with their broader industry productivity goals,” he said.

The issue came under scrutiny after the Awassi Express live export scandal when Phillip Moss’s review found: “The focus on trade facilitation and industry deregulation appears to have had a negative impact on the department’s culture as a regulator.”

Dr Goodfellow said the jurisdiction that Australia could ideally mimic would be New Zealand, which is phasing out all live transportation of livestock, has banned mulesing and outlawed battery hens, all three of which still occur in Australia.

He said animal welfare standards should not lead to extra costs for consumers or farmers and backed the development of a taxpayer-funded grant system that would help producers transition to any new standards.

“You can’t expect farmers to bear the burden of increased costs on their own,” he said. “A classic example would be assisting cage-egg producers to transition away from cages or subsidising the cost of providing pain relief for painful husbandry practices.”