ASDA is giving away free Christmas vegetables with prices slashed from 60p in some stores.

One shopper posted a picture of their store in Swinton, Manchester, which shows broccoli heads, and separate bags of carrots and parsnips reduced from 60p to 0p. 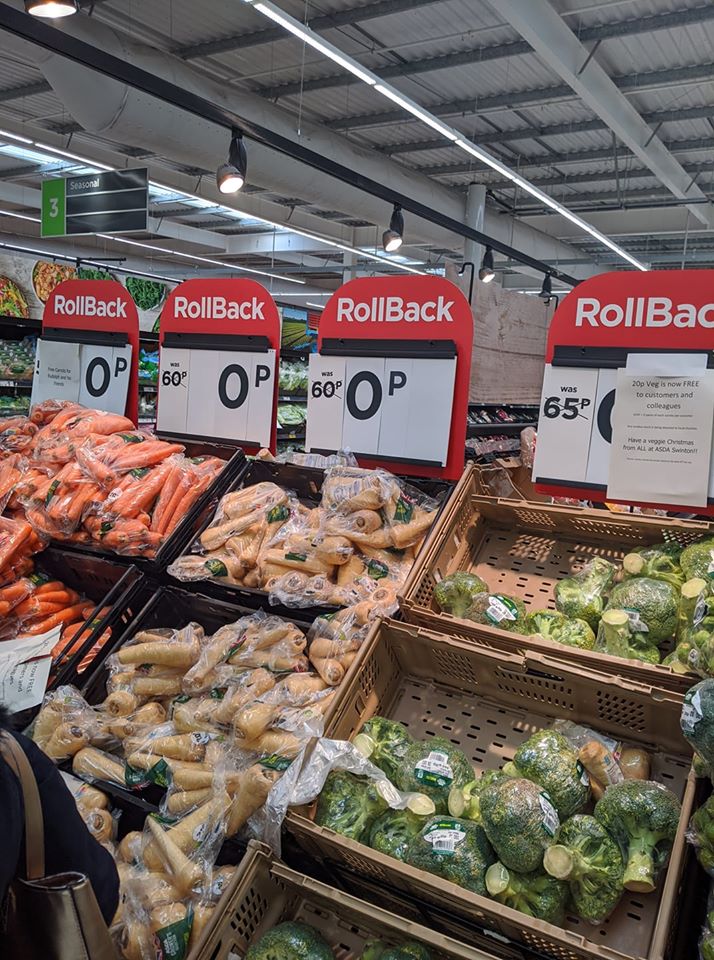 The veg had first been reduced to 20p earlier this month, but a sign next to the leftover stock today said: "20p veg is now FREE to customers and colleagues.

"Have a veggie Christmas from ALL at Asda Swinton!"

The post on the Extreme Couponing and UK Bargains Facebook group has had more than 5,300 likes and 2,500 comments in just three hours.

One person said: "Makes more sense than to waste it."

Another shopper tweeted: "Hats off to Asda. Just been in there and it's selling all its veg for free – that's the Christmas spirit."

Someone else said: "Food banks or homeless would love this!"

Asda told The Sun this isn't a nationwide policy and that it's down to individual stores which are doing this to get rid of surplus Christmas food that will likely go off.

It adds that usually when there's extra stock it redirects it to the charity FareShare, which in turn distributes it to thousands of local charities and community groups across the UK.

But in some areas where charities may not be open or able to receive the food, store managers instead give away unsold fruit and vegetables free to customers and staff.

One shopper said: "Mine was still at 20p an hour ago, not complaining at that price though!"

Someone else tagged a friend writing: "Should of waited till today".

It's worth calling ahead to your local store before making a special trip. Use Asda's store locator to find your nearest.

Also bear in mind most Asda stores shut at 7pm tonight before reopening at 9am on Boxing Day. See our round-up of Asda's Christmas and New Year opening times.

While this year, both Lidl and Aldi have reduced the price of their greens to just 15p a bag.

The Lidl and Aldi deal also includes potatoes, something which Asda shoppers are missing from their discount.

While Tesco reduced bags of carrots, sprouts and parsnips to 19p.