Australia could exceed the carbon emission cuts required by the Paris Agreement, experts say, but it remains to been seen if the federal government’s climate action is ambitious enough to avoid dangerous global warming and international controversy.

Australia’s major trading partners are pressuring the federal government to match their goals ahead of the international climate change summit in Glasgow in November. 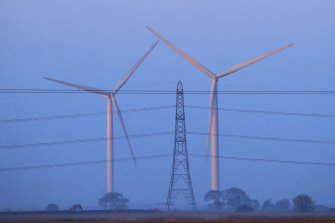 Australia is expected to increase its emissions reduction goals ahead of the Glasgow climate summit, but questions remain over whether it will be enough. Credit:Gareth Fuller/PA

Energy and Emissions Reduction Minister Angus Taylor says Australia is on track to “meet and beat” the Paris target. The government will release an updated emissions reduction projection before the United Nations’ summit in Scotland.

“Australia could claim it was on track to reduce emissions by 28-30 per cent or slightly more by 2030,” Mr Hare said. It could do so by raising the volume of renewable energy entering the power sector, along with the COVID-19 induced declines in industrial emissions, he said.

Renewable electricity gains would likely result from state government policies and businesses making new investments in the sector, he said.

Australia would need to significantly increase its goals to be consistent with the global action required to limit warming to avoid the worst of climate change’s impacts.

Professor Howden said global emissions must fall 50 per cent by 2030 and reach net zero by about 2045 to limit warming to between 1.5 degrees and under 2 degrees.

“At a global level emissions have to reach net zero most likely by 2045, and we have to start reducing emissions very quickly right now,” Professor Howden said.

If global emissions continued to rise until 2050 and the world then miraculously went to net zero overnight, the build up of greenhouse gases would cause the temperature to rise for decades to come.

“Global emissions would need to fall by about 50 per cent by 2030 to limit a global temperature rise to less than 2 degrees,” Professor Howden said.

Richie Merzian, climate and energy program director at the Australia Institute think tank and a former federal government international negotiator on climate policy, said “Australia will be called out at Glasgow” if it doesn’t match the commitments of countries like the US, UK, Japan and South Korea.

“Net zero is not even the bare minimum, it’s the entry fee,” he said. “All eyes will be on what countries are doing in the decisive decade, now, for 2030.”

The federal government’s “technology not taxes” is focused on investments in new technology to lower the cost of cleaner options including hydrogen, energy storage and green steel. The clean energy investment agency recently added soil carbon sequestration and carbon capture and storage to its priorities.