Australia remains open to expelling the Russian ambassador but Foreign Minister Marise Payne says it is still useful to have the direct line of communication to Moscow.

As some countries call for a boycott of the G20 unless Russia is barred from the forum, Senator Payne says there are sensitive issues that need to be worked through. She also repeated her declaration that Russia has committed war crimes by targeting civilians in its invasion of Ukraine. 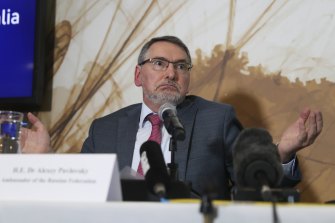 The government still considers the possibility of expelling Russia’s ambassador Alexey Pavlovsky as a “live option”.

“But at the same time, it is potentially useful to have direct lines of communication with, in this case, the Russian government,” Senator Payne told ABC’s Radio National.

“That does not mean the government has excluded that option.”

She noted that while other countries had asked Russian diplomats to leave for “undertaking activities not consistent with their diplomatic status”, that didn’t always include the ambassador or head of mission.

She said the Australian government had engaged with Dr Pavlovsky and other Russian diplomats during the escalation of the war in Ukraine.

Indonesia, which is hosting the G20 summit of world leaders later this year, is coming under pressure to bar Russia from the meeting of major economies.

Senator Payne said there were “very sensitive issues” to work through in relation to the G20 and a range of other international groupings in which Russia participates.

“We’ll work closely with other members of the G20, and particularly Indonesia on this,” she said.

“Russia’s participation in multilateral fora is a very serious issue and it’s something which the international community has to continue to examine.”

Liberal MP Dave Sharma, a former Australian diplomat, said there was “absolutely no way” Russian President Vladimir Putin should be welcomed at the G20 summit.

“He has turned Russia into a pariah nation: that needs to be made clear,” he said.

Senator Payne repeated her condemnation of Russia’s “illegal and unlawful” invasion of Ukraine.