ANY classic literature fans will be well aware of Beatrix Potter's work.

A number of her own famous fictional faces pop up on change designed to commemorate the characters over the years, but did you know there's a 50p to celebrate the author herself? 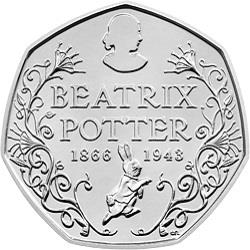 The Beatrix Potter 50p was released into circulation in 2016.

This was to coincide with the 150th anniversary of the birth of the famed writer who invented the likes of Peter Rabbit and Jemima Puddleduck, to name a few.

The coin was designed by Emma Noble and includes elements of some of the best-loved characters in children’s literature as well as featuring a nostalgic font in the inscription.

It's a unique design, but we take a look at exactly how much it's worth, and how rare it is too.

How rare is the Beatrix Potter 50p?

According to Change Checker the Beatrix Potter 50p has a circulating mintage of 6,900,000.

It's dubbed as "common" by the change experts too, though it's a little further up from the bottom of the charts than other 50ps that have been released into circulation.

The coin has a scarcity score of two on Change Checker's latest index.

The scarcity index ranks each of the coins between 1 and 100 to indicate how hard they are to find, as well as how in demand they may be.

The higher the number, the rarer the coin and therefore it's more likely to be more valuable than others.

It's not the lowest scorer, as at least 19 other coin designs rank lower on the scale.

Overall it comes in at 44th place on the November update, but it's also a non-mover from when the stats were last announced in August.

How much is the Beatrix Potter 50p worth?

One circulated copy of the coin has sold for £8 on eBay in the past but the value can change over time and can't always be guaranteed.

Though one buyer managed to sell on a gold proof version for a whopping £574 back in September – the limited edition style is likely what drove up the price however.

Some avid collectors who have managed to complete the whole set though, have managed to sell it on for over £500 too, so it might be worth hanging fire and waiting until you have a few more to sell on at once.

There are a number of Beatrix's Characters on other 50ps like the Peter Rabbit coin and more, so these might help add more value to your Beatrix Potter coin in a sale.

But when you're buying and selling on eBay you have to keep in mind all those hidden charges too, so when you add up sellers fees and postage, to name a few, you might only earn as much as 50p back from your sale – or face value.

Are any other coins in my change valuable?

Much like how the Beatrix Potter coin is a commemorative coin, similar rarities will often be desirable for collectors.

It'll always depend on who you're looking to market your coin to when it comes to sell, as the amount buyers are willing to pay will vary from one to the next.

One literature fan might be keen to spend hundreds just to get their hands on it, while another might only see the coin as worth its face value of 50p.

Some key things to look out for on other coins, that might help you drive up the price too, would be a low mintage or an error that's apparent on the design.

If a coin has a high mintage figure then it's a bit easier to find one in your own wallet, but then it's not as sought after or rare.

You can check how much a coin will typically go for on eBay though.

Sometimes a coin may not have sold for the amount is was listed for, andfakes circulate online too, so keep this is mind.

If you're worried, you can get your change verified by The Royal Mint, that'll also help reassure buyers that they're paying for the real deal – and you may even be able to hike up the price a bit if you go to sell.

You'll also find that online tools from change experts like Coin Hunter are helpful to see how much it could be worth.

Rare coins and valuable notes – is yours worth a mint?