A stunning Grade II-listed Belgravia property that was once home to Prime Ministers Stanley Baldwin and Margaret Thatcher has gone on sale for £23million.

The sprawling residence at 93 Eaton Square consists of a main four-bedroom home and an interconnecting mews house with two further bedrooms.

While it is a charming example of a traditional period property, developers estimate it could be worth up to £30million if the next owner was willing to invest in modernising, extending and integrating the two homes to create a single super-prime property complete with mega basement. 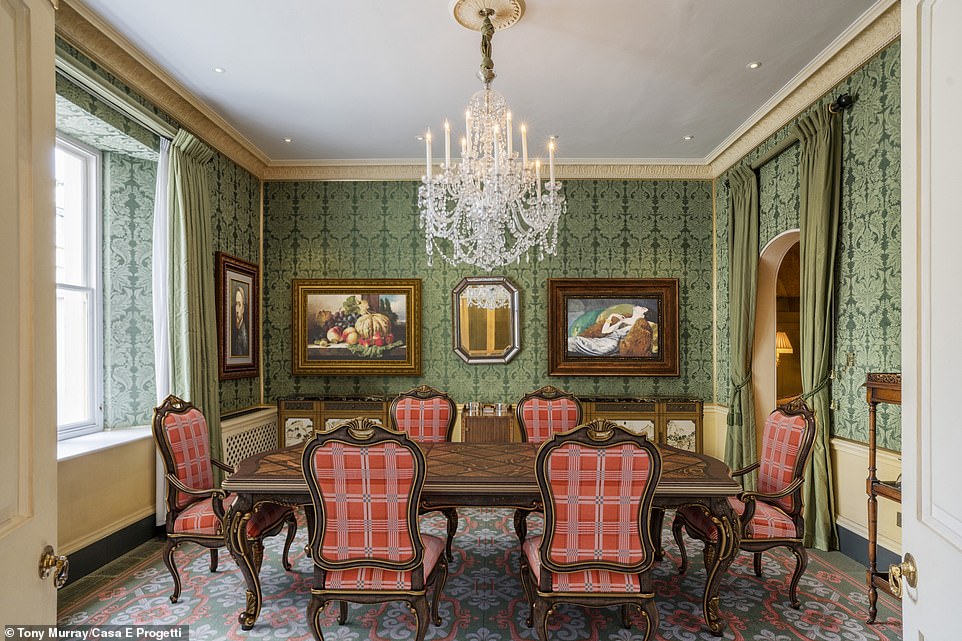 Period features: A Grade II-listed Belgravia property that was once home to Prime Ministers Stanley Baldwin and Margaret Thatcher has gone on sale for £23million. Pictured, the dining room where politicians and royalty have been entertained 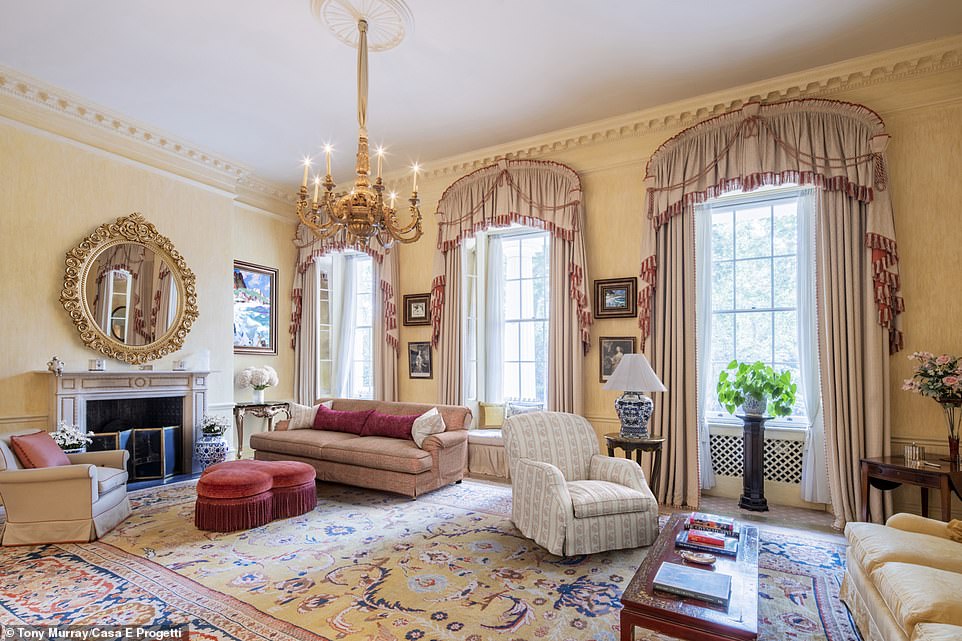 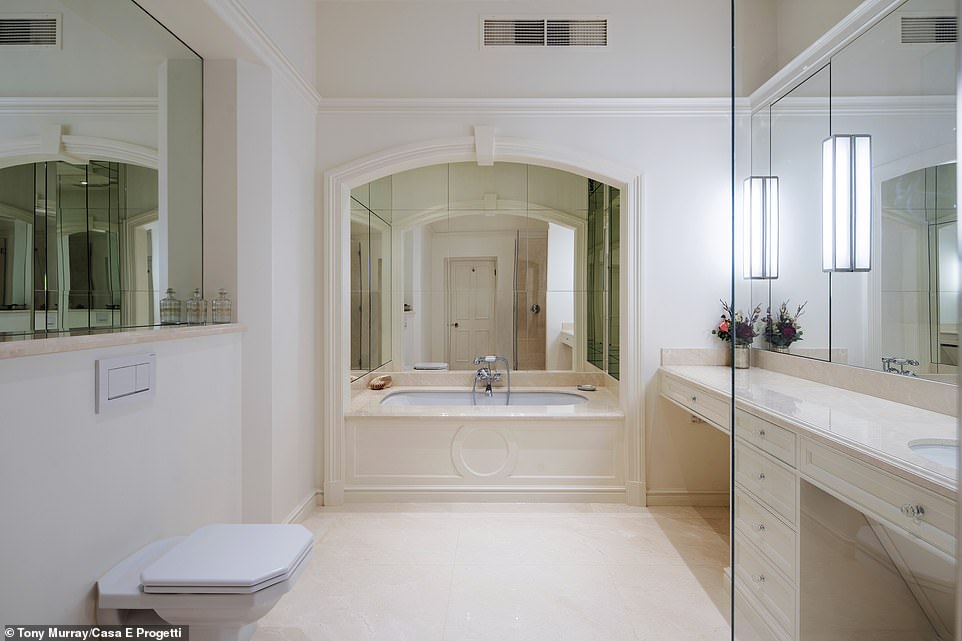 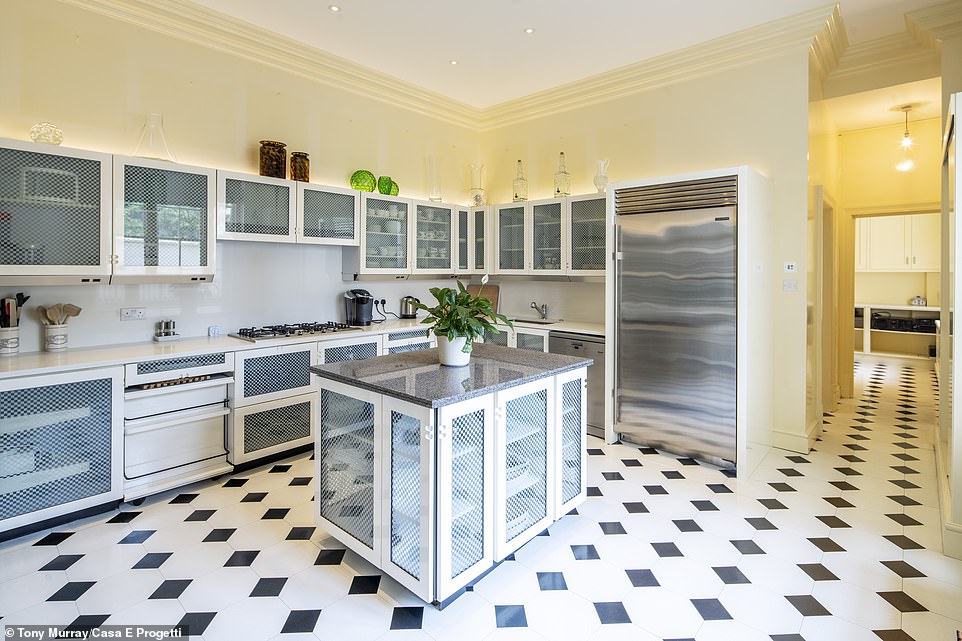 Equipped for entertaining: The dining room in the main four-bedroom property is served by this large family kitchen complete with an island and a separate pantry and utility room (seen through the door on the right) 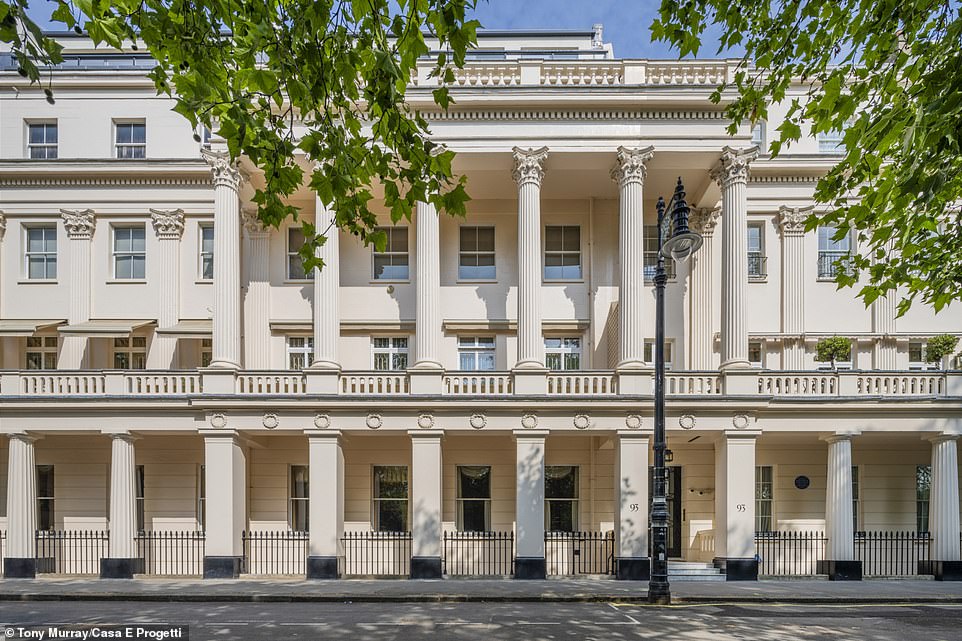 Steeped in history: Built in the 1820s, Eaton Square, is largest private garden square and is encircled by a terrace of grand residences designed in classical style with projecting Doric colonnade and porches 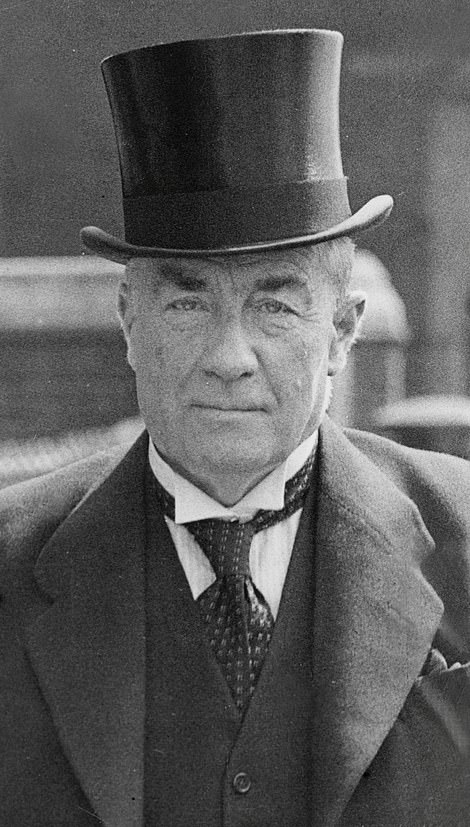 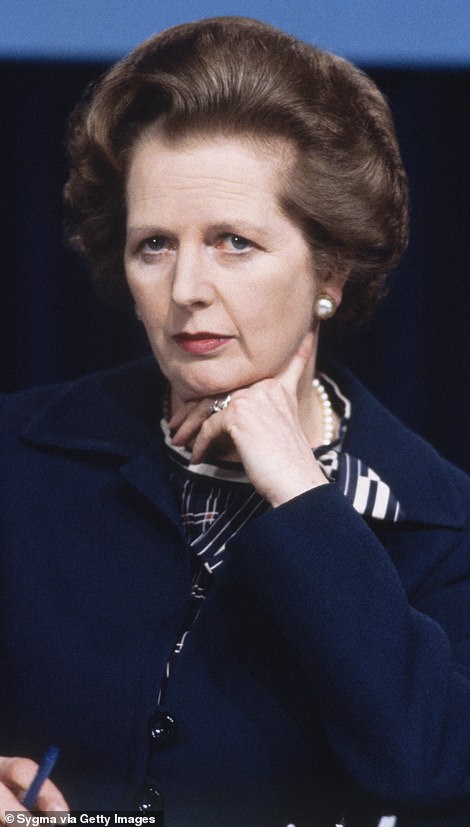 In 1913, Stanley Baldwin (left), then the MP for Bewdley, moved into No. 93 with his wife, Lucy, and their children. In 1990, the property was briefly home to Margaret Thatcher (right) and her husband Dennis after she left office 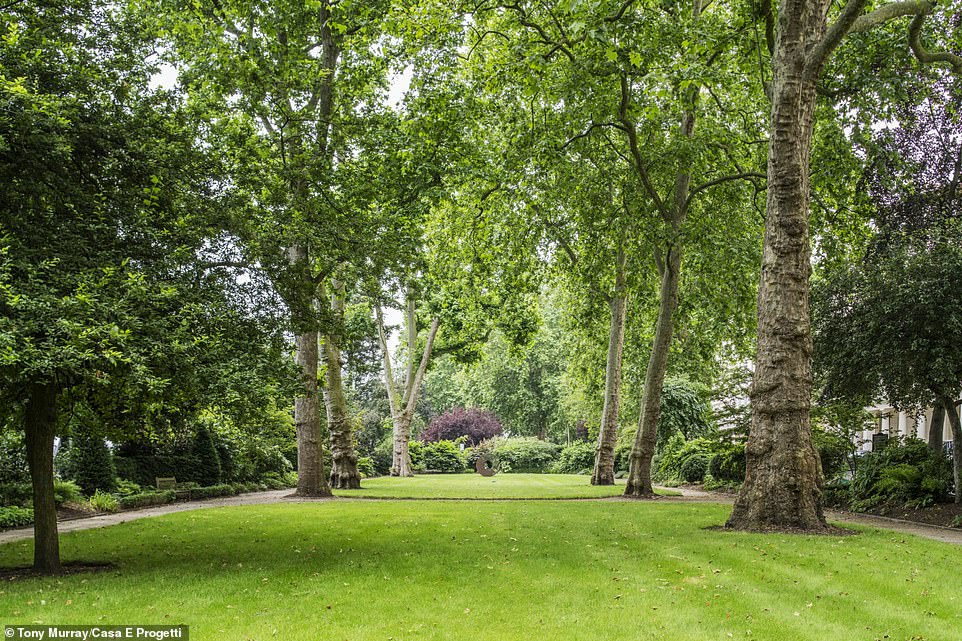 Quiet oasis: The property has access to the lush green gardens at the heart of the square (pictured) which offer an escape from the bustle of the city. There is also a separate patio garden off the back of the main residence

Built in the 1820s, Eaton Square, is largest private garden square and is encircled by a terrace of grand residences designed in classical style with projecting Doric colonnade and porches.

In 1913, Stanley Baldwin, then the MP for Bewdley, moved into No. 93 with his wife, Lucy, and their children.

It was in the dining room and adjoining living spaces that Baldwin entertained his cousin and close friend Rudyard Kipling, as well as high profile figures including Winston Churchill, Neville Chamberlain (who lived at No. 37) and the Prince of Wales, later Edward VIII.

The wealthy Americans bought the property as a city pied-a-terre, in addition to their British country house, Turville Grange, an 18th century manor house near Henley-on-Thames that Henry II had owned since the 1970s. 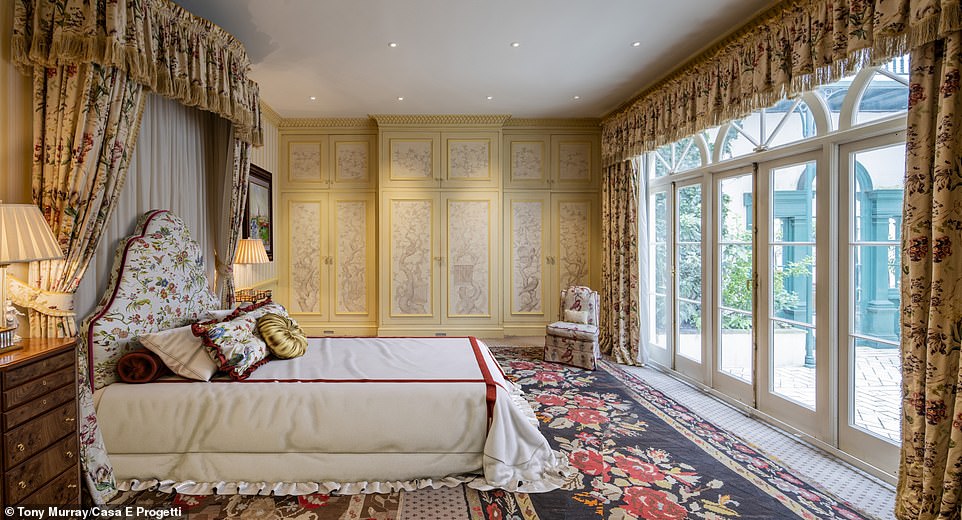 Ultimate luxury: The master bedroom, pictured, is traditionally decorated but could be renovated and transformed with a more modern treatment. The large room has space for a king-sized bed and opens directly out onto the patio garden 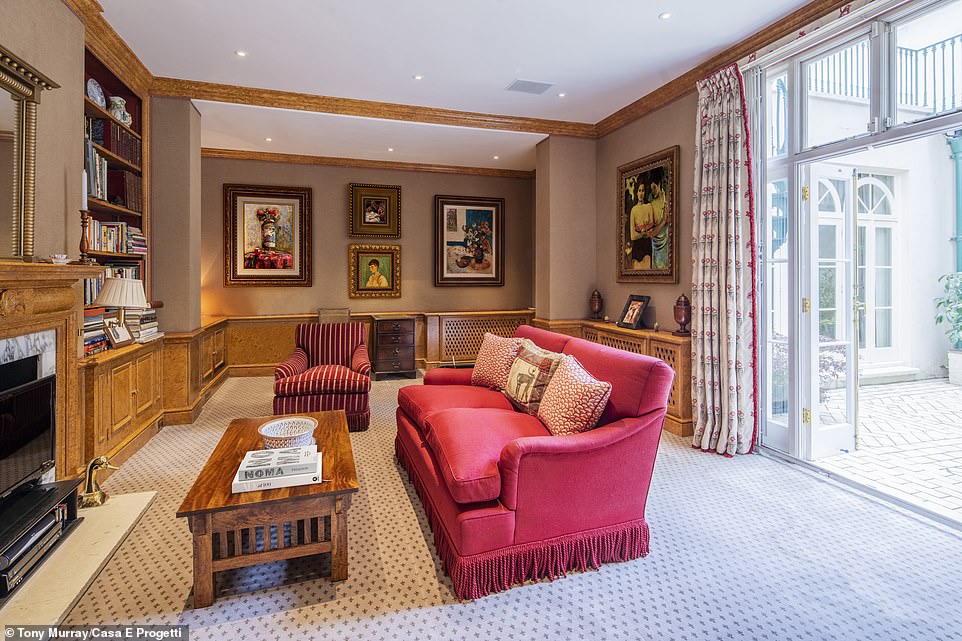 Cosy corner: The study, pictured, is part of the master bedroom suite of rooms and also opens out onto the garden patio. At the moment it is used as a private living room but there would be plenty of space to install a desk to work from home 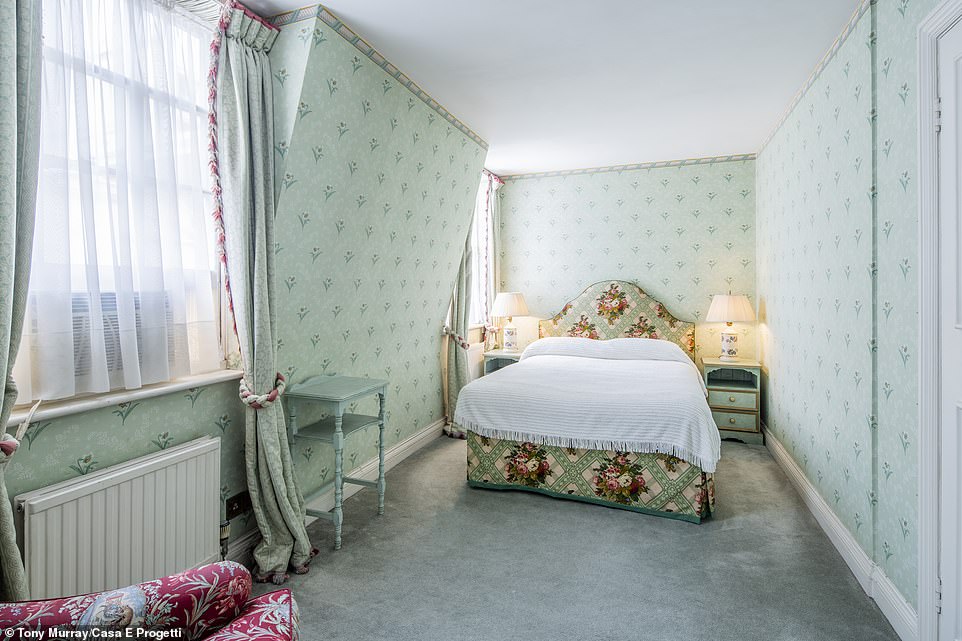 Extra accommodation: Attached to the primary residence is a second mews house with two bedrooms. This could be used to house staff, elderly family members or visitors. Above, one of the two bedrooms on offer in the mews house 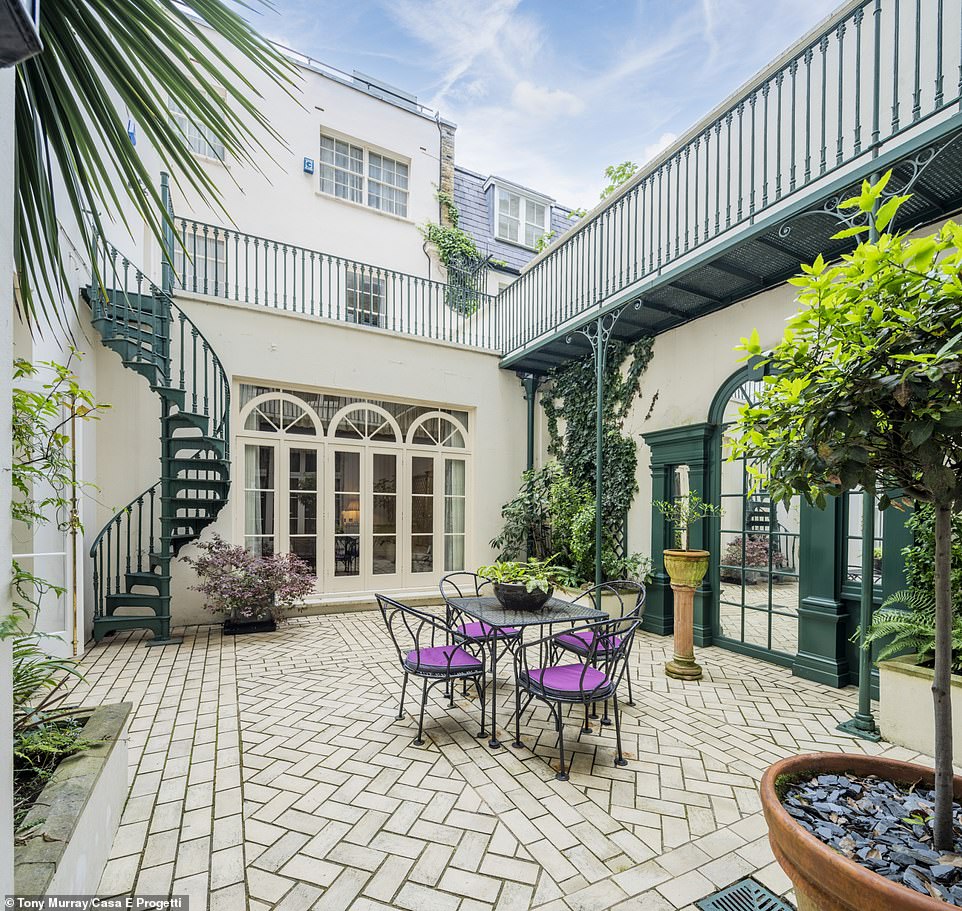 Tucked away: One of the highlights of the property is this large, split-level patio garden which would be ideal for summer parties. It has direct access to the master bedroom and largest guest bedroom in the main house

Kathleen DuRoss Ford, a former model, accomplished photographer and keen aesthete, transformed 93 Eaton Square into one of the most elegant and gracious homes in Belgravia, commissioning architect Jeffrey Smith and renowned design house Colefax & Fowler to refurbish and decorate the interiors in English country-house style.

Henry II died in 1987 whilst the refurbishment of the Eaton Square residence was taking place. Kathleen continued to spend six months of the year in Britain, entertaining the likes of Jackie Kennedy and Karl Lagerfeld, and spent the remainder of the time in Florida.

In 1990, Kathleen loaned the property to Margaret and Dennis Thatcher whilst they were in the process of buying a home for themselves after Mrs Thatcher left office. They settled in nearby Chester Square the following year.

Today the property retains some of the charm that first attracted the Baldwins, the Fords and the Thatchers, but is primed for a new lease of life. 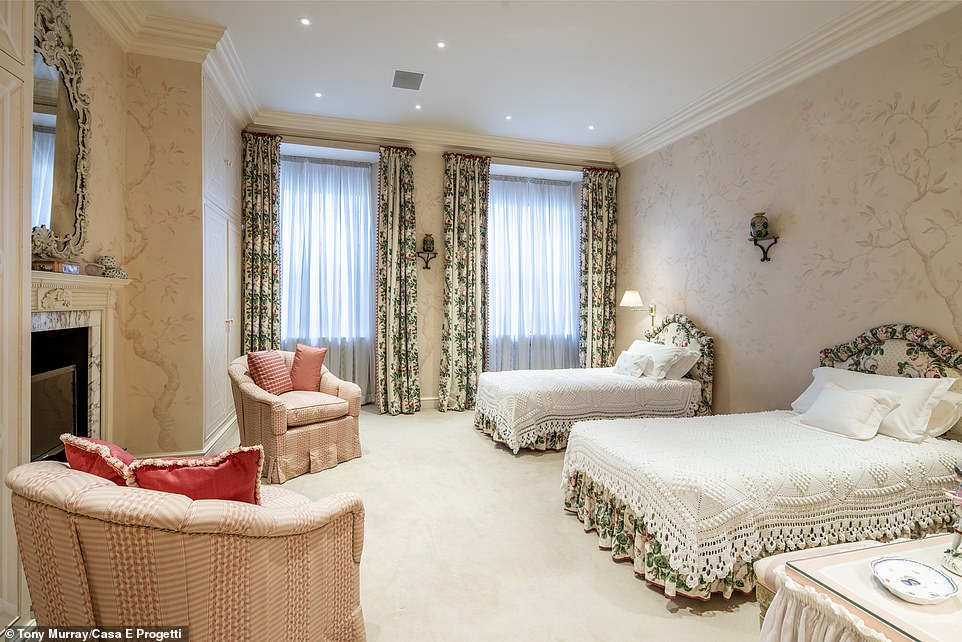 Quaint: One of the guest bedrooms in the main property has been set up as a twin room with two separate beds. As with all of the rooms in the home, there is plenty of scope for the next buyer to modernise and put their own stamp on the place 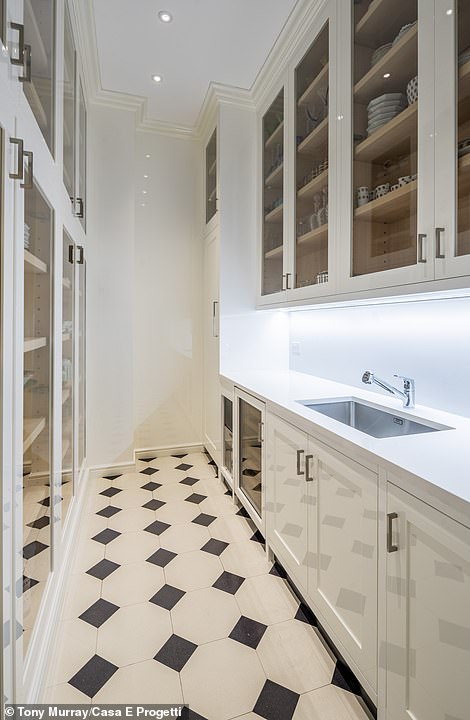 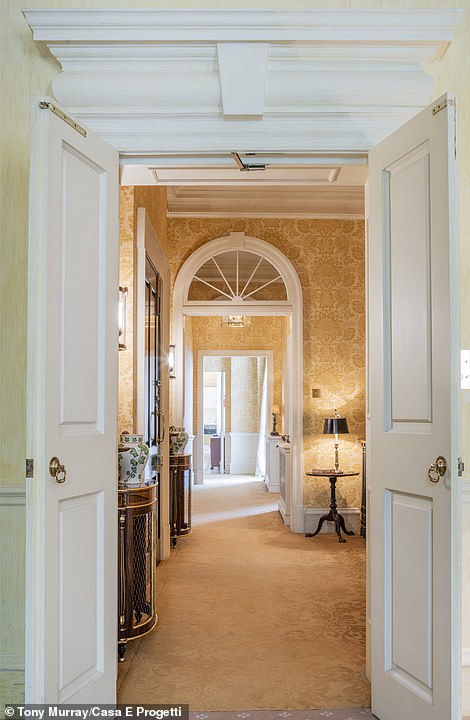 Self-contained: The mews property has this separate kitchen utility suite which can also provide extra storage (left). Right, a view through the primary residence gives an idea of its scale and size 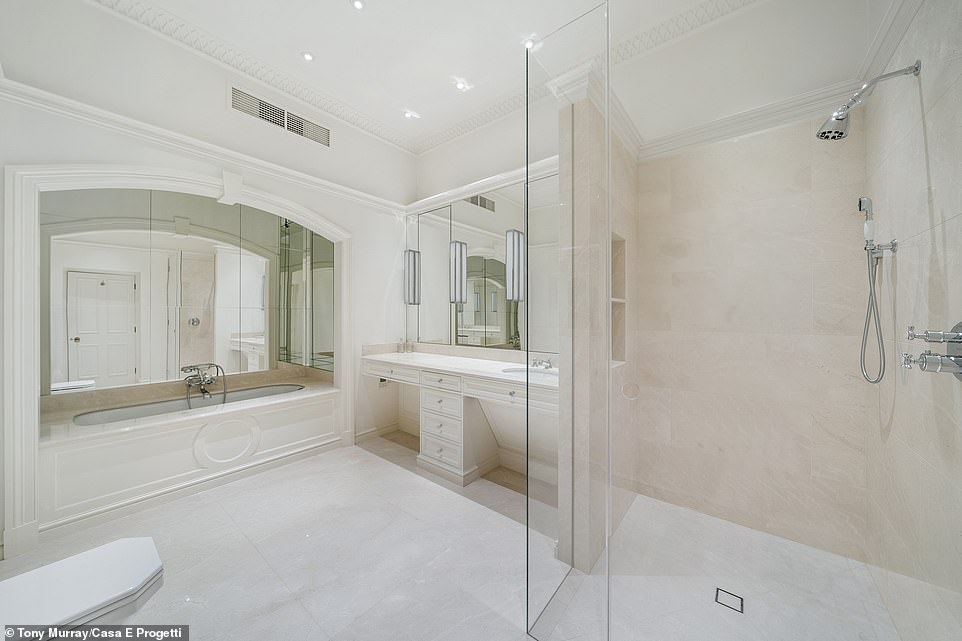 Swimming in room! The bathroom in the master bedroom suite has an enormous shower in addition to the bath, pictured. Although there is currently just one sink there is space to add a second for his-and-hers accommodation 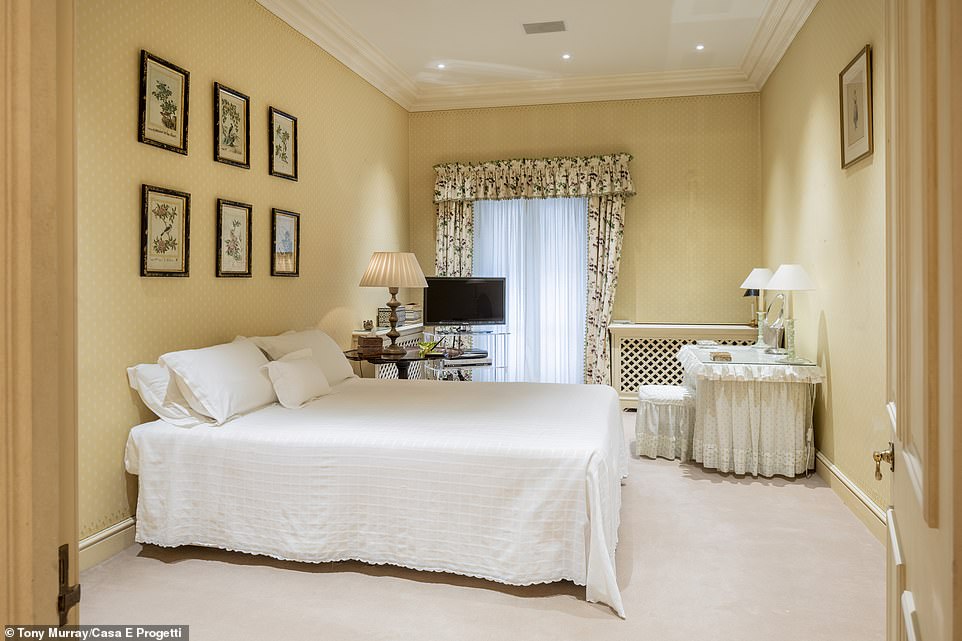 Making yourself at home: This guest bedroom in the main residence is a welcoming space for family and friends. As well as its own television and vanity table, the room also boasts a large window to give the space some natural light

Double doors lead to the formal dining room which is serviced by a large family kitchen with a central island, complete with a separate utility room.

The master bedroom suite boasts a bedroom, a study, bathroom and a walk-in wardrobe/dressing room. It also has direct access to a secluded patio garden.

There are three further bedroom suites, each with an en-suite bathroom, as well as two guest powder rooms. 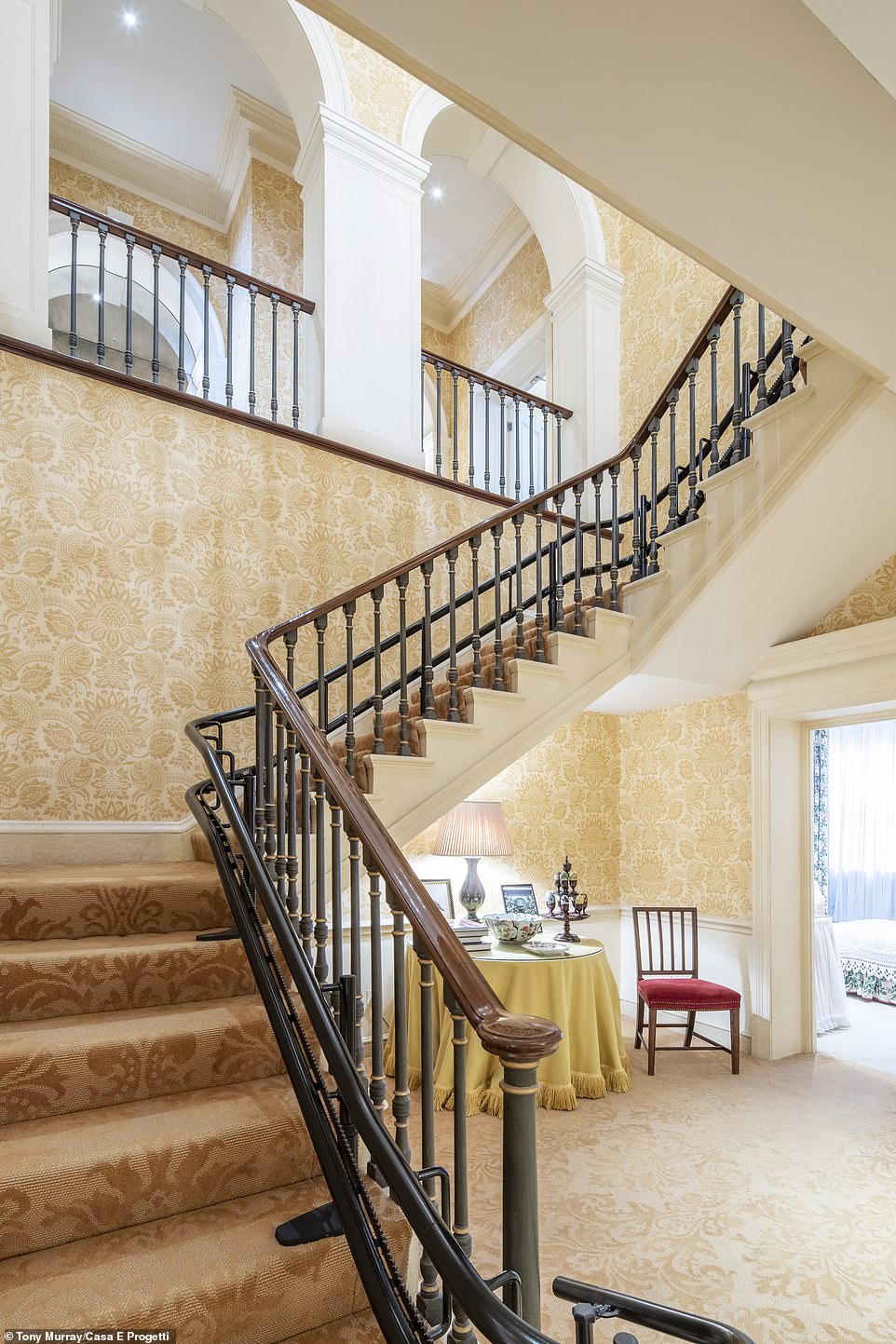 Making an entrance: The central staircase of the main entrance creates a sense of grandeur from the moment you walk in 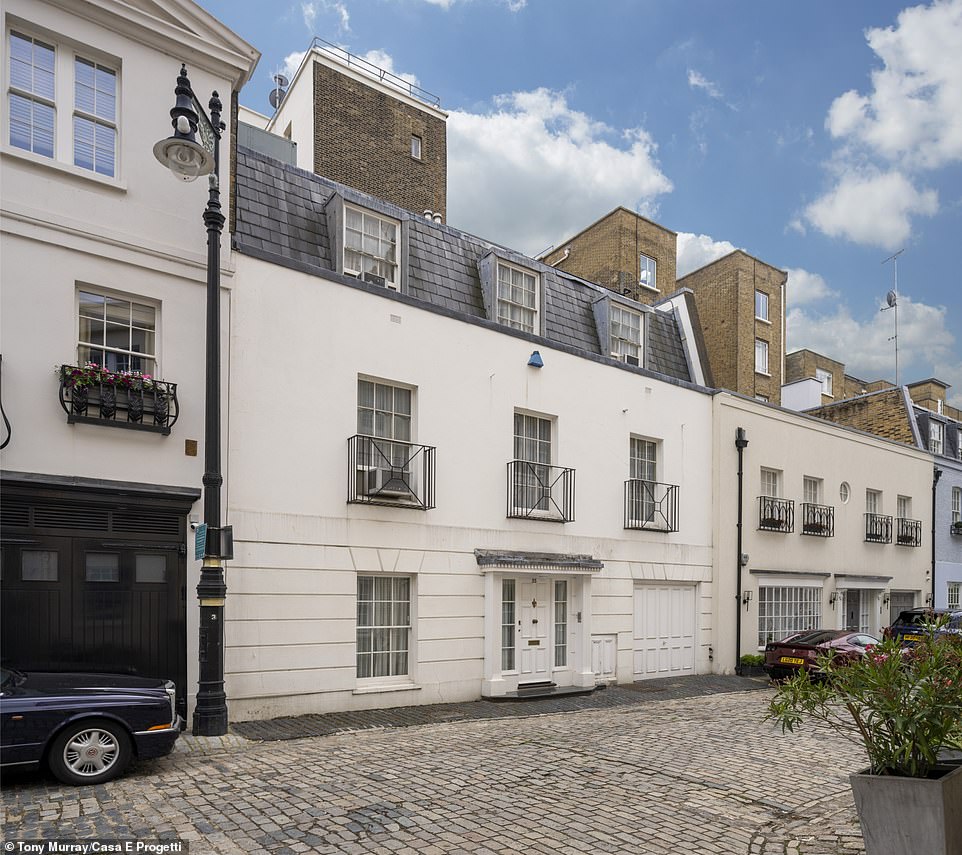 Discreet: The entrance to the two-bedroom mews house, which is connected to the primary residence and offers more space

The interconnecting mews house at 35 Eaton Mews North has a lower ground floor wine cellar, with accommodation over ground and two upper floors.

Sales agent Beauchamp Estates highlight that other houses in Eaton Mews North have a full lower ground floor, so planning could be sought to extend the mews house by circa 600 square foot and expand the existing cellar to create a lower ground floor linking to the lower floor in the main residence.

If remodelled, a new super prime residence could be created with VIP bedroom suites in the mews and two floors of reception rooms in the main residence, designed around the grand salon and patio garden. This extended and refurbished property could be worth up to £30million.

Gary Hersham, Founding Director of Beauchamp Estates says: ‘This Blue Plaque residence at 93 Eaton Square has been the Belgravia home of two legendary Prime Ministers, played a role in the 1936 Abdication Crisis, and been the London home of one of America’s most celebrated dynasties. If extended and remodelled, a new super prime residence could be created that could significantly uplift the current value of the property.’