Beyoncé brought the dazzle to Dubai.

The chart-topper, 41, may have been paid a reported $26 million for her hour-long performance at the star-studded opening of Atlantis The Royal hotel in Dubai Saturday night, but her bling cost a third of the price.

Bey changed into multiple outfits for her first on-stage appearance in years and glittered in a whopping $7.5 million worth of Lorraine Schwartz jewels.

Walking the red carpet in a sexy gold gown by Dolce & Gabbana, the “Single Ladies” singer made a statement in the plunging sequin outfit with sheer panels down the legs. 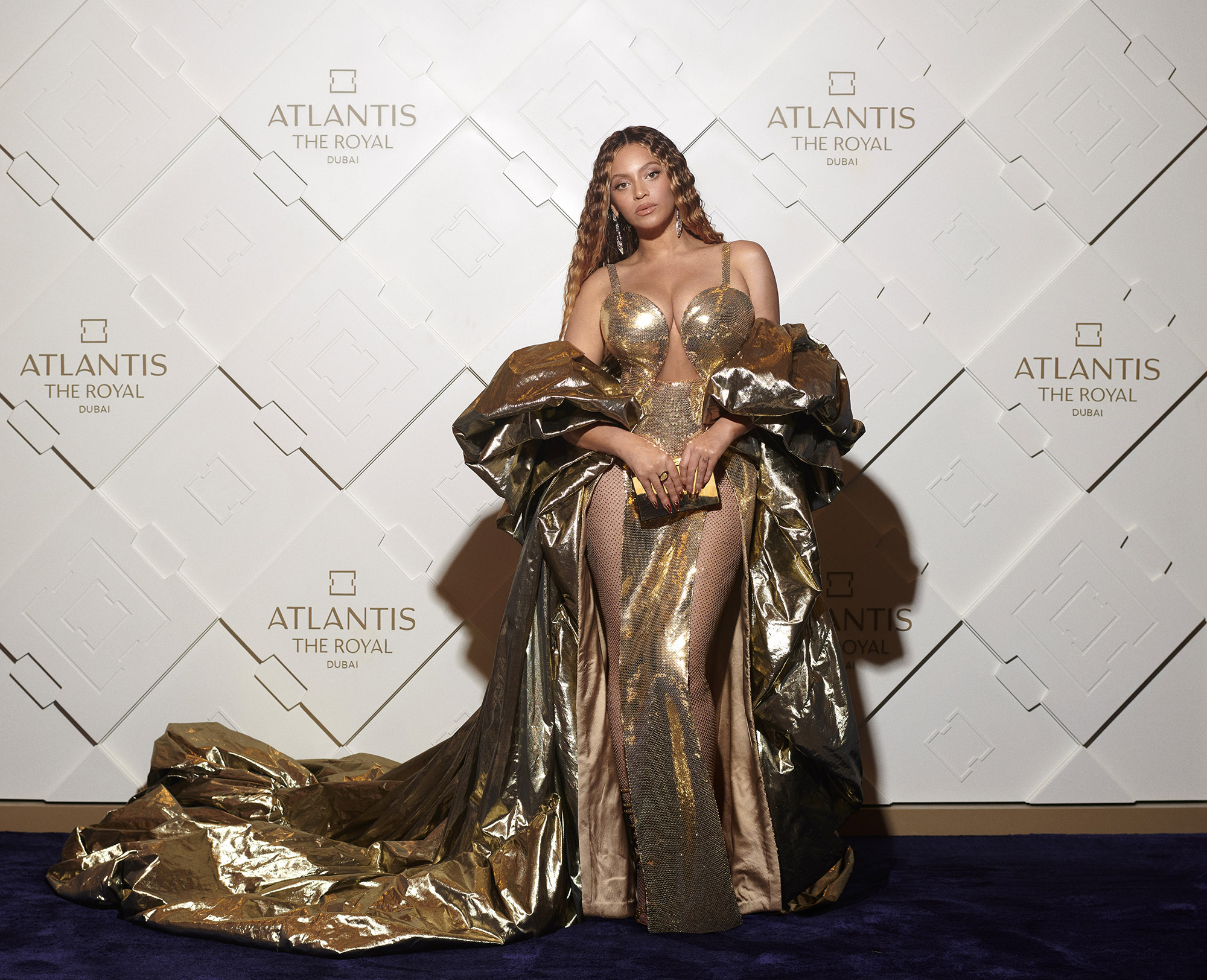 When it came time for the big show, the “Cuff It” singer wowed in a custom yellow creation by Dubai-based label Atelier Zuhara.

The sequin-and-feather-trimmed dress included a bra top with cut-outs at the stomach and a large, fan-shaped train of sorts extending behind her like angel wings. And 11-year old daughter Blue Ivy joined mom on stage in a red ensemble that matched the back-up dancers. 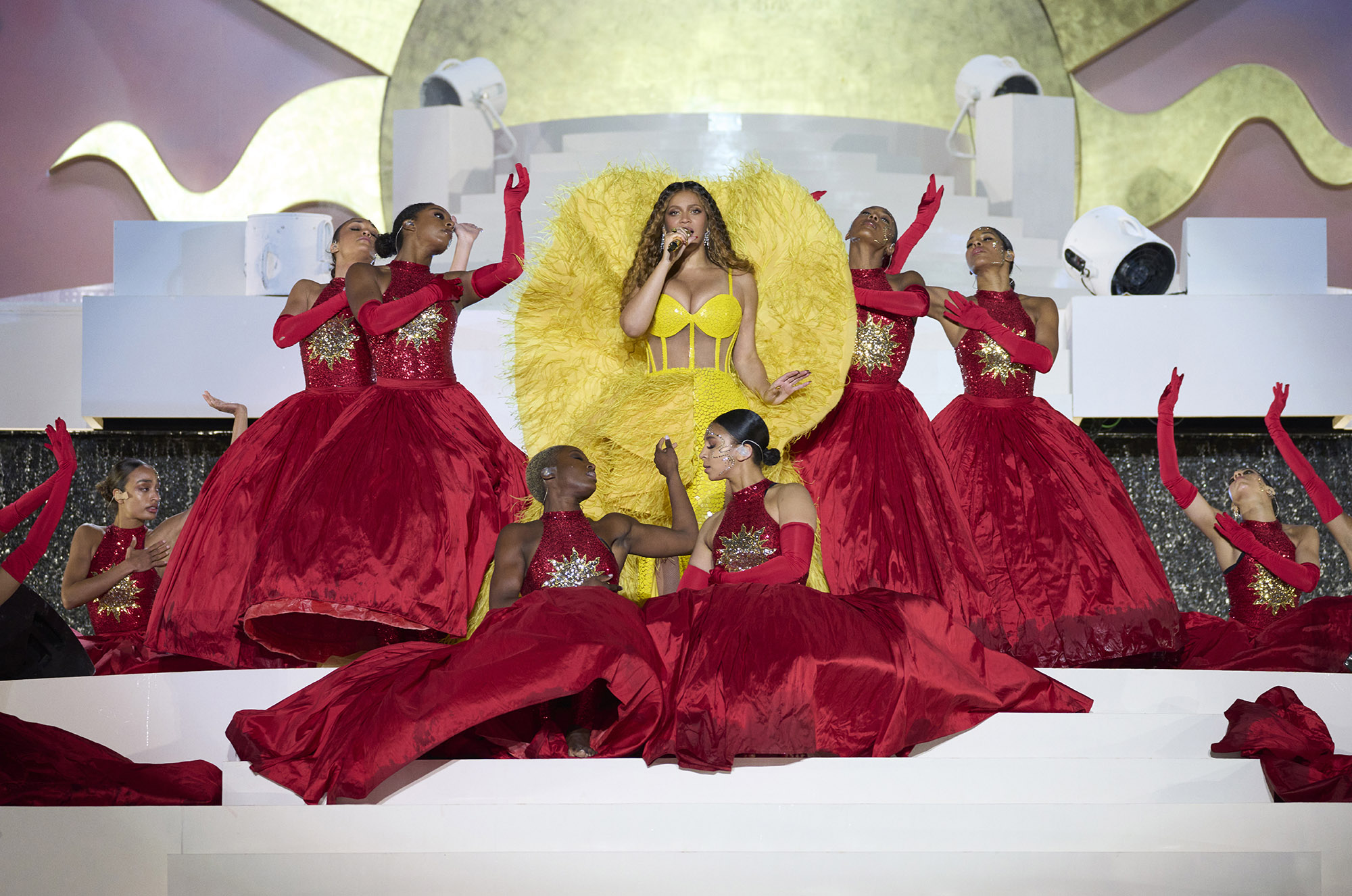 Beyoncé added plenty of glam with diamond and green Colombian emerald fan earrings that weigh in at more than 100 carats, pairing the sparkling gemstones with a 30-carat vivid yellow diamond ring.

Moving on, the “Break My Soul” singer changed into a bold red-and-gold look by celeb fave Nicolas Jebran featuring a bustier catsuit with another dramatic train. 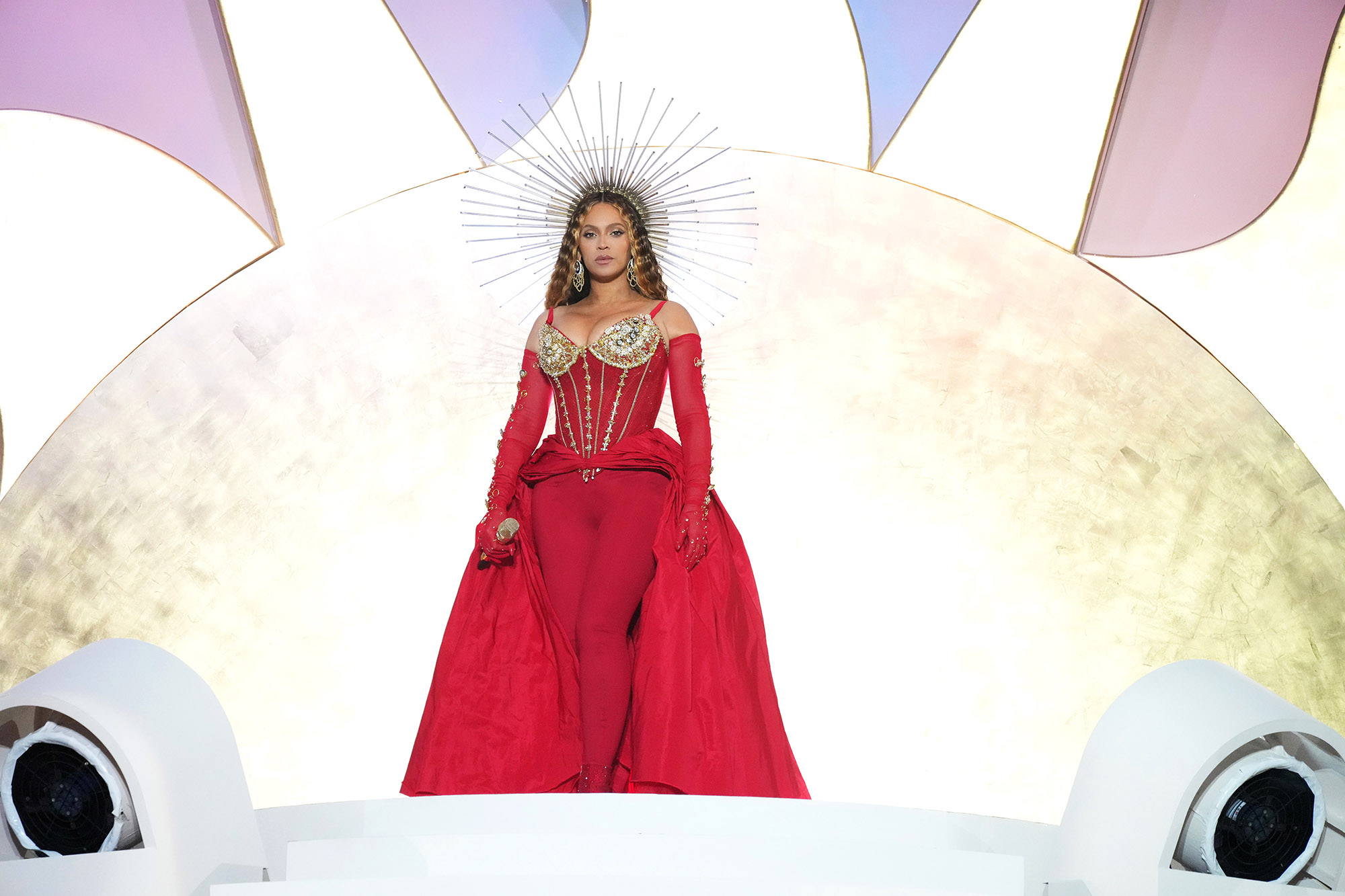 The “Halo” singer sported what else but a halo-style crown in terms of accessories, adding red gloves and bringing more bling from Schwartz in the form of dangling 80-carat diamond earrings.

For her final look of the concert, Bey sported a sassy pink crystal-covered mini by Ukrainian designer Ivan Frolov, adding matching stockings and gloves along with pyramid earrings featuring more than 60 carats of diamonds. 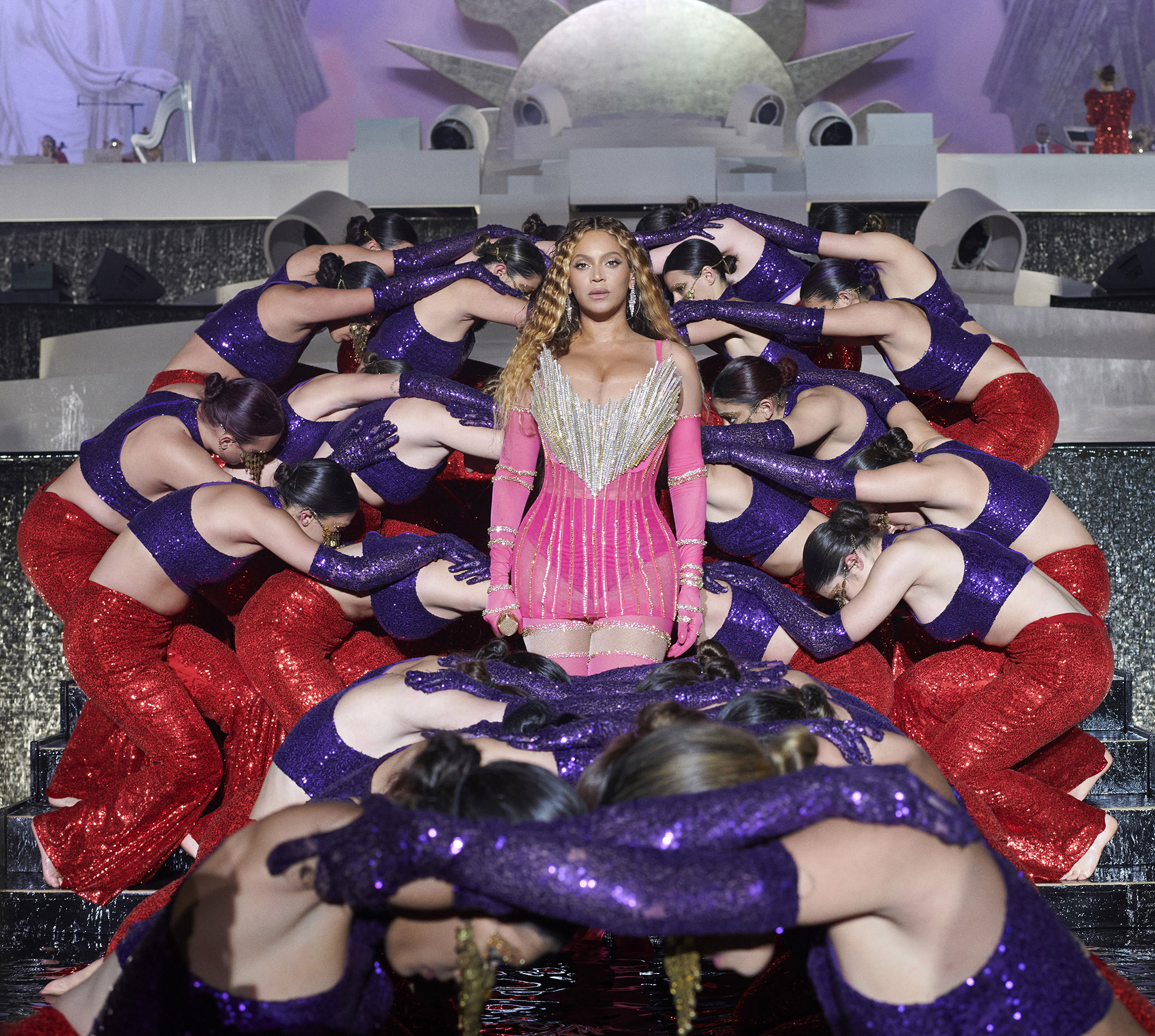 The designer told Vogue “the outfit was created in our workshop in Kyiv, Ukraine, during war and massive blackouts” and that “it just goes to show that no matter what, Ukrainian brands continue to showcase the world their resistance and culture.”

Beyoncé’s stylist, KJ Moody, posted an emotional caption along with a series of photos on Instagram to commemorate the night, writing, “Wow! This was my first Live performance, Styled by me! What a moment!! I have watched this woman tear down the house since I was 5 years old. Going to destiny’s child concerts, screaming and dreaming of one day being apart of a moment like this.” 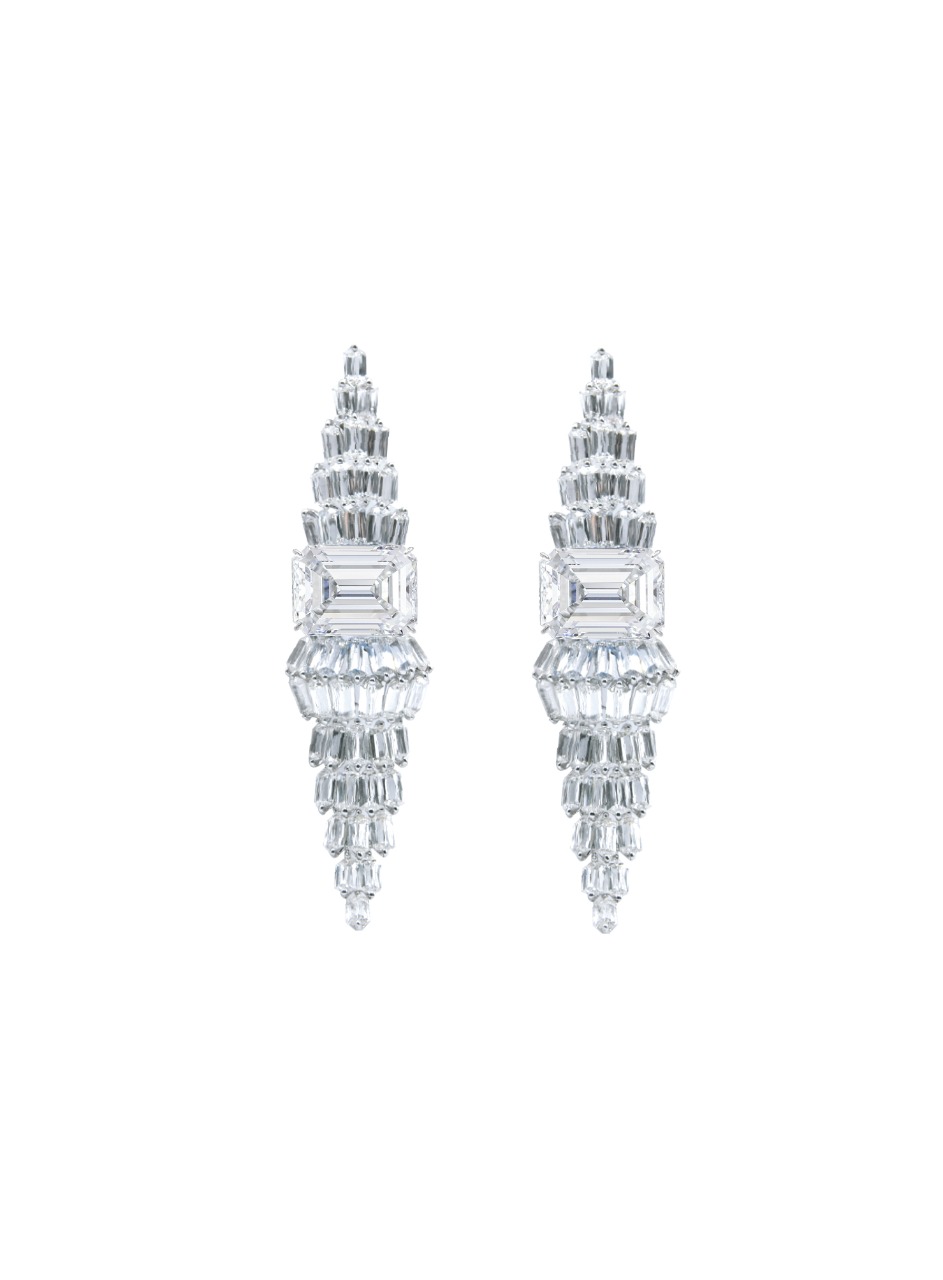