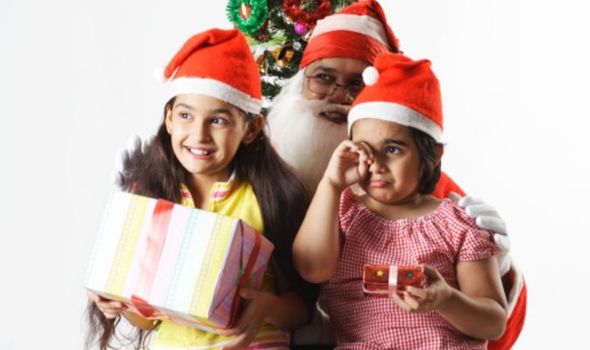 Other cringeworthy events include – youngsters telling a relative they don’t like their present, asking them how much it cost, or opening the wrong gift. The poll, of 2,000 parents, revealed 15 percent of youngsters told someone what their gift was before they had opened it and 12 percent cheekily ate all the chocolates from the Christmas tree.

A fifth of parents have embarrassing photos as a result of a trip to Santa’s grotto – with 38 percent of kids pulling off Santa’s beard and 35 percent running away.

And nearly one in five parents (18 percent) have been left mortified after their child wept during a visit to see Santa.

These moments have left 25 percent of mums and dads feeling apologetic, with 22 percent even saying sorry to Santa for something their child said or did while visiting a grotto.

Another 18 percent have been left cringing, but 38 percent admitted they saw the funny side.

The study was commissioned by Virgin Media, to celebrate the launch of its free virtual Santa’s Grotto experience, which is open for applications from today.

A spokesperson said: “Every parent will experience a cringeworthy moment due to their youngsters at some point and it seems Christmas is the season for it to happen.

“Kids say what they think and while sometimes that leaves mums and dads feeling embarrassed, it can also create some hilarious family memories.

“Visiting Santa at a grotto is always going to be a memorable experience for families, even more so if their children’s antics result in a Christmas calamity, with kids asking Santa cheeky questions or even pulling his beard off.

“With Christmas set to be very different this year, we want to make sure families don’t miss out on the opportunity to meet Santa and we want to help them enjoy the magic of Christmas with our free, virtual Grotto -complete with real life reindeer.”

The study also revealed the funniest and most unusual things children have asked Santa for, including a pony (13 percent), a new brother or sister (12 percent) and for it to be Christmas every day (10 percent).

Youngsters are also keen to put Santa on the spot, with 11 percent asking how he will visit their house if they don’t have a chimney.

Other awkward questions parents have faced from their offspring this year include ‘will Santa be allowed in our house because of social distancing?’ (19 percent), ‘how is he going to travel due to restrictions?’ (16 percent) and ‘shall we leave hand sanitiser out?’ (12 percent).

But in order to make the festive season as ‘normal’ as possible, 48 percent of those polled via OnePoll, will leave treats out on Christmas Eve.

And 26 percent plan to have video calls with relatives who would usually be with them on the day.

Virgin Media’s spokesperson added: “We’ve set Santa up with everything he needs to connect with families across the nation directly from the North Pole, so he can still spread Christmas cheer to children – even if he can’t do it in person.

“We’ve worked with our friends at the charity, Scope, to make the sessions with Santa as accessible as possible, and have dedicated slots for disabled families and those who are shielding.

“Plus, to make the experience even more magical, every child that speaks to Santa will receive an early Christmas gift; their own Rudolph soft toy which they can cuddle as they count down the number of sleeps until the big day.”

The ballot for Virgin Media’s virtual Santa’s Grotto is open from 20-23 November via this website with slots available for Virgin Media customers, as well as disabled families and those who are shielding.

Top 20 ways kids have embarrassed their parents at Christmas

1. Cried when they saw Santa at a grotto

2. Told someone who gave them a present that they didn’t like it

3. Told someone what their Christmas gift was before they’d opened it

4. Eaten all the chocolates off a Christmas tree

5. Asked someone how much money they spent on their Christmas gift

6. Found Christmas gifts in the house which were meant to be from Santa

8. Unwrapped the presents under a Christmas tree which weren’t meant for them

11. Refused to sit at the table for Christmas dinner

12. Told someone who gave them a present that it was the wrong one

13. Pulled Santa’s beard off at a grotto

14. Told Santa at a grotto that they didn’t think he was the ‘real’ Santa

15. Knocked over a Christmas tree

16. Told an elderly relative they smelt

17. Woke the household up extremely early when staying at someone else’s house

18. Told Santa at a grotto that they didn’t like the gift he gave them

19. Refused to change out of their pyjamas for Christmas dinner

20. Asked Santa at a grotto how old he is