A man whose viewing experience at the cinema was disrupted by a crying baby has called for movie theatres to ban parents from bringing their young children to screenings of blockbusters.

Taking to Reddit, the unnamed US man explained that he was sitting just a few seats away from a couple who came to watch the new Spider-Man film at the cinema with their baby.

He said the child was constantly making noise throughout the film and the mother of the baby only left the screening once, after the infant had been ‘shrieking for five straight minutes’.

The man’s suggestion that cinemas should ban babies was surprisingly popular with parents agreeing that it’s inappropriate to bring young children, however others argued teenagers can be just as disruptive when watching a film. 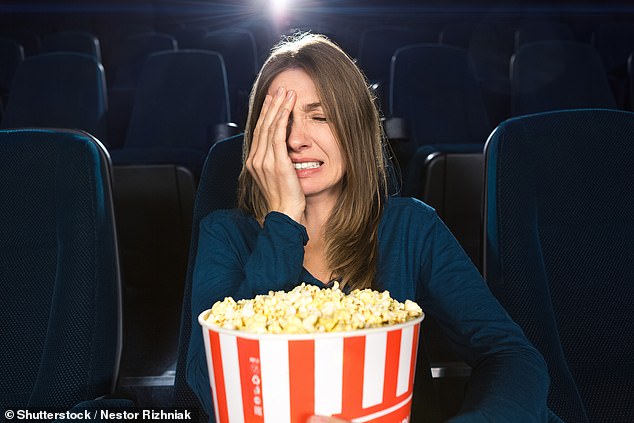 In the UK, many cinemas offer film screenings with soft lighting, lower volume and free movement around the auditorium at specific times for parents to bring their children to a screening.

However the movies shown are usually not rated above U or PG, with 12A films such as Spider-Man: No Way Home only available as general screening.

The man argued parents shouldn’t come to the cinema if they are unable to find a babysitter to look after their child.

Venting his frustrations, he wrote: ‘Just got back from seeing the new Spider-Man movie (no spoilers but it was pretty good) and maybe six seats to my left was a mother and father who had come with their baby.

‘Throughout every emotional and major scene in the movie the baby was crying or screaming and frankly made the movie significantly less enjoyable. The mother took the baby out only once after it had been shrieking for five  straight minutes, despite it constantly making noise for about 1/3 of the movie, and once she came back it started to work itself up again.

‘I don’t understand why you can’t get a baby sitter for your baby for the three hours you’re going to be at the movies, but instead have to bring the baby to the theaters and actively make everyone’s viewing experience worse. I

The majority of responses to the post agreed parents shouldn’t bring their baby to the cinema.

One person wrote: ‘Why would parents want their child to be in a dark movie theatre where there is loud talking, yelling, fighting and god knows what else coming off the screen? Any baby would be terrified.

‘Not only is it not cool for the baby, it’s just downright rude and ‘we don’t give a s*** about anyone but us) kind of vibe. Those parents should go to the cinema during those mom and tot movie times… which they probably don’t want to go to because they can’t hear anything. I’m surprised someone didn’t ask them to leave.’

Another said: ‘Some people probably highly disagree but as a mother of three, I highly agree. Young children with no patience should NOT be in a movie theatre. Especially with how much it costs people.

‘People want to go see their movies in peace and not have to worry about screaming baby’s/kids.’

One person defended parents bringing their children, writing: ‘It’s more tolerable if it’s a children’s film, but even then if the kid keeps on screaming and crying, parents should take kid out until it calms down.’

‘Honestly. I’ll take the baby over the teenagers. Baby can’t help it. Parent are the a******. Not the baby. The teenagers though? They know how to f****** behave. My friends and I would frequently do movie nights. Sure we were rowdy outside of the theatre and s*** like that, but we watched our movies and cleaned up after ourselves,’ another wrote.