Readers are warned the audio with this story contains graphic language

A Victorian opposition video call descended into chaos – and a whole lot of swearing – after some members furiously rejected a shadow minister’s promise that the Coalition would not alter the Andrews government’s law banning gay conversion therapy. 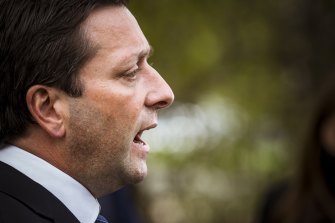 Coalition MPs complained during Tuesday’s joint party room meeting that the decision not to amend the law was made unilaterally by newly appointed equality spokesman James Newbury and Opposition Leader Matthew Guy without the approval of shadow cabinet.

In an interview with The Age and The Sydney Morning Herald last month, Mr Newbury gave an “iron-clad guarantee” the party would not pursue any changes to the controversial law, prompting fury from his colleagues.

The depth of their anger can be heard in a recording of the Zoom meeting obtained by The Age and the Herald.

“From a Nationals point of view, we will not be supporting James on this position and he can go and get f—ed, simple as that,” Nationals leader Peter Walsh told Tuesday’s meeting.

“[If] a shadow minister changes [and] they can put their own personal views on a policy irrespective of what’s been through the processes of our two parties, [then] I think we’ve totally lost our way.

“Just because James has been appointed the shadow [minister], doesn’t give him the right to change history and put a very definite view that is counter to what’s been agreed to by our party processes.”

The Coalition supports the prohibition on gay conversion therapy but shared the concerns of the Australian Medical Association and some faith, psychiatrist, legal and parental groups that the legislation went beyond simply banning harmful practices and that sanctions were too severe.

Under former leader Michael O’Brien, the opposition promised many of these groups that if it won next year’s election it would move amendments to the bill to give parents the right to speak with their children about gender and sexuality issues and protect the work of psychiatrists engaged in evidence-based practice to support the mental health of gay and gender-diverse people.

However, after The Age reported the Coalition’s promise to introduce those amendments, Mr Newbury said they would not look to make any changes to the law.

At one point in Tuesday’s heated meeting, hard-right Liberal backbencher Bernie Finn said the opposition should not shift from its commitment to community groups to amend the laws. “What do we say to them?” he said.

Mr Finn: “We gave a commitment; you might not care about commitments but a lot of us do.” 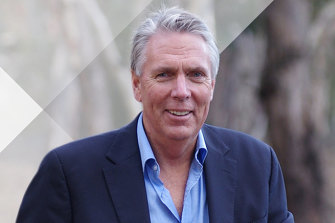 According to two MPs on the Zoom call, Mr O’Brien asked Mr Guy whether the opposition was still committed to the principles of the amendments.

Mr Guy replied that the opposition still supported the amendments, but a spokesman for the Opposition Leader said on Wednesday that “while Matthew Guy leads the Liberal Party the gay conversion law will not be amended”.

One Coalition MP described Tuesday’s meeting as a “shambolically executed episode of Seinfeld”.

“Newbury’s iron-clad guarantees can best be equated with a soggy scotch finger biscuit out of the Brighton cafe,” they said.

“The bigger issue at play is a month or so in [to his leadership], there’s trouble in Matthew Guy’s paradise: he canned the WhatsApp group for MPs, canned the question time meetings, and now he’s got a newly appointed shadow minister freestyling without authority.”

The opposition’s policy shift on gay conversion has not as yet been communicated to any stakeholders. Australian Medical Association Victorian branch president Roderick McRae said he had not had a conversation with the opposition on the topic since Mr Guy became leader.

“We would expect there’s no change and they would hold to the undertaking,” he said. “If they were going to change it, we’re open to the conversation.”

Mr Guy led the Coalition to defeat at the 2018 state election after it spent years promising a tougher approach on youth crime and campaigning against sexuality and gender programs in schools. Since returning to the leadership, with crucial support from Mr Smith and Mr Newbury, he has veered away from focusing on social issues and has narrowed his agenda to the economic and social impact of public health restrictions.

One MP said Mr Newbury’s decision to guarantee no amendments to the gay conversion bill was done with the imprimatur of Mr Guy, who was keen to avoid the perception that the opposition was uncomfortable with the government’s socially progressive agenda.

“Matthew was spooked by the African gangs stuff from last time and he’s trying to remake himself and make people forget the old agenda … He sent out Newbury to throw out the old decision,” the MP said.