By almost any measure, Australia has had a good recovery from the pandemic recession.

The latest national accounts, showing a 1.8 per cent increase in GDP through the March quarter, confirmed that compared to just about every other advanced economy, Australia is leading the pack. 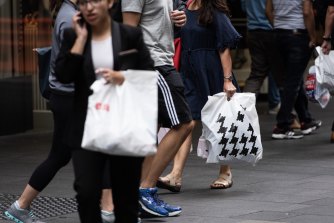 The nation’s consumers have propelled the strong economic rebound.Credit:James Brickwood

That 1.8 per cent, on top of a 3.5 per cent jump in the September quarter and a 3.2 per cent burst in the December quarter, has dragged Australia’s economic output beyond where it was going into the pandemic.

It’s a wonder what the combination of the lowest interest rates on record, about $300 billion in federal handouts (plus plenty from the states and territories) and a ban on Australians leaving the country will do for the local economy.

That combination has been parlayed by the nation’s consumers into the strong economic rebound.

Household consumption has grown a remarkable 14 per cent or almost $33 billion over the past nine months. It took 6 years for consumption to grow that much ahead of the pandemic.

Direct spending by consumers accounted for more than a third of the March quarter result. That doesn’t include their spending on new homes or the huge spike in house prices.

It accounted for almost 80 per cent of the December quarter result and the economy would have contracted in the September quarter if not for the extraordinary shopping habits of Australians.

The federal government is trying to argue the recovery is being led by private businesses. It’s clearly not. This climb out of the pandemic recession hole has been led by consumers with no one in second place.

Yet despite this momentous effort, consumers are still not spending like they used to.

Actual consumption is still lower than it was in the September quarter of 2018. We’ve had two Richmond premierships and two Donald Trump impeachments since then.

Consumers in NSW and Victoria are still spending like it was mid-2017. Only shoppers in Queensland and the ACT are spending at record levels.

The question is whether consumers can get back to where they were before anyone had ever heard of coronavirus.

The economic outlook depends on consumers dipping into their savings. The household savings ratio spiked to a record 22 per cent in the June quarter of last year. Since then it has unwound but the March quarter showed only a 0.6 percentage point drop to 11.6 per cent.

That’s a lot of cash waiting to be tapped. It’s what the economy needs to be tapped if it is to grow strongly over the next couple of years.

But we’ve seen this movie before.

In the immediate wake of the global financial crisis, the household savings rate spiked to 10.9 per cent in the December quarter of 2008.

It dropped a little as the threat of recession receded but then remained steady until early 2016 before starting to edge down again. But even before the pandemic, it was back climbing.

In other words, consumers may not be so keen to run down their savings as much as Treasury, the Reserve Bank and businesses hope.

The potential for another lockdown, or the extension of one like that announced for Victoria today, is a pretty good reason for households not to dip into their savings. In fact, it’s completely rational to hold back.

That rational approach will continue until the country is completely vaccinated, where the virus is at bay and consumers don’t live in fear of hour-long press conferences from their premiers and chief health officers.

That means, as it always has, that the economic recovery is beholden to how our national and state leaders deal with the health response. And on that front, there is still much to do.