Perhaps the most impressive aspect of Michael Armitage as both an artist and a person is his immunity to cynicism. This is no mean feat in a world dominated by political immorality and self-interest in which voters seem to have lost the ability to tell right from wrong. Among artists, the vogue is to produce high-priced trophies that create social cachet for billionaires, or stirring statements that win the admiration of politically correct curators.

Armitage, whose exhibition The Promised Land has opened at the Museum of Contemporary Art, may well be on the billionaire shopping list nowadays, as he shows with one of the leading global galleries. He is also a devotee of politics and current affairs, whose work deals with pressing issues. 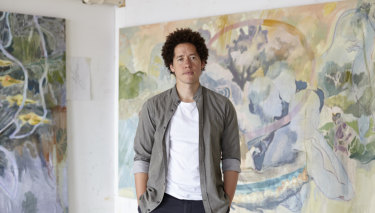 Michael Armitage in front of his painting Lacuna.Credit:George Darrell/White Cube

Yet Armitage's booming popularity is not because he has conformed to the templates of professional success. On the contrary, he offers a way out of the labyrinth, a fresh-minded approach that draws freely on art history and a troubled world to create paintings of great originality.

Born in Nairobi in 1984 to an English father and a Kenyan mother, Armitage has divided his life between Kenya and Great Britain. While he attended boarding school in England and furthered his studies at the Slade School of Art and the Royal Academy, his subject matter has remained fixated on Africa. It's not simply that his birthplace has a vitality missing from life in Britain, it's a question of where he feels most at home.

During his years at art school Armitage became disenchanted by the comments his work received from tutors whose knowledge of Africa began and ended with a cursory reading of Heart of Darkness. To those whose careers peaked in the 1990s art was another way of saying: "Up yours!" while cashing in on the eagerness of wealthy collectors and museums to embrace anything that seemed challenging and subversive.

Armitage could never identify with that mentality. Even as a student he was a fervent admirer of great painters such as Goya, Gauguin and Manet, who have remained touchstones for his work. Like De Kooning, he felt painting was nothing less than "a way of living" that allowed one to become more vitally engaged with the world in all its glory and tragedy.

His breakthrough moment came with the discovery of Lugubo, a bark cloth from Uganda he uses in place of canvas. In opposition to the smooth primed surfaces most artists prefer, Lugubo is full of lumps and holes. It doesn't permit the use of thick paint, requiring the application of thinned-down layers.

Regardless of his own political opinions Armitage is determined to avoid blunt, propagandistic statements.

Armitage has turned all the disadvantages of the medium into creative opportunities. In Anthill (2017), a painting about demonic possession, the craters and depressions in the cloth suggested a great brown anthill. The victim is found in the left-hand corner, while three witches riding hyenas cavort in the sky at top right. The anthill looms large in the centre of the composition – a blunt, irrational intrusion that adds to the feeling of menace.

Lugubo also played a vital role in the large painting, The Fourth Estate (2017), inspired by the artist's attendance at a political rally during the Kenyan elections of 2017. He found the experience utterly surreal, with supporters dressed as clowns and superheroes holding up the most diverse banners. In the painting he's substituted the image of a toad for the favoured politicians. A large hole in the bark cloth determined the placement of a tree in which figures sit like storks in a nest.

Regardless of his own political opinions Armitage is determined to avoid blunt, propagandistic statements. Kampala Suburb (2014), for instance, was inspired by draconian laws against homosexuality that threatened the lives of LGBT people, and even penalised those who failed to act as informers. The picture shows two men embracing in silhouette, but the figures and a painted frieze in the background were inspired by Egyptian temple art.

Armitage would be hard pushed to explain the Egyptian reference as so many of his devices arise spontaneously, with no logical connection to the subject of a painting. He goes with his hunches, preferring chaos to conceptual clarity. His images, imbued with undercurrents of sex and violence, may be unsettling but they are also compelling.

The creative tension in the work owes a great deal to Armitage's condition as an artist caught between two worlds: England, clinging to distant echoes of empire, and Kenya, a nation still grappling with the legacies of colonialism.