On your mark, get set, go! Crown Princess Mary of Denmark dons a baseball cap and trainers as she takes part in 5km Royal Run in Aalborg

Crown Princess Mary of Denmark showed off her sporting prowess today as she jogged 5km during the Royal Run in Aalborg.

The 49-year-old future queen of Denmark was dressed in an all-blue outfit, topped off with a grey baseball hat, as she took to the streets to jog with thousands of her fellow Danes.

The event, which was planned for May, had to be postponed until this month due to the Covid pandemic. 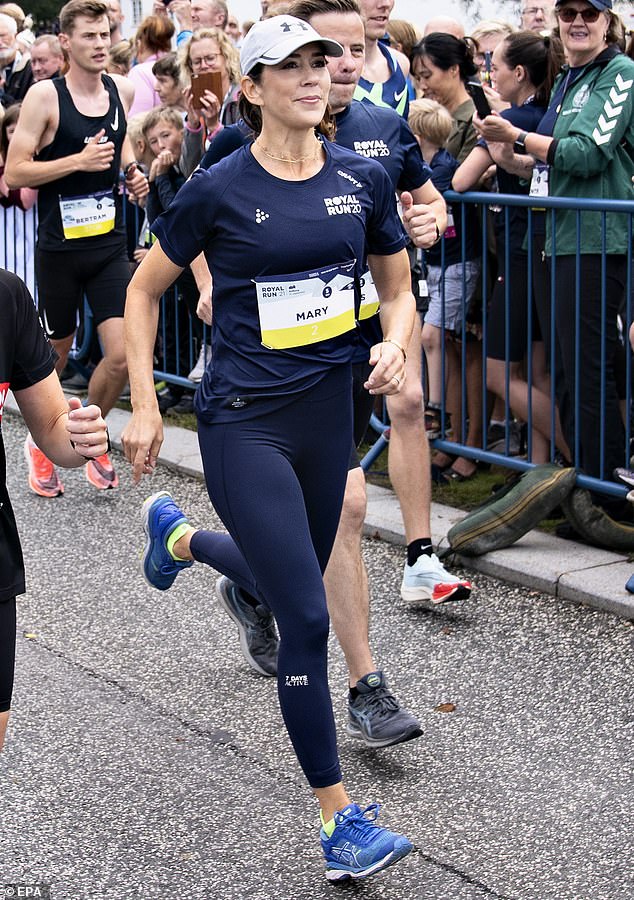 Crown Princess Mary of Denmark, 49, showed off her sporting prowess today as she jogged 5km during the Royal Run in Aalborg 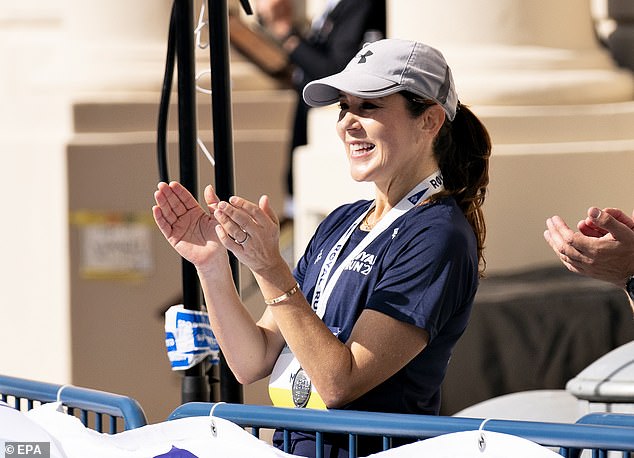 Proudly wearing her finisher’s medal, the royal encouraged and applauded other runners taking part in the event

Princess Mary, casually decked-out in athletic gear including a grey baseball cap, high fived members of the public, some of whom can be seen taking snaps of the royal

The race, which initially started in 2018 to celebrate her husband – and the future King of Denmark – Crown Prince Frederik’s 50th birthday, has now become an annual event.

It was announced in advance that Crown Princess Mary would run the 5km race in Aalborg, and Prince Frederik would run one distance in Odense and two in Copenhagen. 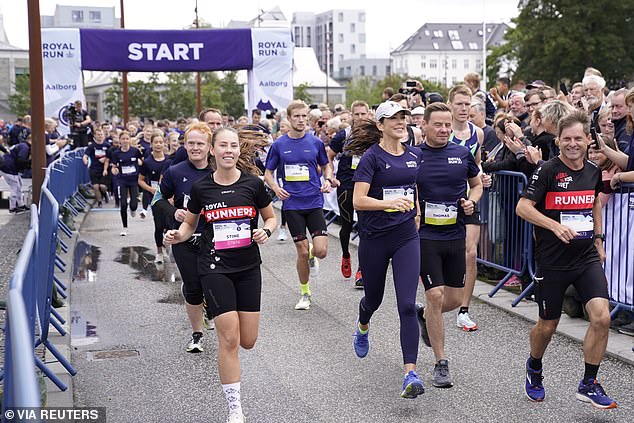 The royal bounded along enthusiastically, alongside thousands of members of the public, at the event today 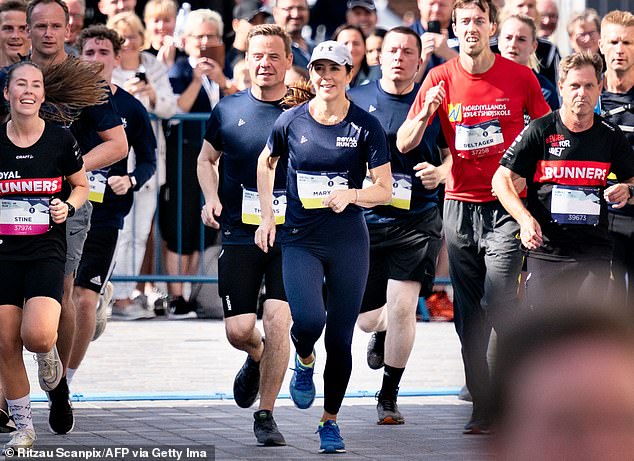 Princess Mary seemed to be enjoying the run and the weather, as she smiled while jogging in the sunlight, in a short-sleeved t-shirt 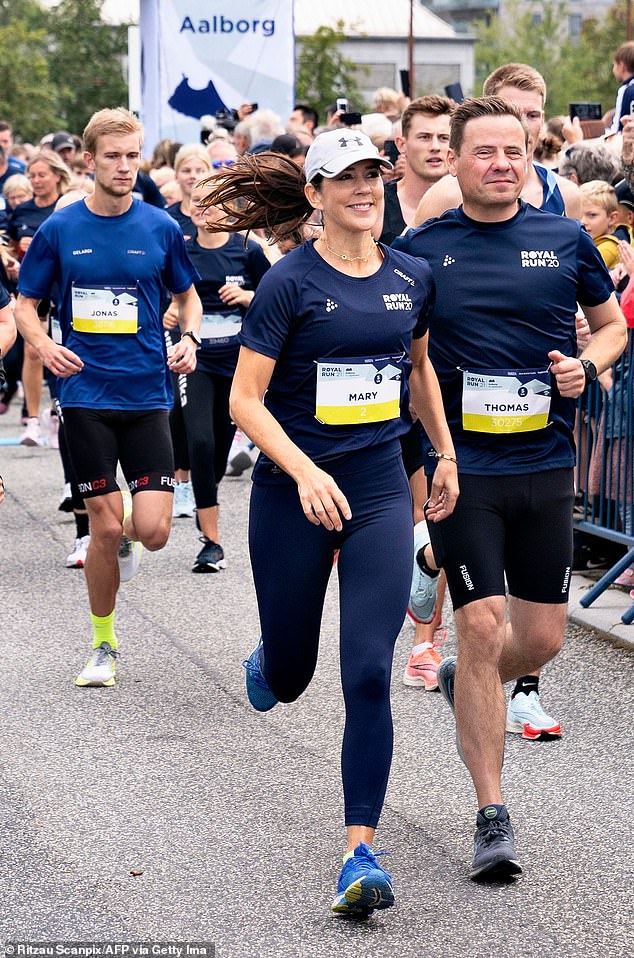 The couple’s children – Prince Christian, 15, Princess Josephine, 14, and twins Princess Isabella and Prince Vincent, 10 – were also set to run, but the location and distance was kept secret ahead of the event.

It transpired that the royal children took part in the one-mile event in Copenhagen, apart from Prince Christian, who reportedly did not run.

The Royal Run caps off a busy beginning to September for Princess Mary, who touched down in Italy just days ago for Milan Design Week, kicking off the event at an unveiling of her own sustainably made portrait.

Last week, she attended an exhibition at the Museo Nazionale Scienza e Tecnologia Leonardo Da Vinci, which featured a portrait of her made entirely from recycled material. 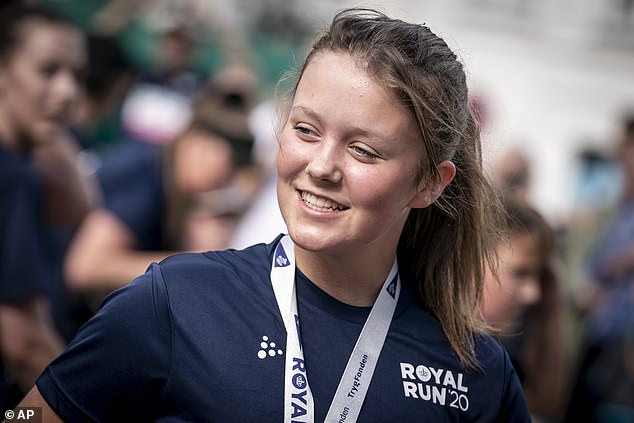 Denmark’s Princess Isabella showed off her medal after taking part in the one mile Royal Run, in Copenhagen today 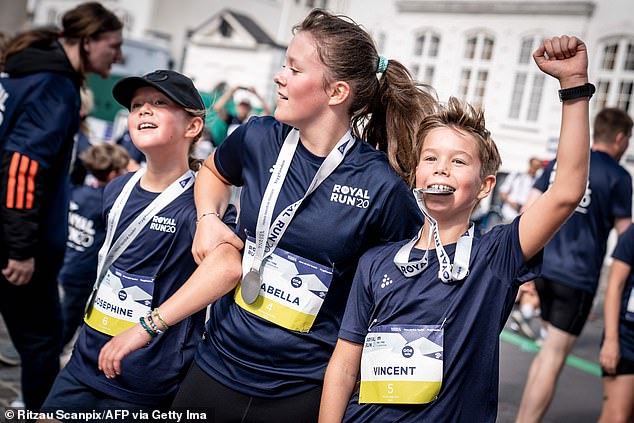 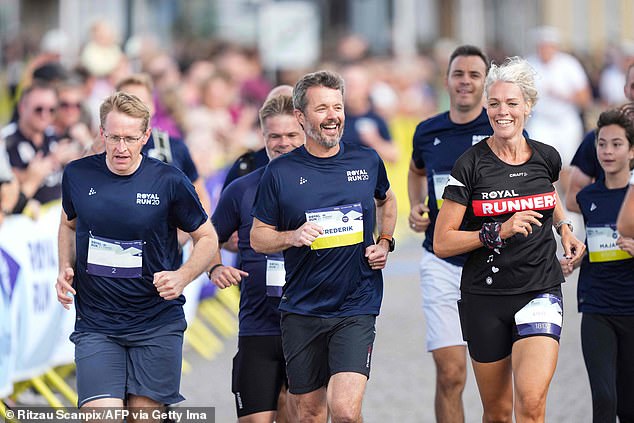 The artwork depicted the Australian-born Princess in a tiara, a blue sash and an ornate brooch, with her head glancing to the side. Shards of broken glass were used to create a mirrored reflection in the background.

The painting was created as part of the ‘Scart Initiative’, a project which commissioned a number of artworks produced from recycled materials for Milan Design Week, the world’s largest annual furniture and interiors event.

The event also featured a ‘TrashFormation Village’, – featuring furniture made by Danish designers from plastic waste and wood.