“Nags to riches!” was the predictable headline chosen by the tabloids to sum up the events that inspired Dream Horse. It’s about a syndicate of Welsh villagers that successfully took on Britain’s racing establishment with a horse raised on an allotment reclaimed from an abandoned slagheap.

It’s a story with all the hallmarks of a typically British feel-good movie in the tradition pioneered by the Ealing comedies of the post-WWII years when the country needed all the laughs it could raise. 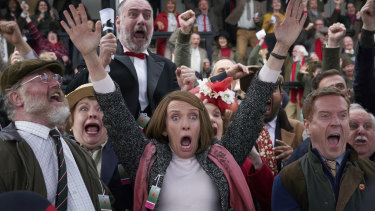 Ealing’s big hits, Whisky Galore! Passport to Pimlico and The Titfield Thunderbolt, were infused with a folksy spark of rebellion which they applied to tales about villages and neighbourhoods standing up to the authorities with creative ways of beating the system and its rules, restrictions and prejudices. These films all extolled the pleasures and powers to be had from communal action and Dream Horse takes the same stand, strengthened by the fact that its plot is rooted in reality.

The syndicate’s adventures first unfolded in a documentary, Dark Horse: The Incredible True Story of the Dream Alliance. It premiered at the Sundance Festival in 2015. And this, the dramatised version, made its equally popular Sundance debut this year. Its star is Toni Collette gamely taking on a Welsh accent, as Jan Vokes, the syndicate’s founder and chief organiser.

Naturally enough, the aim of a feel-good movie is to make everybody, cast and audience alike, feel better, so they frequently start from a low base.

That is certainly the case here. The film opens as Jan dolefully rises from bed after a fitful night spent listening to the thunderous snores of her husband, Brian (Owen Teale). Dawn is almost breaking – and so is she – as she walks to her cleaning job at the local supermarket before switching to the check-out.

At lunch-time, she seizes half-an-hour to look in on her aged and ailing parents and at the end of the day, she gets Brian’s dinner before heading off to her night-time job behind the bar at the village workers’ club.

The club is not exactly bubbling with good cheer either. The workers lost their jobs when the nearby mine closed down and money is scarce but Howard Davies (Damian Lewis), a new customer, is managing to lighten the mood with his reminiscences about his experiences as the member of a syndicate of racehorse owners.

Intrigued, Jan starts studying the form, researches bloodlines and training stables and an obsession is born. Desperately in need of something to keep hope alive, she decides horses and racing could be it.

Now she has to find other people who can feel the same way. They also need to come up with £10 a week to pay for the horse’s breeding, training, stabling and feeding. At first, it seems impossible but gradually, they appear. Brian backs her from the start because he’s jobless and the project gives him an excuse to get out of his armchair.

Howard comes on board because he admires Jan’s determination. Kerby, the local drunk (Karl Johnson) unearths his ten quid because he doesn’t like to be left out of anything. In other words, she assembles a group providing rich pickings for any British character actor relishing the chance to play the eccentric. And Collette anchors the group with a vital strain of earthy common sense brightened by her familiar grin, which she breaks out more frequently as things start looking up.

Inevitably, the syndicate is heavily patronised by racing’s lordlings but Dream, the foal they breed, grows up to be dynamic enough to attract the attention of one of the sport’s most hard-headed trainers and his progress is assured.

There’s one flaw in the formula, however. It lies in Britain’s long-running affair with the steeplechase, which is banned in New South Wales and Tasmania. These are the races that form the film’s climaxes and the sight of so many horses and riders crashing to the ground at the end of a jump does tend to spoil the party.