It’s a story worthy of a Hollywood screenplay and Foo Fighters frontman Dave Grohl is just the guy to write it, direct and play the starring role.

Just a few weeks ago, it was Grohl who came up with the idea for Foo Fighters to fly to Australia and be the first international act to play a stadium show in two years. 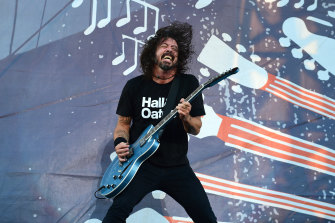 A plan was quickly hatched to turn Grohl’s idea into reality and on Friday night, 30,000 people will descend on GMHBA Stadium at Kardinia Park in Geelong to soak up the live energy of one of the biggest rock bands on the planet.

It all happened “in three weeks from phone call to encore”, says Frontier Touring chief operating officer Dion Brant, who seized upon Grohl’s early morning brainwave and had the perfect location – Geelong – in mind.

“It was Dave Grohl’s idea that Foo Fighters should come down and be that first big international to bring rock back to Australia,” Brant said. “He woke up to news just a couple of weeks ago that Australia had opened its borders and, from there, we jumped straight into action. [Frontier has] been working with Kardinia Park for three or four years, to try and get a show down there.

Coinciding with the Australian cinema release of horror comedy film Studio 666, featuring Grohl and his bandmates battling supernatural forces, tonight’s show is the band’s first in Australia since 2018.

Organisers will be hoping rain stays away from the packed stadium, after the Bureau of Meteorology forecast a 70 per cent chance of rain in Geelong with cloud building in the afternoon, and the chance of a thunderstorm in the evening.

The concert also lines up with the Victorian government’s announcement of the Always Live program, which puts local artists and emerging talent on the same stage as international touring acts and aims to deliver live music attractions across regional Victoria, the CBD and surrounding suburbs.

“It’s going to be great for the tourism [and] of that region, for the events scene of that region,” said Martin Pakula, Minister for Tourism, Sport and Major Events, about the show in Geelong. The government says it will be followed by “dozens of events held at venues across Victoria” later this year.

It’s going to be a shot in the arm for the whole industry.

Local MP Christine Couzens said the regional city was booking out and would be “buzzing” with other major events.

“Geelong’s really excited about this opportunity. It’s not often that you get a band like Foo Fighters coming to a regional city, so we are very excited about it,” she said.

Hotels and Airbnb accommodation across the city have filled with bookings and Brant said benefits to the regional community would extend beyond the initial rush of live music. 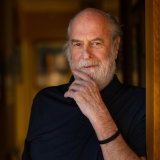 Michael Gudinski had a long association with the Foo Fighters, who first toured Australia in 1995.Credit:Simon Schluter

“It’s going to be a shot in the arm for the whole industry, to see 30,000-plus people standing in front of a stage with a full-on rock band and a big, full production,” he said. “When you look at the impact of the show and for people working at the stadium, whether it’s in the bar, selling merchandise, whether it’s in the Barwon Club down the road, the Ubers around town, the hotels … it’s tens of thousands of people involved … so that’s really exciting as well.

“This is a stadium that’s never done a show, so we had to draw plans – get seating plans and builds done, source stages and fences, barriers and ground cover, all of the infrastructure you need to put on a big show like this. And all through suppliers locally who haven’t had a lot of work for the last couple of years, so they all had to re-start and get going again.”

He said the late Michael Gudinski, who formed Frontier Touring in 1979, would “be stoked to have this band doing this and stoked it was Frontier leading the way out” after two years of cancelled tours.

Gudinski, who was also chairman of Mushroom Group, died on March 2 last year. He had been a major voice working with government on the development of the Always Live program.

“In his words, Michael would be vibing this week. He would be uncontainable,” Brant said. “It’s such a poignant week for it to happen. We all know he would be excited.

“We think he’s probably behind it somehow … if there was anybody in the other world pulling strings, it would be Michael Gudinski.”

Music Victoria chief executive officer Simone Schinkel said a Foo Fighters stadium show with supports from Melbourne bands Amyl and the Sniffers and the Meanies was a huge vote of confidence in the local industry.

It’s one gig, but these things have ripples and if we can be confident to turn up at this gig, we’ll be confident to go to other smaller gigs as well,” she said. “It’s also a real sign that we love music in this state, it’s a key driver of our economy, our culture and our society.

A cultural guide to going out and loving your city. Sign up to our Culture Fix newsletter here.