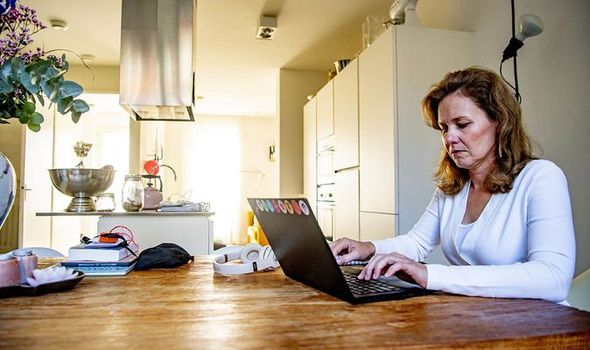 And 47 percent of the 2,000 adults polled who are currently working from home said that while they do head outside to exercise within government guidelines, it is usually once they have finished work and the sun has set. As a result, the average worker has three days a week where they spend all day inside, with 22 percent not seeing daylight for the entire working week.

But 80 percent admitted the amount of time they spend in the sunshine impacts their mood, with 64 percent feeling more irritable due to being stuck inside all day.

A spokesman for Vitabiotics Vitamin D, which commissioned the research, said: “Winter always sees the time we spend outside drop off, as the cold, wet and icy weather makes us want to spend more time indoors.

“But this year, as many work from home due to the restrictions, they aren’t even able to spend the time outside that they usually would while commuting to and from the office, or getting out and about on their lunch break.

“Worryingly, despite being allowed to exercise outdoors in their local area for a short time each day, many are too busy to even do this during work hours, or simply sit in their garden for some fresh air.”

The study also revealed the longest the average adult has gone without going outside in daylight this winter is six days, but almost one in 10 have gone two weeks or more.

While 13 percent blamed this on shielding or isolating, 32 percent are ‘too busy’ to take a lunch break.

More than four in 10 (42 percent) don’t have a reason to go outside and 21 percent are bored of their local walks around their home, so don’t bother going out anymore.

But 42 percent are planning to try and work outside in their garden when the weather warms up to increase the time they spend in the sun.

Almost half (46 percent) said being outside gives them time to think while 68 percent use it as an opportunity to exercise.

Others go outside to get fresh air (77 percent) because it’s good for their mental health (70 percent) and to give themselves a break from their computer screen (58 percent).

The study, carried out via OnePoll, found the lack of time outdoors means 33 percent don’t think they currently get enough vitamin D, while another 23 percent don’t know if they do or not.

Almost half (48 percent) of those polled take a supplement to boost their vitamin D levels, with 52 percent of those starting to take one this winter as they spend more time inside than usual.

More than one in three (34 percent) have also been making more effort to eat foods high in vitamin D.

To find out if your lifestyle is giving you the vitamin D you need, take the quiz.