The nation’s peak medical body is seeking changes to the way the scientific panel advising the government on vaccine safety makes and communicates crucial decisions amid a political storm over whether Prime Minister Scott Morrison has tried to pressure the group.

The Australian Medical Association wants greater transparency around the independent technical group’s recommendations on who should take COVID-19 vaccines from AstraZeneca, Pfizer and others, reflecting concerns it needs to hear more views from general practitioners working in the community. 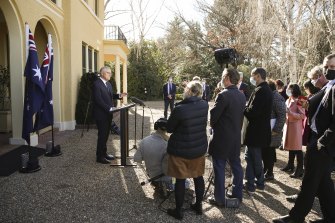 Prime Minister Scott Morrison wants a review of the scientific advice on AstraZeneca given the changing balance of risks.Credit:Alex Ellinghausen

AMA vice-president Chris Moy praised the Australian Technical Advisory Group on Immunisation (ATAGI) members but said it was reasonable for stakeholders, including Mr Morrison and medical groups, to make suggestions about the way the group worked.

Labor has accused Mr Morrison of pressuring the group after he said on Wednesday he had made a “constant appeal” to ATAGI to reconsider its stance on AstraZeneca in light of a changing balance of infection risks.

ATAGI has been advising governments since 1998 on technical issues about which vaccines should be on required lists, such as the National Immunisation Program Schedule, and for which age groups.

But it has been thrust to the forefront of the fight against COVID-19 with statements that are sometimes posted without notice on a federal government website or communicated by Mr Morrison at evening press conferences.

On April 8, at a press conference held at 7.15pm, the Prime Minister announced ATAGI believed the risk of a rare blood clot condition meant Pfizer should be the preferred vaccine for people under 50. The expert group went further on June 17, saying Pfizer was preferred for people under 60.

Mr Morrison, who has expressed his frustration with the group for weeks, on Thursday defended his questioning of ATAGI’s advice in the face of the Labor attacks.

“It is my job as Prime Minister not just to simply accept advice uncritically,” he said.

“Of course I challenge the advice that I receive. I ask questions. I drill into it. You would expect me to do that. I think Australians would not expect me to just take this advice simply on the face of it. We must interrogate it.”

Mr Morrison argued the “balance of risk” had shifted since the April and June decisions because of rising COVID-19 case numbers and the greater threat of infection among people, especially in older age groups, who had decided against vaccination because of the ATAGI advice.

“Those people are now at risk in south-western Sydney in particular, but more broadly across Sydney, and I need AstraZeneca vaccines in their arms to protect them and their lives,” he said.

While Australia’s imports of Pfizer’s COVID-19 vaccine are ramping up, it currently has more stock of AstraZeneca, which is being manufactured by CSL in Melbourne.

Dr Moy said the AMA would propose changes to ATAGI so there was more transparency around its decision making and improvements in the way it communicated its advice.

“But if it is construed that you’re trying to influence an independent committee, that’s where you have a problem.”

Asked if he believed Mr Morrison did create such a problem, Dr Moy said: “I think that would have been easily construed by some.”

Stephen Duckett, a former Health Department secretary who now heads the Grattan Institute’s health program, said poor communication around the changes to ATAGI’s advice had undermined the AstraZeneca vaccine and the advisory group.

In normal times, the group’s work was not at all political, Dr Duckett said.

But decisions that balanced risks were necessarily political calls, unlike a straight epidemiological decision based on evidence about a vaccine’s side effects. Because of this, he said it wasn’t unreasonable for Mr Morrison to ask the group to re-examine its advice.

“The advice process and the announcement process, I think contributed a lot to the undermining of confidence in AstraZeneca,” Dr Duckett said.

University of Sydney vaccination communication expert Julie Leask said ATAGI had provided leeway in its statements – saying Pfizer should be the preferred vaccine for under-60s rather than banning AstraZeneca – but this flexibility had either gone unnoticed or been miscommunicated.

“The communication has been wanting all the way along, such that when people were told by the PM that it would okay to have it under 40, everyone was shocked as if it was a reversing of the recommendation,” Professor Leask told ABC’s Radio National. “I think in retrospect that should have been picked up on and the communication around that, the leeway they were giving made clear.”