Colombia didn’t invent the narcotics trade, as Birds of Passage director Cristina Gallego points out. Pablo Escobar and his rival drug lords may have forged the country’s recent identity as a hotbed of heavily armed traffickers living it large in their Medellin fiefdom, a narrative reinforced in popular fiction such as Netflix’s Narcos. The reality, however, is much more fragmented: a story of very poor people whose traditionally determined lives were fatally altered, little by little, by what they called at the time ‘‘the bonanza’’. 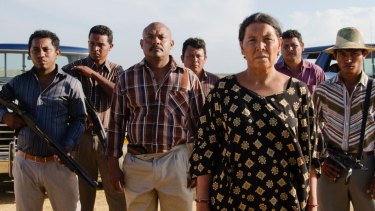 Cristina Gallego and Ciro Guerra say their film has elements of Greek tragedy, film noir, magic realism and the western.

‘‘This idea that we are narco traffickers or terrorists is very unfair to us,’’ says Gallego. ‘‘The idea was that the business started here, but it came from people outside looking for marijuana and cocaine.’’

They could have been selling anything, says Gallego’s directing partner – and former husband – Ciro Guerra. What ruined the lives of the clan at the centre of Birds of Passage was not drugs, but money. ‘‘The arrival of savage capitalism,’’ Guerra says. ‘‘That is what destroys the family and their traditions.’’

Gallego and Guerra have previously collaborated on a string of films, the last of which was the Oscar-nominated arthouse hit Embrace of the Serpent (2015), a dreamy evocation of an encounter between two western scientists and an Amazonian shaman. The idea for Birds of Passage had been with them since well before that unexpected success; it is based on stories they heard a decade earlier in the remote north-east of Colombia when they were making a film called The Wind Journeys.

This is the land of the Wayuu, tribal Indians who live by herding goats and selling textiles in country that looks in this film too dry to support a family of lizards. Despite the chaos and killings of the bonanza years, says Guerra, many of the Wayuu remember them nostalgically as ‘‘one big party’’: two decades of riches in the midst of centuries of poverty.

Birds of Passage is set between 1960 and 1990. The Wayuu society is complex, traditional and bound up in a web of belief we can see immediately is beyond our understanding. In the first sequence, we hear a singer begin to relate the story we are about to witness in a jayeechi song, a traditional form of canticle used to record and relate history.

Next we see Zaida, a young woman who has been confined for a year preparing for womanhood, step out into the midst of the village to perform a bird-like dance with her younger brother. Another young man called Rapayet – unknown to her, but of her clan – steps up to court her with the same dance.

Men are in control here, but older wise women call them out; Birds of Passage is seen through the eyes of the stoic Ursula, mother to Zaida, and a middle-aged seer who interprets dreams and signs and is steeped in local lore and custom.

Ursula regards Zaida’s suitor with suspicion. The family accordingly demands a large dowry, but Rapayet and his daredevil mate Moises have discovered a way to make money fast. They will sell the local gringo Peace Corps volunteers something they really, really want: dope. A distant uncle apparently grows it and will go in on a deal. The lads, who speak Spanish, are the middle men.

It isn’t long before other, much shadier Americans make overtures to them, meaning that their trade grows and the money rolls in. It also means they tangle with increasingly unsavoury drug-runners: gangsters.

A decade down the track, Rapi, Zaida and their two children have moved from a hut with hammocks into a crenellated villa, but they have also ransacked the sacred graves of their forefathers to create space to hide their arsenal of weapons. Someone gets shot. Someone else gets raped. The guns come out of the grave; the clans are now at war. Ursula has foreseen it all but, like Cassandra, she is ignored. As the Wayuu desert their principles, even she loses touch with their invisible spirit guides.
Greek myth was one of their inspirations, says Guerra, even as they focused on getting details of Wayuu language and culture right.

‘‘We thought this is a very particular story in that it has elements of the western, of film noir, Greek myth and magical realism as well; there were so many things that we could see in the story that fitted naturally. 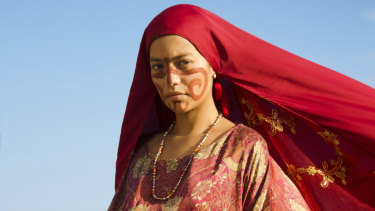 Visually, there is more than a whiff of Sergio Leone in the film’s wide open spaces and hard colour palette. ‘‘The Wayuu society has a very strong relationship to colours. They mean things. People use them in their clothes, and they use different ones for different moments in their lives.’’

The success of Embrace of the Serpent, which took them to festivals around the world, delayed work on whatever was to come next. They set out to make something entirely different from that film, shot in lyrical black and white, but Guerra suspects they are closer than they wanted to think.
‘‘What I realise now is that all our films are very different from each other, but only in very superficial aspects. The profound currents of the films – themes of spirituality and myth, of the relationship between consciousness and dreaming, man’s relationship to nature – are deeply connected.’’

The account of events around drug-running draws on real stories without retelling any of them exactly.

‘‘Fiction is the way we organise it,’’ says Guerra, ‘‘because we don’t want someone to feel we are telling exactly their story. There were many warring families. I know of at least 12 and the biggest one led to the deaths of 300 people.’’

They were also determined to tell that composite story through the eyes of a woman, given that the general consensus was that women were not involved in the wars. ‘‘They were in the kitchen,’’ they were told. But how could they not be? How far away were the kitchens?

Gallego, who had always sat in the producer’s chair for their joint projects, took on the directing role to carry that shift of emphasis through. ‘‘We wanted to make a genre film,’’ she says. ‘‘But we realised we hadn’t seen this kind of story from a female point of view. The twist is my involvement.’’

We realised we hadn’t seen this kind of story from a female point of view.

Central to the story of Birds of Passage is the Wayuu people’s historic resistance to any influence or interference from outsiders, but that did not extend to the film; Gallego says they were proud to share their history and beliefs to tell an authentic story, even if it wasn’t a flattering one.

‘‘They are used to dealing with foreigners,’’ says Guerra. ‘‘They haven’t let anyone in from government’’ – one character in the film says brashly that they have seen off both the English and the Spanish – ‘‘but they are used to trading with foreigners all the time. They were poor. Before marijuana, they used to trade booze, cigarettes, clothes: whatever they could.’’

The society is closed to protect the integrity of the culture. ‘‘But they were very enthusiastic about being part of a film because they are interested in ways to tell their own stories,’’ he says. ‘‘There were a lot of Wayuu people behind the camera as well as actors. So it was an opportunity, as it always is when a foreigner comes in. It’s business.’’ That’s right, says Gallego; in a poor region, being able to get jobs building sets and to rent land and animals to a film crew is a windfall. It reminded them of another time. ‘‘They said this film was their new bonanza.’’

Birds of Passage opens in selected cinemas on October 3.