Like all the very best ideas, audio drama Moriarty sprang from something as innocuous as a soccer ball. Actor Dominic Monaghan had been in talks with production company Treefort over a television series on the history of his beloved football code when the conversation strayed to his other fields of interest.

Aside from his passion for entomology – when he wasn’t starring in Peter Jackson’s The Lord of the Rings trilogy and the television series Lost, Monaghan, 45, hosted his own natural history series Wild Things – he mentioned he was a fan of Sir Arthur Conan Doyle’s Sherlock Holmes books. 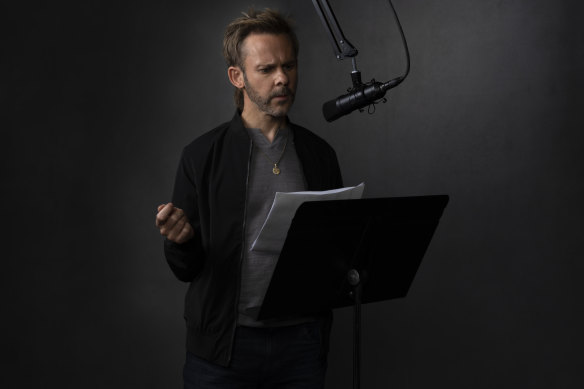 Dominic Monaghan in the studio recording Moriarty: The Devil’s Game for Audible.Credit:Audible

What emerged, Monaghan says, was the idea that “the second-most charismatic person in the Sir Arthur Conan Doyle canon is [Sherlock Holmes’ nemesis] Professor Moriarty. He’s a genius, he’s a chess grandmaster, he’s a profound mathematics professor, and the only person who really bests Sherlock Holmes a few times in those books.

“To best Sherlock Holmes, clearly you have to have something about you, and we just thought, what if we spin this 180 degrees and Moriarty is someone who is framed for a crime that he didn’t commit. He’s highly suspicious, he’s highly paranoid, his fiancée goes missing, and Sherlock Holmes is someone that’s on the other side of the narrative trying to trip him up.”

The result is Moriarty: The Devil’s Game, a 10-part fictional podcast – the fancy modern name for radio drama – from the Amazon-owned podcast studio Audible. It stars Monaghan as Moriarty, Billy Boyd as Moriarty’s Dr Watson-esque collaborator Colonel Sebastian Moran, and Phil LaMarr as Sherlock Holmes who is, in this story, not the hero, but rather Moriarty’s nemesis, determined to bring him down at any cost.

Flipping the script, so to speak, did open up one concern for all parties at the table: that by effectively turning Moriarty into a misunderstood hero and Holmes something of the story’s villain, Sherlock Holmes fans who were devoted to the canon of the original books could be offended. Based on online reaction to the series, it seems that fear has not borne out.

“Sherlock Holmes is a detective in this world, he is someone working alongside the police – we’ve just slightly shifted the angle whereby instead of the police being noble and doing the right thing, some of them are being paid off by certain people, [and] they let Sherlock Holmes get away with things that maybe ordinarily he wouldn’t. The lines are a little blurred,” he says.

“Obviously, Moriarty in our story is our hero, but he’s not necessarily a good guy, he does have moments of anger, moments of frustration – he’s willing to lean on the criminal underworld,” Monaghan adds. “And Sherlock Holmes isn’t the bad guy in it, he’s a detective working with the police, but he has his own personal agenda.”

Boyd, Monaghan’s co-star in Peter Jackson’s The Lord of the Rings film trilogy and his conversational sparring partner in their weekly podcast The Friendship Onion, stars as Colonel Moran. He was drawn into the project relatively easily. “When it got close to casting the series, they said, we’re essentially looking for your Watson,” Monaghan says.

“Billy and I have known each other for over 20 years now; the great thing about Billy, outside him just being a great actor and knowing that he was going to bring everything to the table, is when you’re working with someone new, you have to go through that shorthand of getting to know them,” he says. “Billy and I don’t need that. 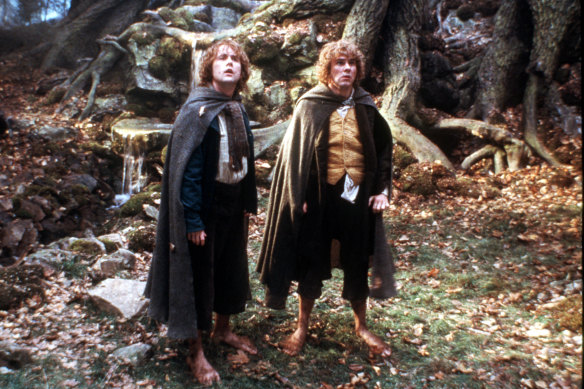 Billy Boyd as Pippin and Dominic Monaghan as Merry in a scene from The Lord of the Rings: The Two Towers.Credit:Pierre Vinet/New Line Cinema

“We come into the studio, we know that we’re ready to go, we know what we need to do to make each other laugh or get each other in the right headspace, and it just means that you can conserve a little bit more energy,” Monaghan says. “Billy’s a fantastic actor and at some point I think probably we are exploring turning this into a TV show.”

The pair’s weekly podcast The Friendship Onion, wildly different (obviously) to Moriarty, is something of a Trojan horse. It is presented as a podcast of a conversation, but it’s really actually about two men who are, in real life, best mates, and it leans into that relationship for both its humour and emotional context.

The key to their chemistry, Monaghan says, is no preparation. “We perform better, if we’re in a staged or film environment, when everything is off the cuff, and we don’t know what’s going on,” Monaghan says. “Very often when we were doing press [together, for The Lord of the Rings] someone would start to tell us what they were going to ask, and Billy and I would immediately say no, don’t tell us, just ask us.

The radio drama genre is not an unfamiliar space to Monaghan; in 1999, he starred in the BBC radio comedy Stockport, So Good They Named It Once, about the Conroy family living near Manchester. “There are a few things that don’t change, you do have to still use your face, your body. If you’re angry in a scene, you still have to evoke a sense of anger and go through that experience,” Monaghan says.

“What is different is when they say cut, you don’t have to wait to reset or move lights, or move to a different scene, so there is a quick element to how you work and that keeps you in a condensed working space,” he says. “In the course of a day we did between 15 and 20 scenes, and on a film or TV set you’d do three or four scenes in a day. So it’s fast and it’s frenetic.” 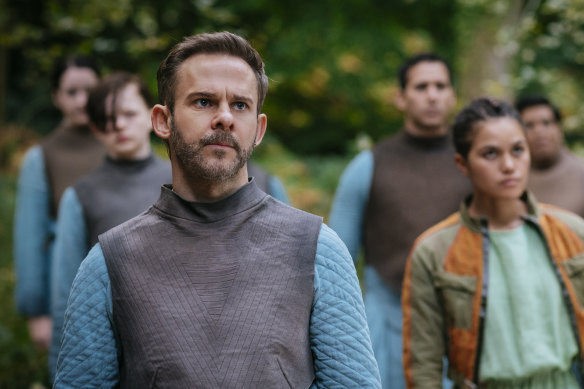 Though it is made in America, to some extent American culture remains somewhat unfamiliar with the format. There it is an audiobook performed by actors, but in a more traditional sense, it is indistinguishable from a radio drama, in the style of the BBC’s famous 1981 radio adaptation of The Lord of the Rings, or its long-running radio serial, The Archers, which has aired six nights a week on British radio since 1951.

In global terms, the boom in podcasting has made the format seem more like a modern invention, more directly pitched at a younger audience than traditional radio drama. Largely driven by FM radio-style conversation shows and audio documentaries (particularly in the true crime genre), Moriarty reflects a wider trend by American podcasting studios pushing into the arena of fiction.

Audible, for example, is also developing scripted comedy, including Self Center, starring Judy Greer, Kim Cattrall and Jane Lynch, and Summer in Argyle, starring Bob Odenkirk. It has other dramas on its slate, including Fishpriest, starring Ethan Hawke. And Spotify has signed a deal to develop scripted content with award-winning filmmaker Ava DuVernay.

“In the last decade or so podcasts have just exploded as a medium [and] it’s hard to have a relevant voice, and the medium of podcasting is still trying to work out where it can go to, what places it can move into,” Monaghan says. “Weekly podcasts focus on what’s happening in the week that you are interested in, politics or crime, or the stories of film or TV.

“A fictionalised podcast told in episodic form is something that is slightly breaking new ground in the podcast field, but [for the major studios] Spotify, Apple and obviously Audible … it’s a place to tell new stories,” he says. “The key is finding an audience, and we’re hoping to be able to do a season two relatively quickly. They’re very charismatic characters created by Conan Doyle, and I think there’s a lot of places we can go with them.”

Moriarty: The Devil’s Game is available on Audible.