Paedophile Gary Glitter’s body language in interviews dating back to 1992 reveal he felt ‘anxious’ and defensive when questioned on his relations with ‘very young’ women, experts say in fresh analysis for TV documentary

Paedophile singer Gary Glitter ‘gave away his guilt’ in interviews dating back to 1992 by flashing smiles, gulping and ‘freezing’ after being asked directly about his relations with ‘very young’ women, experts have claimed in fresh analysis.

The disgraced 70s pop star was jailed for 16 years in 2015 for sexually abusing three young girls between 1975 and 1980, having also served time in 2006 for molesting girls in Vietnam.

In a new documentary titled Gary Glitter: A Faking It, which airs on discovery+ on Saturday, experts in forensic psychology, body language and linguistics analyse TV footage filmed across Glitter’s career to reveal the tell-tale signs that gave him away as a liar and a prolific sex offender.

The footage includes his car crash interview from a Vietnamese prison with the BBC in 2006, where experts revealed five signs of guilt, and two appearances on daytime television in the 1990s.

INTERVIEW ON THE BIG BREAKFAST IN 1992 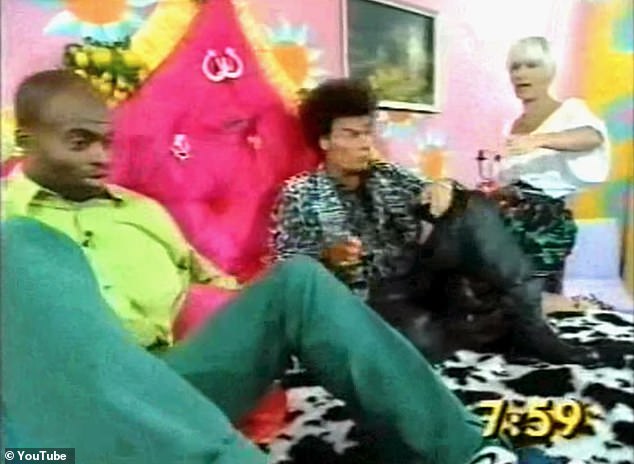 During an interview with with Paula Yates on The Big Breakfast, she spoke to Glitter about his playboy lifestyle, catching him off guard by asking if the girls he drove to his house are ‘very young’. Professor of Linguistics Dawn Archer highlighted features in Glitter’s behaviour that suggest anxiety and nerves that his secrets would be exposed

During an interview with with Paula Yates on The Big Breakfast, she spoke to Glitter about his playboy lifestyle, catching him off guard by asking if the girls he drove to his house are ‘very young’.

Professor of Linguistics Dawn Archer highlighted features in Glitter’s behaviour that suggest anxiety and nerves that his secrets would be exposed: ‘It’s almost as if though Paula Yates is inviting this to have different levels of meaning.’

‘We have a two-second pause, they exchanged looks together, and then he spoke to her rather than the audience. It almost feels like a game between them.’

As the tension during the interview increases, Yates asked Glitter ‘are they very young?’ Struggling to answer, Glitter paused for two seconds as his anxiety increased. 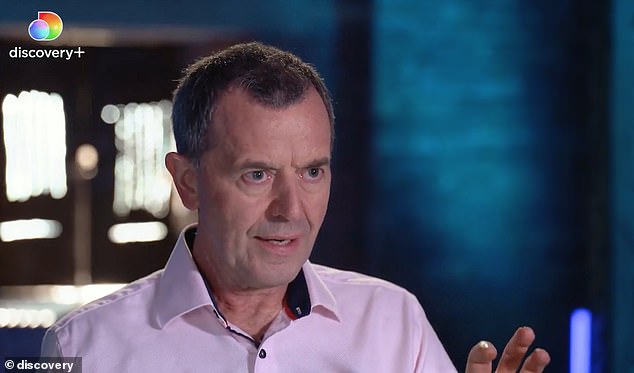 Body Language expert Dr Cliff Lansley (pictured) explained: ‘We’ve got this thousand-yard stare which we do sometimes when you’re trying to work out ‘how do I get out of this’

Body Language expert Dr Cliff  Lansley explained: ‘We’ve got this thousand-yard stare which we do sometimes when you’re trying to work out ‘how do I get out of this; how do I move?’

For Archer, it’s damning evidence of his guilt: ‘Now we’re left in no doubt whatsoever; they’re associating Gary Glitter, for whatever reason, with young girls,’ she says.

APPEARANCE ON THIS IS YOUR LIFE IN 1992 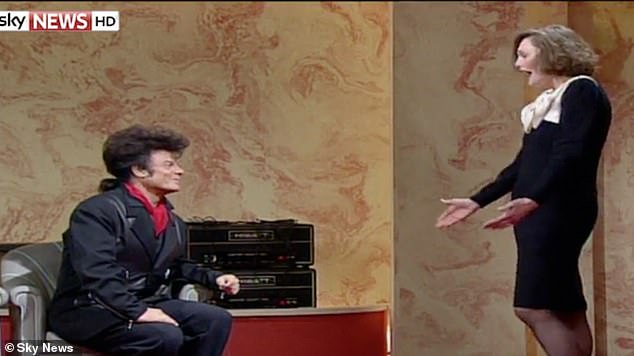 In a 1992 episode of This is Your Life, Roald Dahl’s daughter Tessa told how Glitter stayed with her family when he was ‘between jobs’ and was often surrounded by schoolgirls who paid £5 to ‘gaze’ at him. Body language expert Dr Cliff Lansley said his forced smile was an indicator suggesting anxiety at the truth coming out

In a 1992 episode of This is Your Life, Roald Dahl’s daughter Tessa told how Glitter stayed with her family when he was ‘between jobs’ and was often surrounded by schoolgirls who paid £5 to ‘gaze’ at him.

‘As soon as she raises the subject, his Adam’s apple pops out as he gulps at the prospect of how far is she going to go with this story. And we’re hot under the collar, the pulling down of the scarf away from the throat,’ he explains. 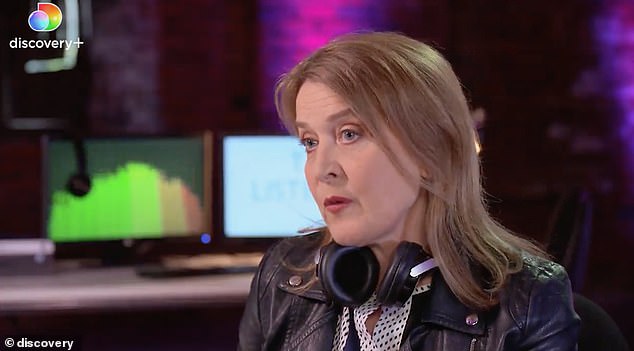 ‘If we zoom in closely, where the muscle that pulls back the lip sideways towards the jaw, which only activates when we are showing fear. And if you look closely here, the lips are being pulled not upwards in a smile, but sidewards in a micro expression of fear.’

In the interview, Glitter attempted to mask his fear with a forced smile. Cliff continued: ‘The expression of fear is below consciousness, and it’s hard to do.

‘But one of the easiest actions to fake is the smile. So, moving these lip corners upwards. And that tension that that creates in the face can mask and cover the emotion that people are genuinely feeling. This is a fake smile.’

INTERVIEW WITH BBC FROM INSIDE VIETNAMESE PRISON 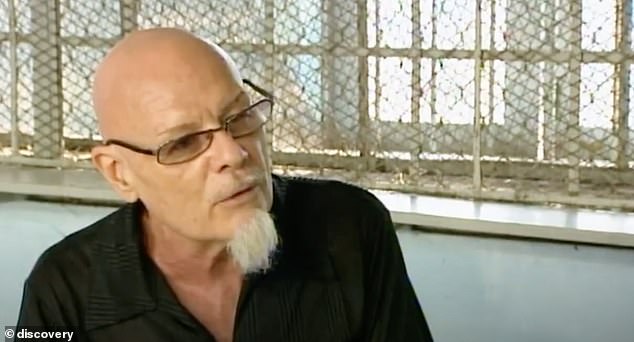 In May 2006, Glitter tried to convince the world of his innocence by speaking to the BBC from inside prison. Lansley said that his eyebrows up, wide eyes and open mouth were a sign of guilt

But Glitter’s most revealing moments came after his initial conviction for possession of child pornography in 1999. Fleeing Britain after his conviction, Glitter was arrested again 2005 for child sex offences in Vietnam.

In May 2006, Glitter tried to convince the world of his innocence by speaking to the BBC from inside prison. Asked if he had ever slept with an underage girl, Glitter answered ‘not to my knowledge.’

Lansley said: ‘He clamps his hands together. This is what happens when we experience fear or anxiety. You see his right fingers gripping into the back of his left hand. We see a slight raise of his left shoulder.

‘To its full extent, a shrug is usually the shoulders up and hands with palms outwards. It means ‘I’ve no idea what I’m talking about’.’

A rise in pitch in Glitter’s voice also underlines his deceit, with Cliff explaining: ‘When we tighten up with anxiety, that tightens the muscles around the larynx and the throat, and that can lift the voice up.’

Archer said that patterns in Glitter’s speech are also tell-tale signs of deception: ‘We have flow issues and stuttering and a false start.

‘We have ‘I don’t believe’ which is a qualifier and it’s not the same as saying ‘I categorically haven’t. It tends to be done more by people who are attempting to deceive because they tend to fall into convince mode; they want to convince us that they are telling us the truth and therefore become more emphatic.’

During the car crash interview with the BBC, Glitter denied the allegations by commenting ‘I know the line to cross.’ 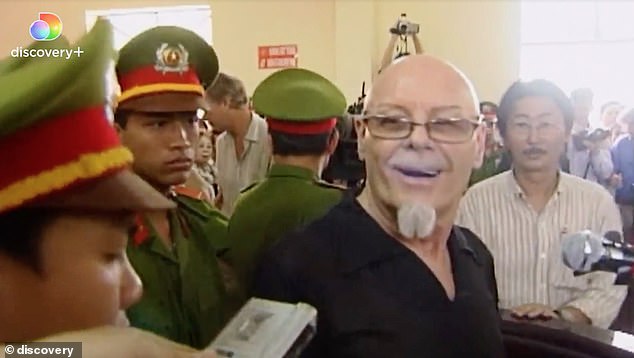 Glitter is pictured inside a Vietnamese prison in 2006. Dr Lansley said that a muscle pulls back the lip sideways towards the jaw when we feel fear and this can often be turned into a smile

Picking up on this error, the interviewer goes for the jugular, challenging Glitter’s pleas of innocence. Paralysed by fear, Glitter pauses for five-seconds.

Lansley explained the five gestures that signpost the sinister truth: he’s guilty. ‘You’ve got the eyebrows up and the eyes wide, and the mouth open.

‘We get the head and the body moving backwards. When we’re under attack and we’re fearful, we move away from the threat. His eyes close, his mouth closes, and then he licks his lips which signal the level of anxiety.

‘That anxiety will dry the mouth, and the way to compensate for a dry mouth is to swallow or lick the lips. If he was on a polygraph right now, his heart would be fluttering at 120 beats-per-minute, his blood pressure would be through the roof, and his palms are probably quite sweaty. Gary Glitter is paralysed with fear and it lasts for five seconds.’

Asked what his response would be seeing someone in a similar position – a middle-aged man accused of child sex crimes – Glitter stuttered through his response.

‘He’s struggling to get the words out’, said Lansley. ‘We get this meandering and, in the middle, we get another freeze response where he sticks almost like a broken record.

Examining Glitter’s speech, Dawn Archer underlined a further five moments of interest within his 10-second response, indicating his lack of confidence in covering up his guilt.

‘We have flow issues. He begins with a false start – ‘I would’ – and then he goes on to say, ‘well certainly it would be a crime,’ she said.

‘And then we have a two second pause, and we have lots of ‘er, er, er,’ which is another indicator of flow issues. And he has another false start. There’s then an ‘I’ omission, where he says, ‘don’t have the words.’

Gary Glitter: A Faking It Special is available to stream from Saturday 25th September exclusively on discovery+