We can’t even see most of the universe, most probably, but the star count is already so massive that there are too many strings of noughts to get your head around. “We have discovered there are 2 trillion galaxies in the piece of the universe we can see. That’s a fact,” says Professor Brian Cox, whose job it is to keep us abreast of facts like these. “Two trillion, each one, give or take, the size of the Milky Way – so let’s say 100 billion, maybe a trillion stars in each one.” It makes Earth seem very small indeed.

This is the stuff of the good Mancunian professor’s spectacular new series Universe, which deals with how stars came into being, the latest discoveries about black holes and the fact that there are planets out there that are like Styrofoam. It is about what a space probe that goes into the Sun’s atmosphere discovers and what information is being gleaned from Hubble. We know, for example, that the universe was formed 13.8 billion years ago. It had a beginning. In 10 trillion years, it will have an end. The last star will be a Red Dwarf: a relatively small, dim star that will simply fade away, leaving a void. 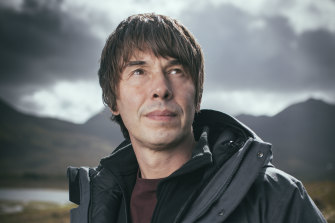 Professor Brian Cox on the Isle of Skye, Scotland.Credit:Freddie Claire

You can’t help but feel insignificant, squaring off against so much time and space. Our own lifespans – about 80 years, if we live in fortunate circumstances – seem so paltry by comparison. But, as always with Brian Cox, it’s all about how you look at things. “Ultimately, the series is about trying to encourage the audience to think about the meaning of those discoveries,” he says. “You won’t find meaning through the eyepiece of a telescope. But you are forced, when you see these things, to ask questions. What does it mean? What is my place? And it’s an ancient question, isn’t it? What does it mean to be me?“

Astronomy challenges our sense of ourselves, certainly. We are a long way from the anthropocentrism of our relatively recent belief that we lived on a flat Earth with the stars ranged prettily above us. Science told us we lived on a globe, then that this globe was not even the centre of the solar system, that a burning star was at the centre of things. Now we know that even our galaxy is only a bit player in the ever-expanding universe.

“Yes, science has been a continual series of demotions” says Cox cheerfully. “From the centre of the universe to what are we now – and we still are being demoted, you know, because every other year the conceptual universe seems to get bigger.” At the same time, he says, the fact that we can recognise this, even be upset about it, shows how significant we actually are. 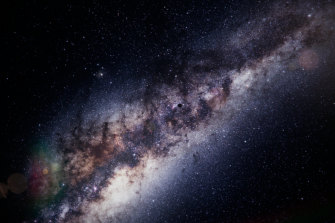 “We have discovered there are 2 trillion galaxies in the piece of the universe we can see”, says Brian Cox. “Two trillion, each one, give or take, the size of the Milky Way – so let’s say 100 billion, maybe a trillion stars in each one”.

“I argue – well, I think it’s self-evidently correct – that human beings are in a fundamental sense the way that the universe understands itself,” says Cox. “We are collections of atoms, as we say in the series, that were assembled in stars, and yet we’re able to think and explore the universe.” We can’t presume that there is life anywhere else, let alone some kind of civilisation. There may be, but the confluence of conditions needed to create life seems so random, it is astonishing it happened at all. Which makes us valuable, possibly uniquely so.

And confers a huge responsibility, because if we are the sole repository of conscious knowledge – if nothing else knows that black holes exist, given that black holes themselves don’t know anything – then that means we are not only, as Genesis would have it, the stewards of life on Earth. We’re also the recording angels of the universe.

“It’s brutal,” agrees Cox. “I think I say that in the series. If we destroy ourselves – and we nearly did that during the Cuban missile crisis; we’ve had a go and nuclear war is not off the table – we might eliminate meaning in the galaxy. That knowledge might reside nowhere else but here. So there’s a perspective. What if some idiot just presses the button?”

What we all need is a wider perspective. The current appetite for space travel among billionaires meets with a lot of eye-rolling – or anger – but you won’t get that sort of scepticism from Cox. “I would love to see the Earth from space,” he admits. “And I think that’s going to be quite transforming, when many people get the opportunity to do that. 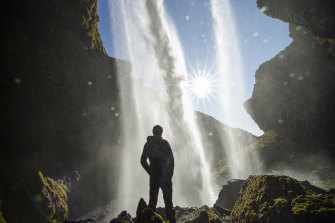 “We are collections of atoms, as we say in the series, that were assembled in stars – and yet we’re able to think and explore the universe.”Credit:Freddie Claire

“Because I’ve been lucky enough to have met many astronauts and I think I can say with certainty that all of them speak of the power of seeing the Earth from space. They don’t think in terms of conquering the universe or mastering nature. They speak of its fragility. They all seem to be humbled by the experience. I think when it becomes routine and when more people get up there, it will have a valuable impact on our culture. Because I’m sure that those astronauts, many of them having been test pilots, are not given to whimsical reflection.”

Again, it’s not so much about knowing what’s up there – crucial though that is – as about how we think about it. That’s why science matters. “It’s not knowing the facts, really,” says Cox. “I mean, someone has to know the facts. Someone has to be able to do these things: build phones, invent vaccines, those sorts of things. But, ultimately, we all play a role in ensuring that our civilisation extends and prospers and stays here. And if we lose the shared idea of facts, right, if we shy away from the implications of our discoveries, we run the risk of going backwards, essentially into the Dark Ages.”

So we have to keep thinking, he says; we owe it to the universe. “And somewhere under there is my conviction: that thinking in the way nature forces you to think is a valuable intellectual exercise, irrespective of what you are thinking about,” says Cox.