For one man, having anything other than washboard abs is not acceptable, and he claims that it’s thanks his own urine that he’s been able to maintain an enviable physique well into his fifties.

Troy Casey, 55 from Arixona, has been drinking his own urine and applying it to his skin for the last seventeen years – even doing week-long urine fasts and putting aged urine enemas in his rectum.

He credits his daily pee-drinking practice for his ripped physique.

Troy – who modelled for top fashion brands like Versace before becoming a Life Coach and Healer – says: ‘Urine therapy is an ancient practice – it just doesn’t get talked about a lot. Your own pee is full of amino acids, stem cells and antibodies.’ 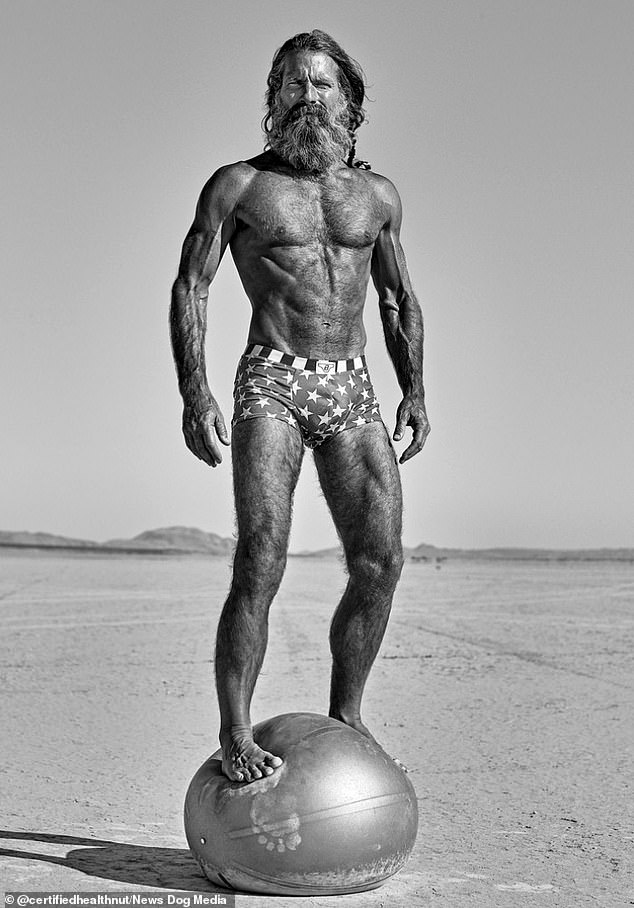 Troy Casey, 55, showing off his incredible physique which he credits to drinking his own urine every day 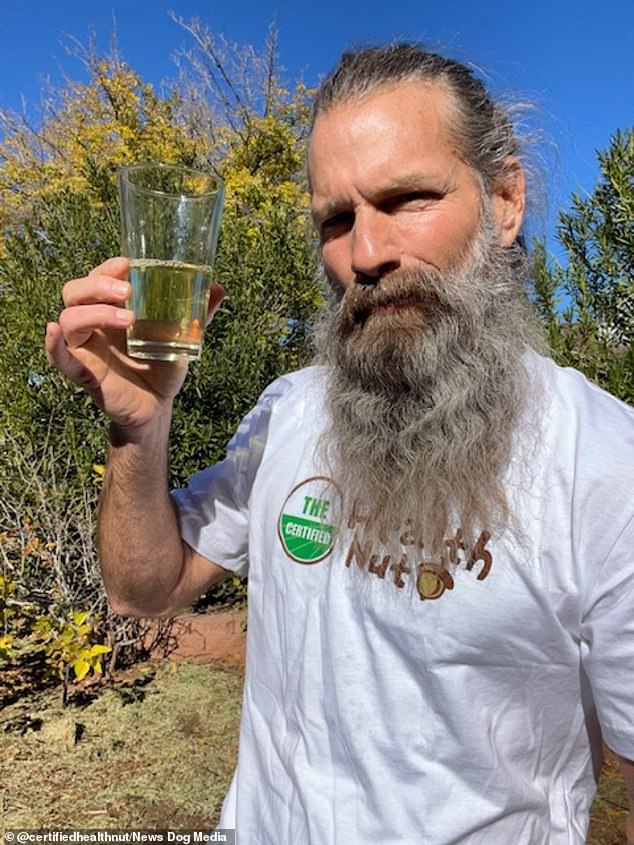 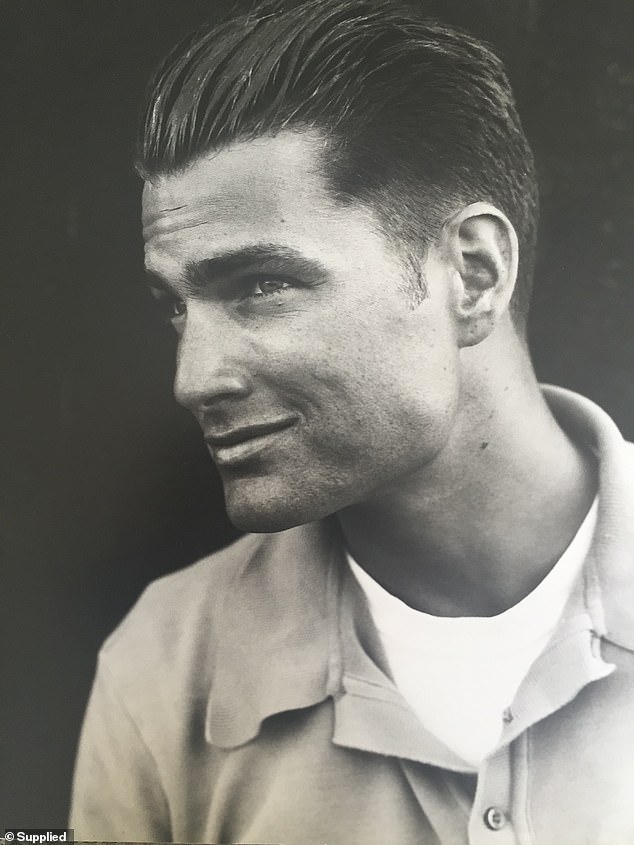 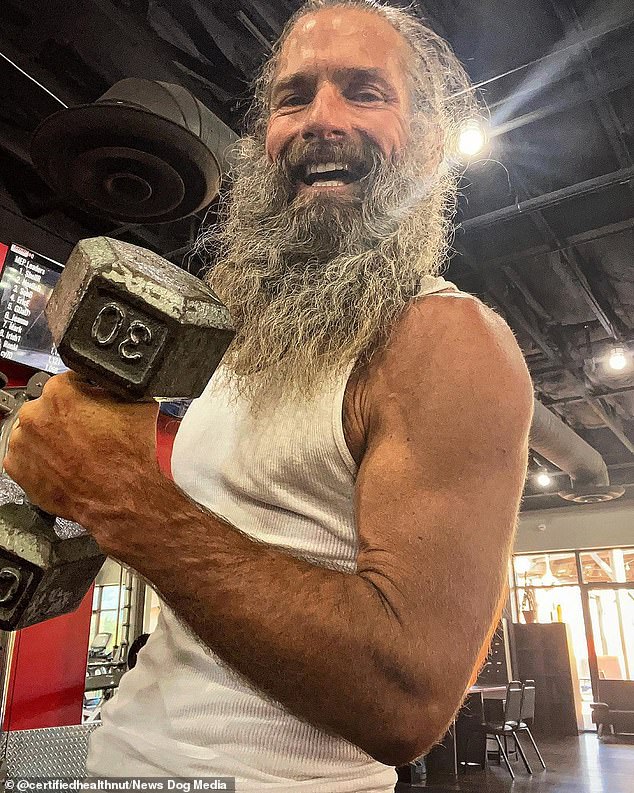 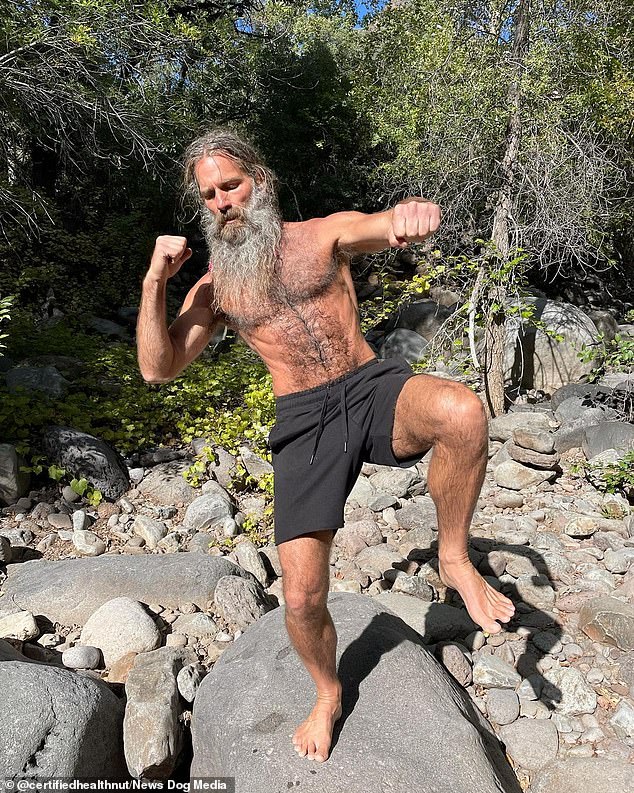 After living an unhealthy lifestyle in New York, the former model decided he wanted to get in shape

‘I drink my own urine every morning – I call it hair of the dog! The feeling is electric.’

‘Applying aged urine is the fountain of youth and aged urine enemas are one of the ways I got my stomach so flat.’

‘I’m fifty-five years old and most people don’t look and feel like I do at my age. No-one can deny that I’m ripped and that’s down to the fact that I love being extremely healthy and practising natural healing methods.’

‘People should be scared if they’re eating sh***y food and doing pharmaceutical drugs. Why should they be scared to try their own urine?’ 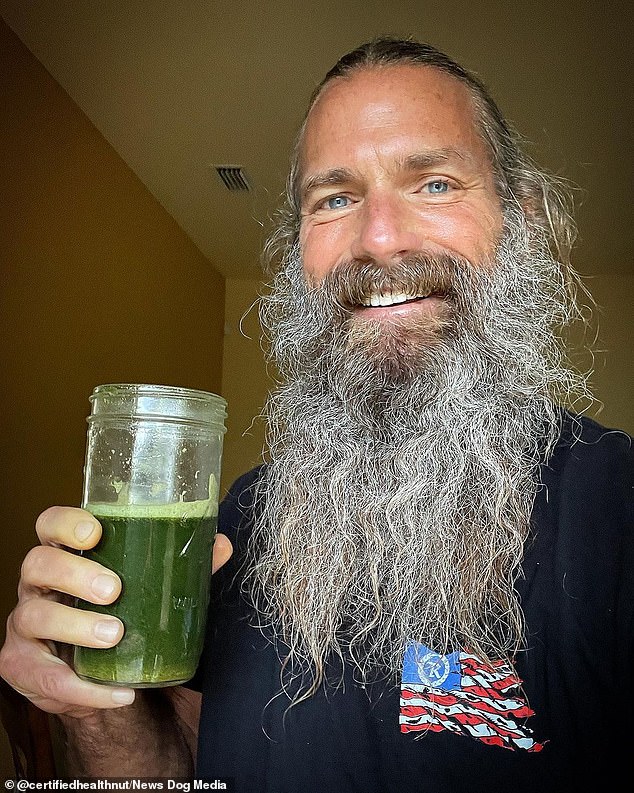 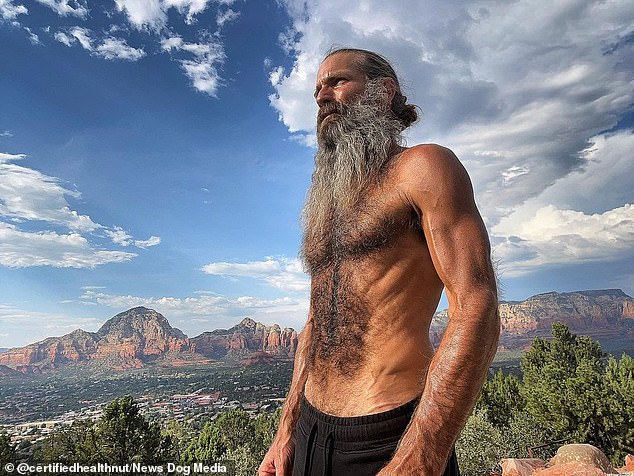 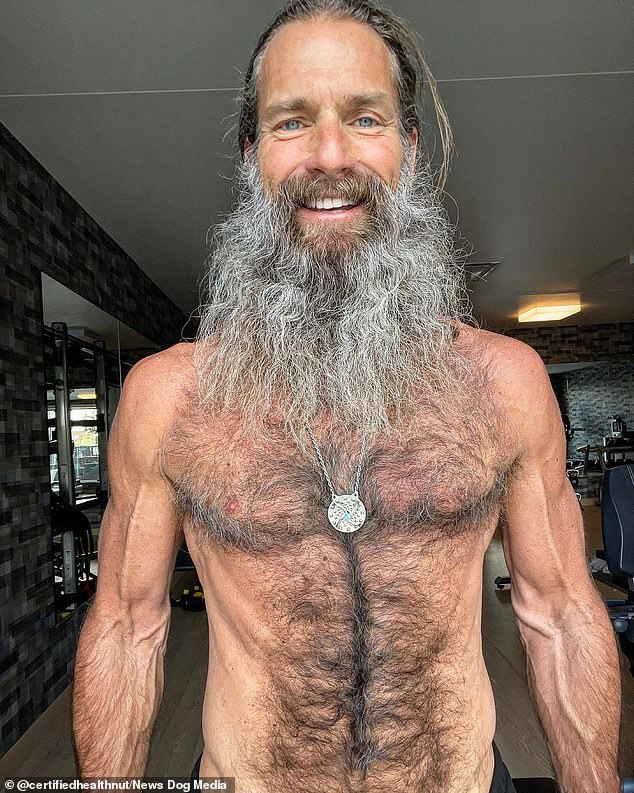 After his friend claimed to beat cancer with the help of urine therapy, Troy began exploring other ways to ingest his own pee

Troy, who has penned a book on the health secrets behind his good looks—Ripped at 50: A Journey to Self Love—says he wasn’t always so healthy.

He explains: ‘When I started modelling in my twenties, I was living the high life, partying in Milan, New York and London and not looking after myself. As a result, I would bloat and hold on to the extra water in my face and body.’

‘Sometimes I would be so bloated that casting agents would tell me not to go to Vogue or Armani shoot today. It began affecting my life and so I began reading up on nutrition and practising stuff like herbal medicine, fasting and eating real foods to combat it.’

‘Soon after, I started getting results when I looked in the mirror. I became hooked to learning about natural and ancient healing methods and truly understanding health.’ 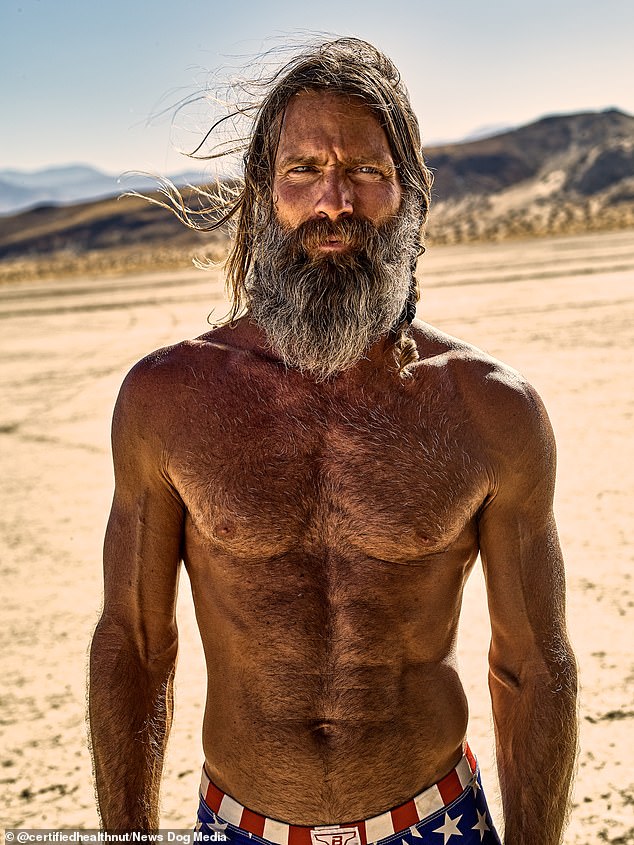 As well as drinking urine every morning, the former model also proritizes hydration, nutrition and sleep 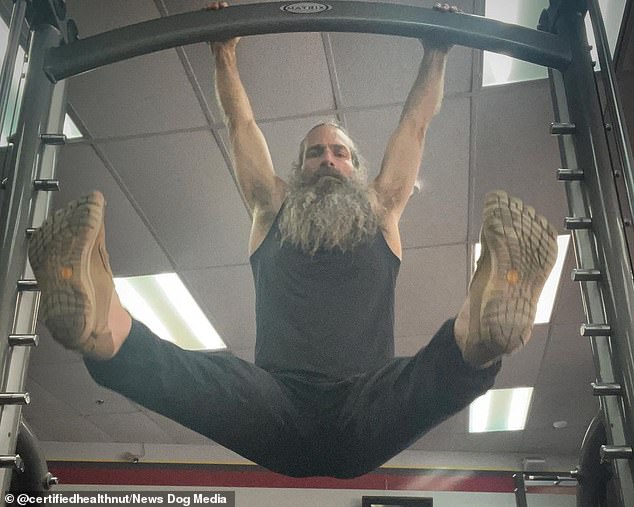 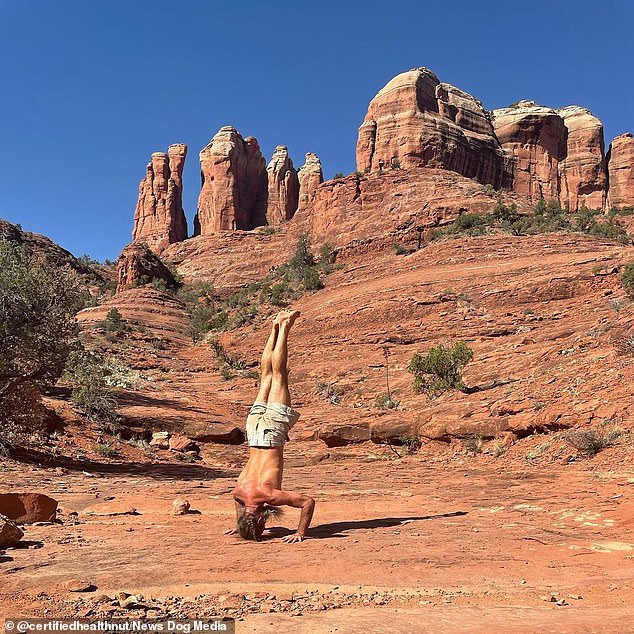 Troy says he became interested in urine therapy – also known as ‘Shivambu’ in Ayurvedic medicine – in 2004. He first drank his own pee when he couldn’t be bothered to stop for a toilet trip during a long car journey and the feeling of tasting his wee was ‘electric’.

Troy says: ‘I had read about the benefits of urine therapy in ancient Ayurverdic medicine and the information resonated it.’

‘The first time I tried my own urine, I was driving from San Francisco from Los Angeles. It’s a long five hour drive. I didn’t want to stop to take a leak so I peed in a cup and drank it and I was like hey that’s not so bad! Drinking my own urine, it wasn’t as bad as the mental barrier in my own mind.’

‘The electricity were so immediate and subtle – I felt a cool buzz. Intuitively, it just felt good. I drank my urine on and off for a while from there.’ 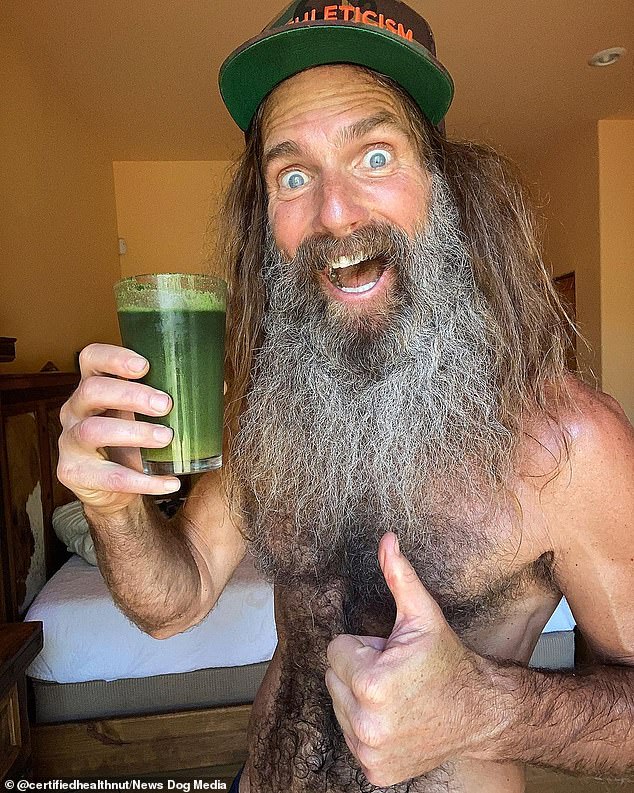 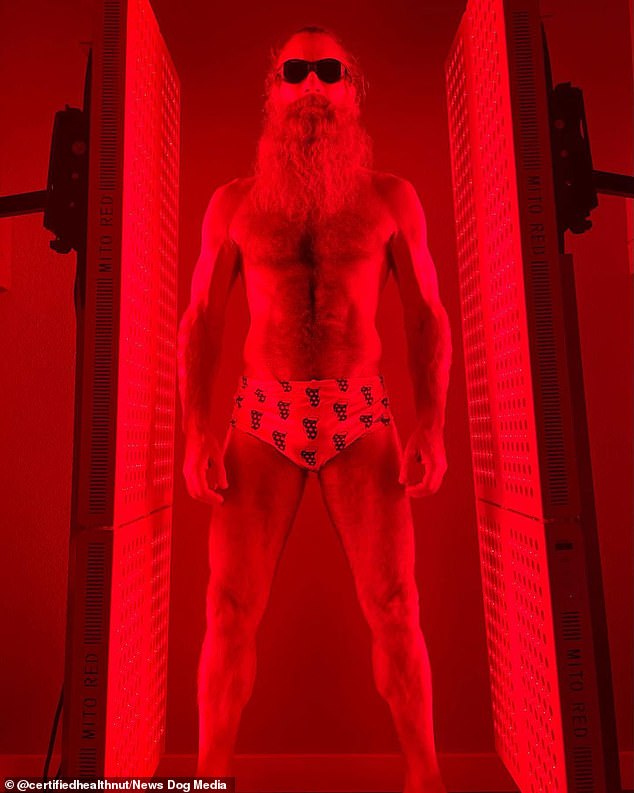 Troy during cryotherapy. The former model say people are impressed by his physique and energy at his age 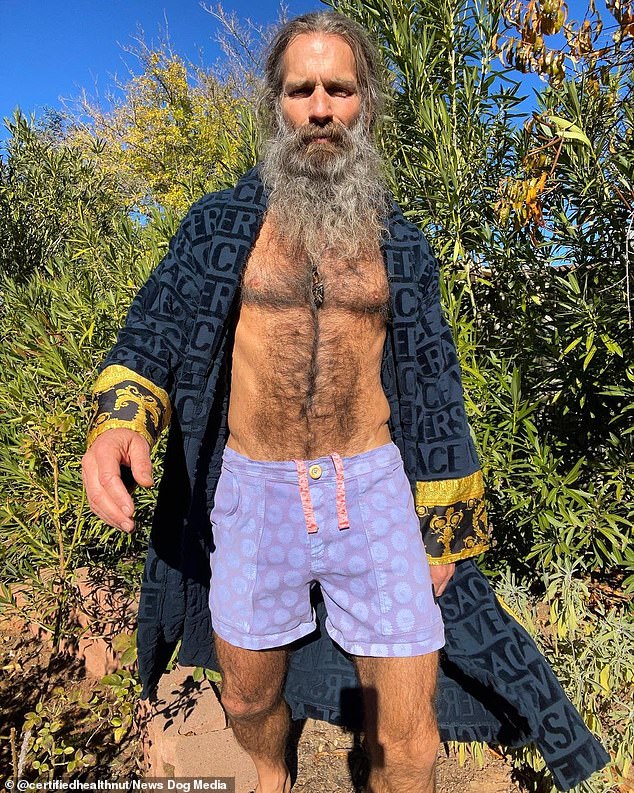 Troy – who has over 120,000 followers on Instagram – says he could easily survive and thrive on urine if it came to it 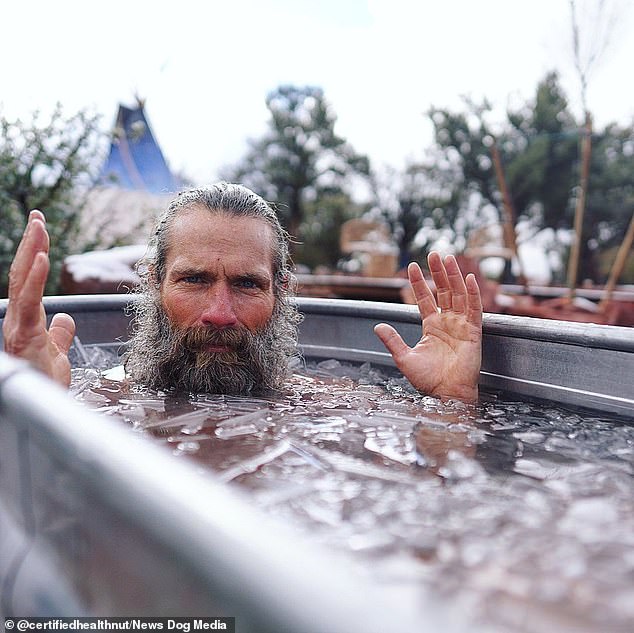 Troy in an icy bath, part of his health regime which also includes drinking his own urine every day

Urine therapy is said to date back to the Bible. Historical documents suggest that the Aztecs disinfected wounds with it, while the benefits are also mentioned in Indian and Chinese literature.

Fans of ‘urotherapy’, a term used to describe drinking your own pee, include Madonna.

In 1945, John W. Armstrong, a British naturopath, published a book claiming that drinking urine could cure all major illnesses, however there is no scientific proof of this.

Urine is highly sterile, consisting of 95 per cent water and five per cent nutrients such as proteins, vitamins and minerals. During the digestive process, the liver deals with toxins and removes them to be excreted.

The blood then goes to the kidneys where it is filtered again and extraneous components the body no longer needs are collected in a sterile solution which is then passed as urine.

But GP Dr Rob Hicks told the Mail: ‘Over the years many people have claimed health benefits from drinking their own urine, but as far as I’m aware there is no scientific evidence to back-up these claims.

‘The kidneys are an efficient filtering system getting rid of what the body doesn’t need, so to put this back into the body seems counter-productive.

‘Personally, I believe there are better – and more palatable – ways to keep the body healthy including not smoking, eating a healthy diet, and keeping stress under control.’

Health expert Aisling Pigott, dietician and spokesperson for the British Dietetic Association, added that urine contains toxins expelled from the body and kidneys, and drinking it could therefore be harmful and cause infection.

However after his friend claimed to beat cancer with the help of urine therapy, Troy began exploring other ways to ingest his own pee – doing week-long urine fasts, putting aged urine enemas in his rectum and applying his own wee topically.

Troy says the benefits to his health, skin and physique were astonishing.

He recalls: ‘My friend who beat testicular cancer with Shivambu challenged me to a seven-day urine fast where I just drank and looped my own urine for a week.’

‘From there, I got into aged urine enemas where I would cultivate my own urine and ferment it in a sealed mason jar for two weeks before transferring into my rectum.’ 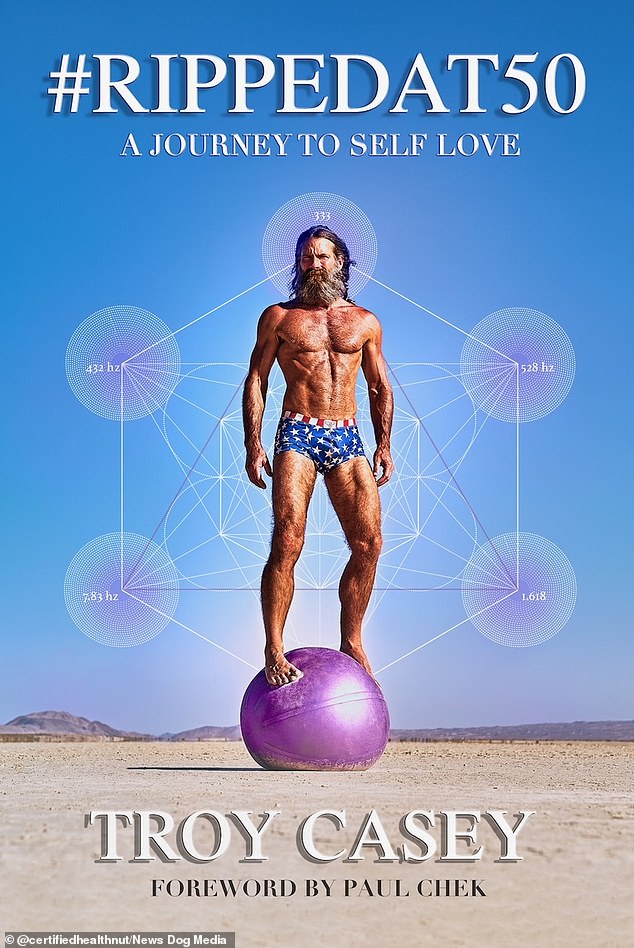 Troy, who has penned a book on the health secrets behind his good looks— Ripped at 50: A Journey to Self Love —says he wasn’t always so healthy 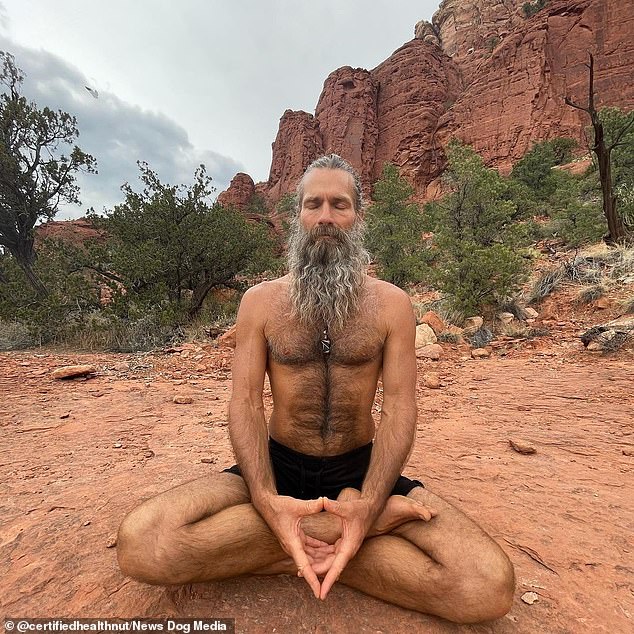 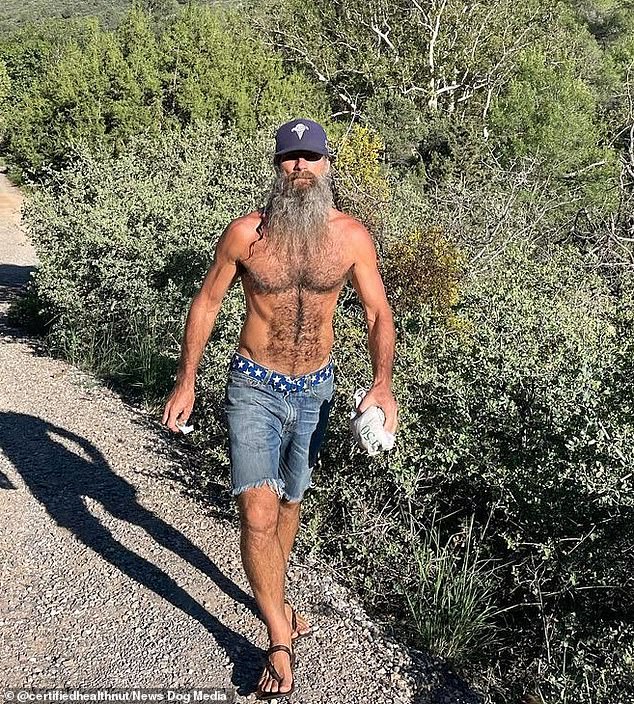 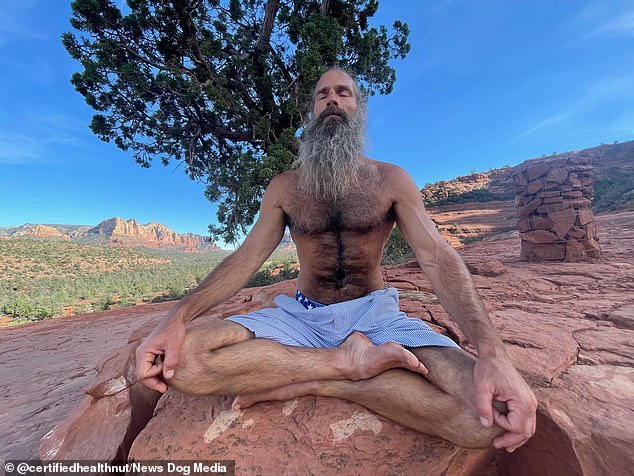 He first drank his own pee when he couldn’t be bothered to stop for a toilet trip during a long car journey and the feeling of tasting his wee was ‘electric’. Pictured: meditating

‘Aged urine enemas are so powerful for your health and I got my six pack abs after doing them. It flushed out my gut and that’s when I got really ripped.’

‘I also tried applying topical aged urine and what it did for my mood and muscle building was amazing. I put it on my skin especially when I’m on the beach and it’s so electrifying and strengthening.’

‘It’s a big psychological leap for people to use their own urine as a moisturiser but it’s so euphoric and anti-aging. Uric acid is used in high-end skincare products.’

Troy – who has over 120,000 followers on Instagram – says he could easily survive and thrive on urine if it came to it. 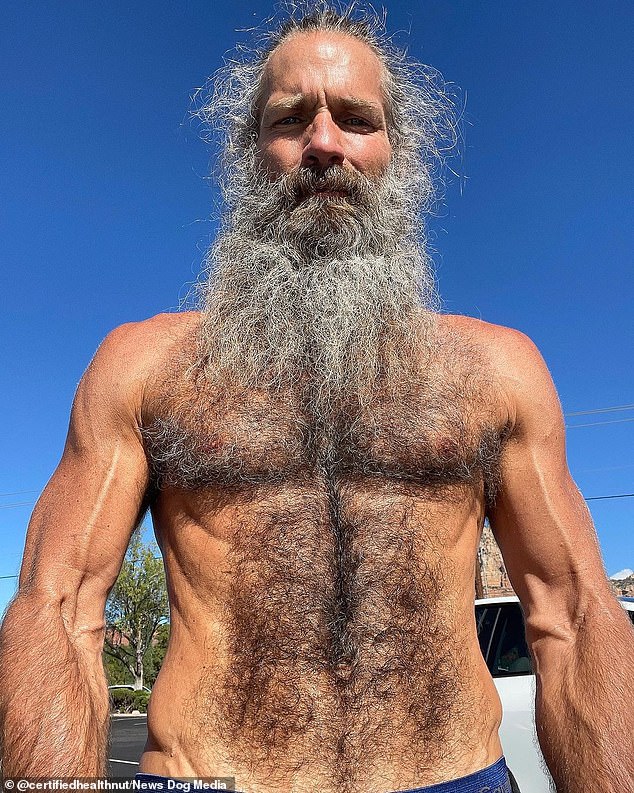 Troy thinks that if the apocalypse ever happens and we don’t have access to water, he’ll be fine as he has his own ‘water’ to drink 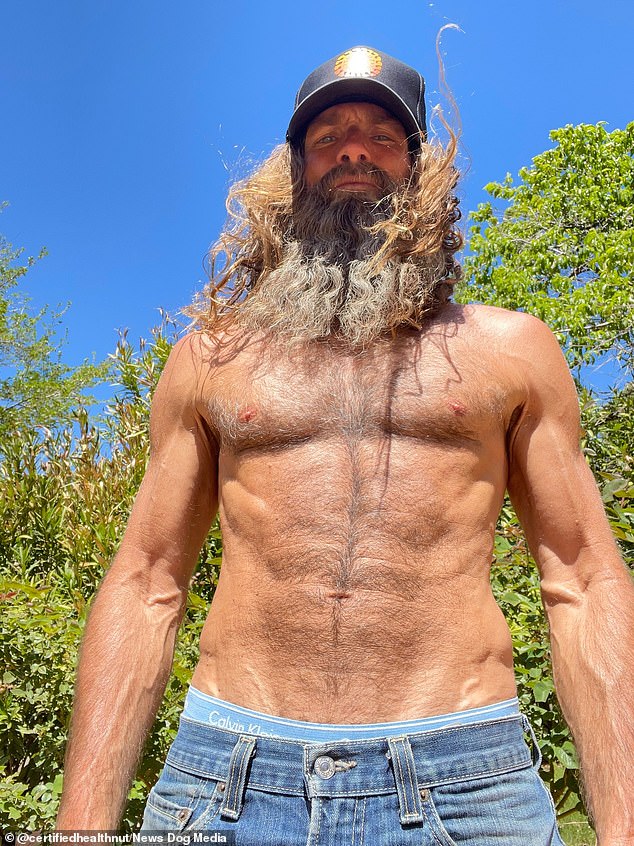 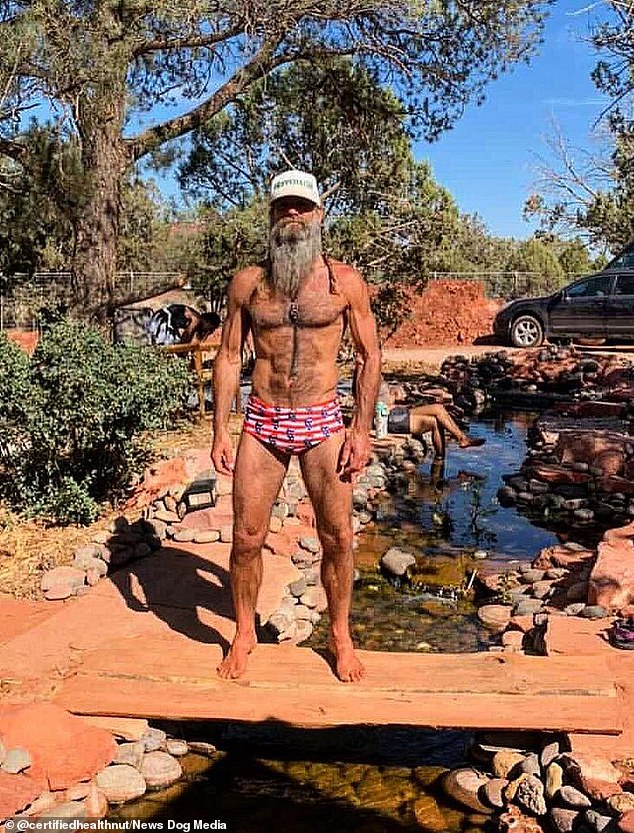 He explains: ‘For my health, drinking urine is there for me every morning. It’s in my arsenal – along with hydration, nutrition and sleep.’

‘If the apocalypse ever happens and we don’t have access to water anymore, I’ve got my urine! I got my own water to drink! I survived on my own pee before and it works.’

‘I’m fifty-five years old and look at my vitality, my skin, my body, my health. People are impressive by my physique and energy at my age.’

‘What so many pharmaceutical companies don’t want to tell you is that we as humans are the secret to health. That’s what I try to teach people in everything I do.’