Minions: The Rise of Gru was the biggest film in Australia over the weekend, taking $8.2 million at the box office and easily surpassing both Elvis and Top Gun. But if you were planning on taking your kids, you should be prepared for some very strange company.

Thanks to a TikTok trend that appears to be taking off around the world, groups of young people (most often teenage boys) have started attending screenings of the new animated film in their full Year 10 formal get-up. At its best, the trend is extremely weird and pretty funny. At its worst, it’s ruining screenings for other cinemagoers.

The rise of ‘gentleminions’

Short videos that have gone viral on the social media platform show these well-dressed groups eerily filing into cinemas, watching the film in stony-faced appreciation and/or erupting into applause.

Some videos also show teens getting kicked out after becoming too rowdy and throwing bananas (the Minions’ favourite fruit) at the screen. And this has resulted in a few venues overseas reportedly instituting an outright ban of specific attendees.

One small cinema in the UK tweeted over the weekend, “We are currently not admitting unaccompanied children wearing suits for Minions: The Rise of Gru.”

Universal Pictures, the production company behind the franchise, is taking a lighter approach, recently posting a message of support on Twitter: “To everyone showing up to Minions in suits: we see you and we love you.”

The official Minions TikTok account has also embraced the practice, reposting one of the viral videos with the caption “Bobspeed you gentleminions”.

The Age and The Sydney Morning Herald have approached some of Australia’s major cinema chains for their official policies on unaccompanied children in suits, but have not yet received comment.

Judging by the videos circulating on social media (from both Minions fans and frustrated cinema employees), though, it’s fair to say the trend is taking off here too.

But… why is this happening?

The simple answer is: it’s currently school holidays, and teens have more time to do things that deliberately confuse and lightly annoy the adults in their immediate vicinity.

But young people’s bizarre engagement with this film isn’t totally out of the blue either. Since first appearing in Despicable Me back in 2010, Minions have become a huge cultural phenomenon which people either love, hate, or love to hate.

They’ve also developed a life of their own on the internet. The emoji-like characters first became popular with older people sharing earnest memes on Facebook, and have since been ironically co-opted by millennials and Gen Z to produce content that’s often dark and almost always nonsensical.

With the release of a new Minions movie, this online fandom has spilled into real life and kids are getting dressed up in their fanciest gear to ironically honour an increasingly ridiculous phenomenon.

And it’s no coincidence that Universal Pictures is leaning in to the chaos. Though Minions: The Rise of Gru is primarily a kids’ film, it has also been actively marketed towards an older demographic.

The official TikTok account for the film has a bunch of content with the same ironic sense of humour – one video giving a specific shoutout to “2010s kids” that would have grown up with the franchise – and the movie’s soundtrack is helmed by producer Jack Antonoff, who is famous for working with young superstars like Taylor Swift and Lorde. 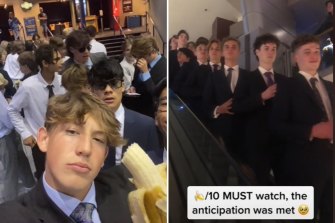 Teens in suits are taking over TikTok, and it’s all in the name of the new Minions movie.Credit:lyndon.c/TikTok; bill.hirst/TikTok

Antonoff’s soundtrack, which he announced on Instagram in the style of a festival lineup, features ’70s covers from popular acts including Phoebe Bridgers, Tame Impala and Thundercat.

This is helping put the film on zoomers’ cultural radar – and it’s all translating to serious success at the box office.

At the time of writing, Minions: The Rise of Gru has clocked up $296 million in global takings and is on track to smash the record for the biggest fourth of July holiday weekend debut in the US.

Of course, it’s not all kids in suits – Despicable Me is the most successful animated film franchise in the world. But their ticket purchases, however ironic, don’t hurt either.

In need of some good news? The Greater Good newsletter delivers stories to your inbox to brighten your outlook. Sign up here.