Down a side street in Collingwood a discreet door opens onto Sense of Self where people come to bathe in the mineral pool, dip into the cold plunge, have a massage or sweat in the sauna and steam room.

Unlike traditional onsens in Japan or hammans in Turkey the bathhouse is mixed gender, so men and women wander around in their bathers and robes enjoying a respite from Melbourne’s wintry weather. Sometimes the bathers are optional. 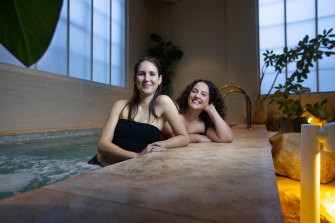 Freya Berwick and Mary Minas, owners of Sense of Self bathhouseCredit:Simon Schluter

Co-owner Mary Minas says the idea for the bathhouse came from a love of bathing and a desire to connect people with their bodies.

“It’s about a realisation that your body is just one on a spectrum of bodies,” she says.

Minas and co-owner Freya Berwick started selling memberships to the bathhouse as soon as they signed the lease on the building in Collingwood and signed up 150 members and say they had “thousands” on a waiting list before construction began.

Since opening in March last year, the bathhouse has been busy, with massage appointments booked out for up to five months. 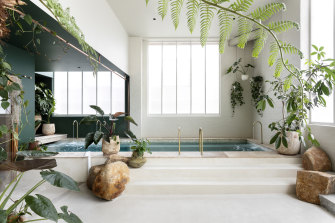 Inside the Sense of Self bathhouse.

Berwick says this is partially because of the popularity of the bathhouse but also a result of staffing shortages and a backlog of bookings after the pandemic.

Bathhouses are not a new phenomenon in Melbourne. Turkish baths were part of the design of the Melbourne City Baths in 1903.

Japanese onsen Ofuroya has been operating in Collingwood since 1999 but Sense of Self and Comma which opened in Richmond in December 2020 offer a new take on an ancient pastime.

Susie McIntosh, owner of Comma, said she wanted to create a place where people could opt out temporarily from their modern, busy life.

“We’re not trying to reinvent the wheel or anything, but we’re just trying to create a place that’s really welcoming and relaxing,” she said.

“If you can take an hour out of your day and sweat and sit and stay off your phone and immerse yourself in cold water and plunge you just feel incredible and then you can just go about your day.”

Comma also has a booking backlog and warns on its website that massages are “quite heavily booked”.

Both the owners of Sense of Self and Comma say the bathhouses’ emphasis on body positivity has helped attract a broad range of customers.

“It doesn’t matter who you are, where you come from, or what you look like or what shape or size you are,” McIntosh says. “Literally this is an experience absolutely anyone can enjoy.”

In many cultures attendees at bathing houses are nude, but at both Sense of Self and Comma bathers wear their swimsuits although Sense of Self has introduced “bathers-optional” sessions at certain times of the week.

Jess Trevaskis booked in the bathers-optional session by accident as the only booking time that suited but she says after walking in, feeling “strange and aware of being naked” only lasted for a couple of minutes.

“There really was every age and body type there and I think the all-age aspect meant you weren’t thinking that people were looking at your body and judging you,” she says.