Her swan song! After it was announced that Kate McKinnon would depart Saturday Night Live after 10 years, her final cold open sketch brought plenty of nostalgia and emotions.

The Saturday, May 21, episode — which also saw the season 47 departure of Pete Davidson, Aidy Bryant and Kyle Mooney — kicked off with the Tiger King star, 38, reprising her fan-favorite character of Miss Rafferty. Rafferty was an alien abductee with an admittedly difficult experience in relation to those of her peers.

In Saturday’s opening sketch, McKinnon’s character (alongside episode host Natasha Lyonne and Cecily Strong) were questioned by two government agents at the Pentagon — played by the Shrill alum, 38, and Mikey Day — about their experiences. After she vividly detailed her albeit-raunchy third extraterrestrial encounter, Bryant and Day reveal that one of the abductees must return to the alien spaceship “permanently” in exchange for crucial intel about their technologies. McKinnon’s Rafferty volunteered as tribute for the gig. 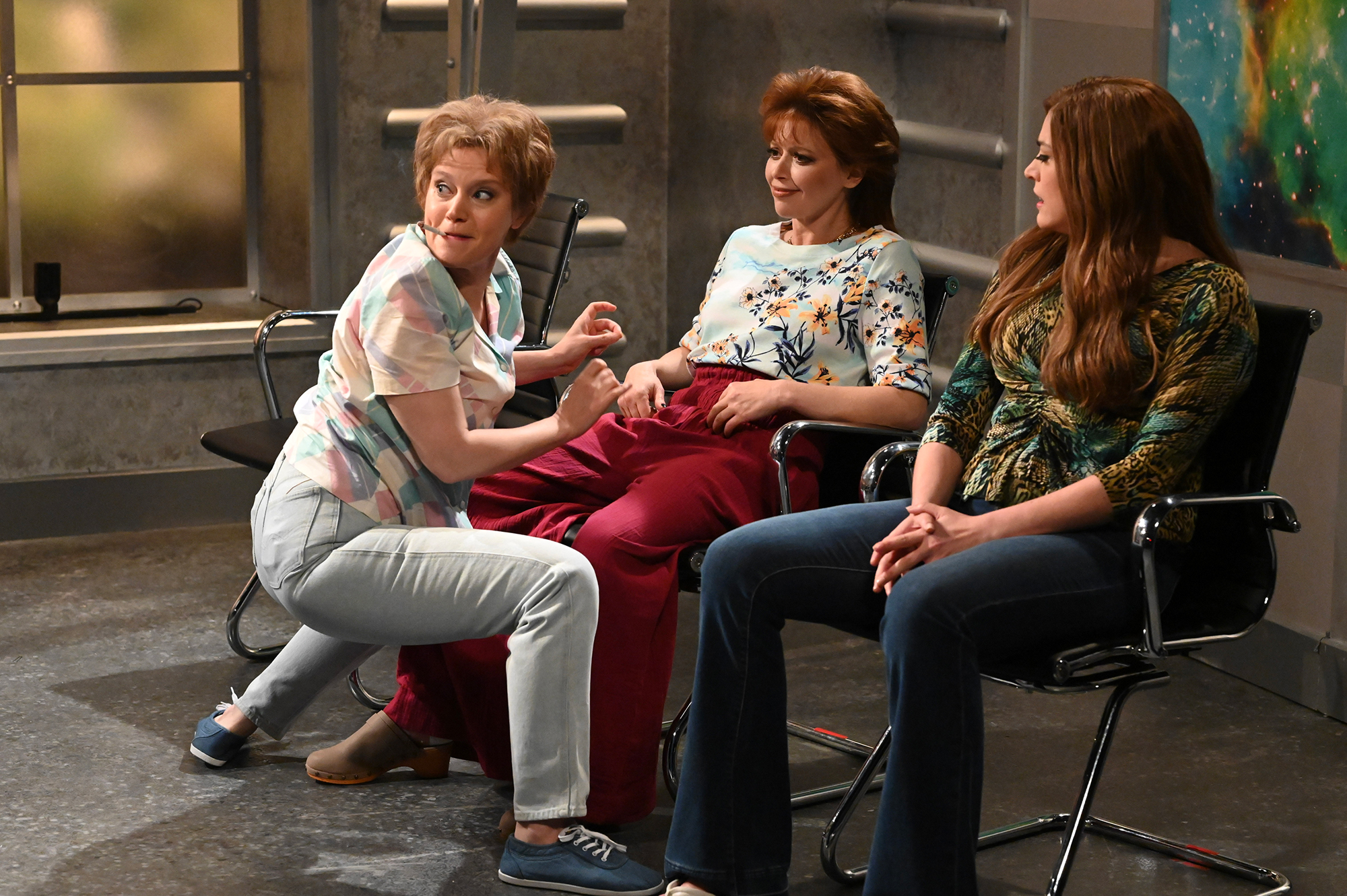 “I can read the room — it’s me, right?” the Rough Night star quipped on Saturday. “Sure, why not. I kind of felt like an alien on this planet anyway.”

McKinnon, walking toward the “spaceship,” spun back around to marvel at the SNL audience once more and placed her hand over her heart. She added, breaking down in tears: “Well, Earth, I love you, thanks for letting me stay awhile. Live from New York, it’s Saturday night!”

Kristen Wiig, Kate McKinnon and More of the Funniest Women in Hollywood

The New York native, who joined the NBC variety series in 2012, is known on the show for uncanny celebrity impressions and unique characters, including Rafferty, Ellen DeGeneres and the late Ruth Bader Ginsburg. 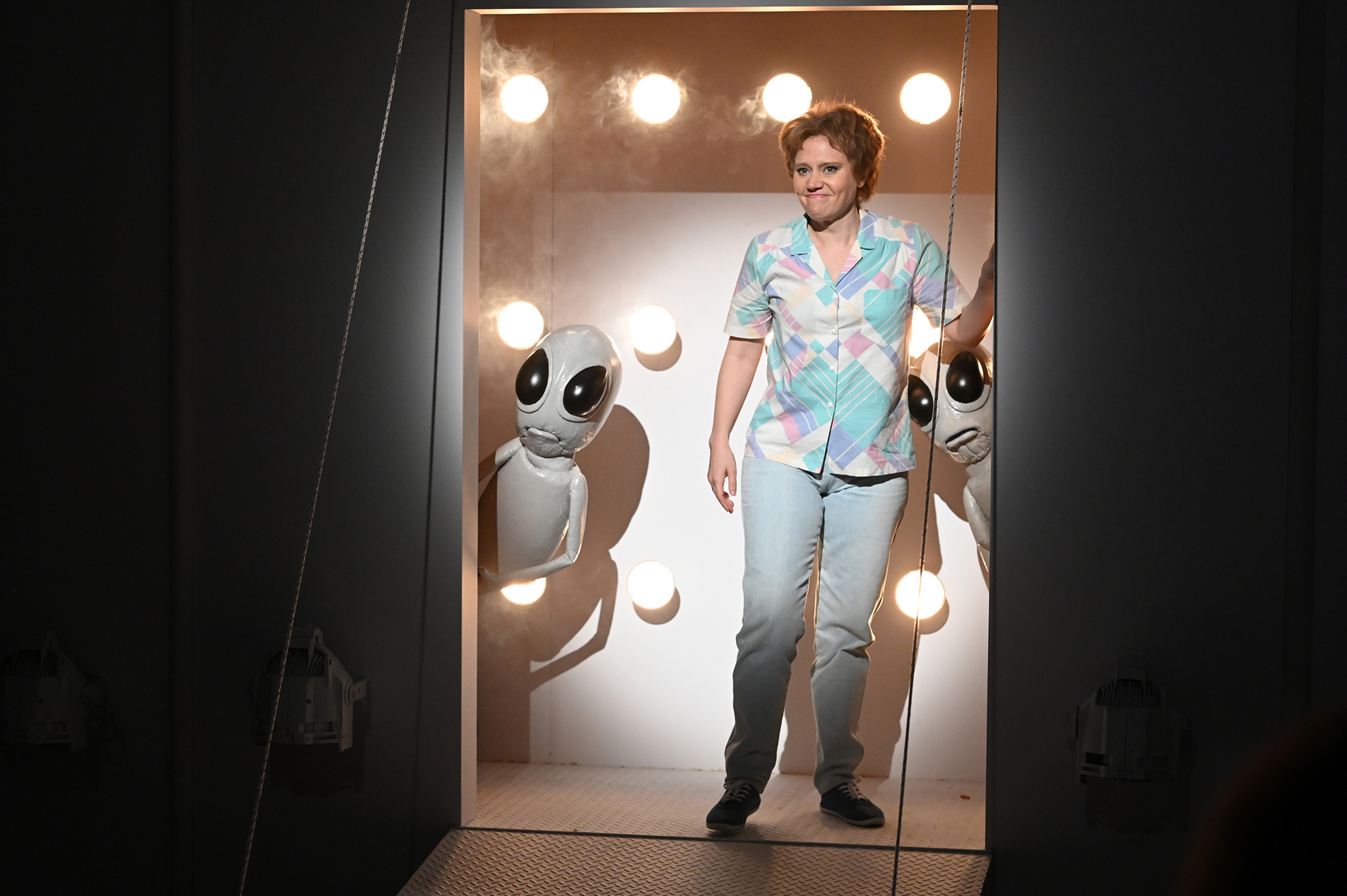 “Of all the seasons I worked on Saturday Night Live, [season 46] may have been my favorite because it helped me to feel less alone,” she told Variety last year of the mid-pandemic season. “I felt a sense of communion with the audience in the studio and the audience at home. [Being able to] share in the ludicrousness and pain of what we were all going through made my year bearable. If I hadn’t been able to commune with people through a TV screen this year, I really would have been in bad shape.”

After 10 years on the show, McKinnon was notably absent from the beginning of season 47 amid other work commitments, which soon spawned exit speculation.

“People can kind of come and go,” show alum Ana Gasteyer exclusively told Us Weekly in November 2021, noting at the time that neither she nor Rachel Dratch knew if the rumors were true. “And so, I don’t see any reason why someone like Kate would leave unless she had something else she wanted to go do, because if you can kind of hop in and out, that’s the ideal reality.”

For more, watch the cold open clip above!