MAILONLINE LIVE BLOG: Follow all the latest royal updates as the final episodes of Harry and Meghan’s Netflix documentary are released.

The Daily Mail’s royal editor Rebecca English has slammed Prince Harry and Meghan Markle over allegations that members of the royal household ‘leaked’ stories about the Duchess of Sussex to the press in order to get rid of stories about other family members.

Harry’s frankly rude and unprofessional behaviour towards the Press was also never reflected in my copy. The impressive charity work he was doing deserved to be the star of the show.

In fact I have always had great sympathy with the prince’s historic hostility to the media in general and wanted to try improve relations.

When, for example, Harry fell off his polo pony during match and appeared to have a very un-regal tantrum on the field, it was me who approached his team to say that it was clear something else was wrong and would it not be helpful to explain what, so that the incident wasn’t presented in a negative light.

This was quite a daring move, I have to say, in the normally rather formal relations between palace and Press.

My request resulted in Harry ringing me from the airport in Barbados on an aide’s phone to say that yes, he had been bet a significant amount of money for his charity, Sentebale, not to fall off and he was upset and frustrated at losing them that much-needed money.

Before the release of this morning’s Netflix episodes, watch MailOnline examining the most controversial claims made by the couple from the first installment.

There are just 30 minutes until episodes four to six of the Sussex’s Netflix series are available to watch.

The first three episodes saw huge viewing figures in the UK and across the world.

It is not thought the royal family will be watching the series, although their aides are said to be on the lookout for any bombshells.

MailOnline will bring you all the latest lines when the episodes come out.

According to trailers ahead of this morning’s release, the royal household has been accused of deliberately planting negative stories about the Duke and Duchess of Sussex to deflect from less favourable coverage of other royals as part of ‘a war against Meghan’.

In the latest trailer for the Sussexes’ controversial Netflix documentary, the duchess’ lawyer Jenny Afia alleges she has seen evidence of briefing from the Palace against the couple, while Meghan’s friend Lucy Fraser says the duchess became a ‘scapegoat for the Palace’.

The duchess also appears in the teaser, ahead of the release of the final three episodes on Thursday, saying: ‘You would just see it play out, like a story about someone in the family would pop up for a minute and they’d go “We’ve got to make that go away”.’

As Meghan spoke, footage was played of newspaper front pages with the headlines Meghan Made Kate Cry and Heir Heads – about Kate and Meghan’s flower dress dispute and the Sussexes’ use of private planes – along with others saying Meghan: I Won’t Parade With Baby and Celeb BB Royal ‘Race’ Row. 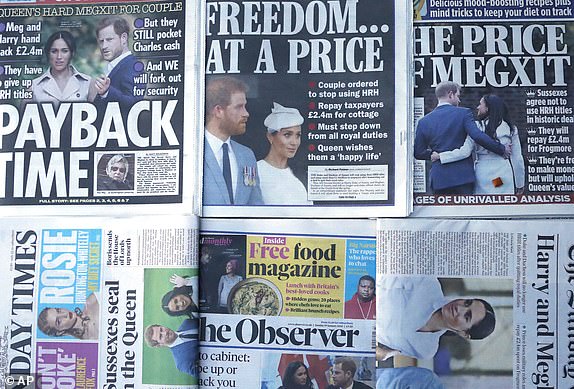 All the royal bombshells Prince Harry and Meghan could drop

Even before the couple quit the royal family in favor of a life here in the US, there were several hot-button moments that could present the perfect opportunity for the pair to ‘share their side of the story’.

From Meghan’s decision to break royal protocol during the birth of her first child, Archie, to the Sussexes’ recent allegations that palace insiders ‘leaked’ and ‘made up’ negative stories about them to protect other members of the Monarchy, there is no shortage of controversy set to be covered in the upcoming episodes.

Then, of course, there is the couple’s explosive March 2021 interview with Oprah Winfrey – during which they made several very damaging allegations about the royal family, the most sensational of which saw them accuse an unnamed senior royal of making racist comments about their son’s skin tone.

Will the couple finally reveal the name of that royal? Will they share ‘their side’ of the rift between themselves and the Prince and Princess of Wales?

Meghan Markle was last night accused of ‘peddling conspiracy theories’ by suggesting comments made by Ann Widdecombe in the Celebrity Big Brother house were part of a plot to turn her into a ‘scapegoat’.

Former Tory MP Ms Widdecombe, 75, was dragged into the furore after the latest trailer for Meghan and Harry’s Netflix documentary suggested Palace aides ‘fed’ negative stories about the couple to the media as a ‘distraction’ technique.

In yesterday’s teaser clip, the Duchess of Sussex, 41, and her allies claimed there was a ‘war against Meghan’ that saw people briefed to tell unfavourable stories about her and the Duke, 38, in a bid to make damaging tales about other royals ‘go away’.

Alongside the visuals appears a newspaper article on how Ms Widdecombe branded the Duchess ‘trouble’ during her stint on Big Brother in 2018.

However the ex-politician said last night that Meghan is ‘paranoid’ if she believes she had been ‘briefed’ to make the comment.

The second half of Harry and Meghan’s Netflix documentary is thought to focus on the breakdown of relations between the Sussexes and the rest of the royal family.

The last three episodes look set to explore the Megxit crisis, when Harry and Meghan stepped down from royal life to move to the US.

In trailers for today’s release, Prince Harry is heard saying: ‘There was no other option at this point…I said “we need to get outta here”.’ 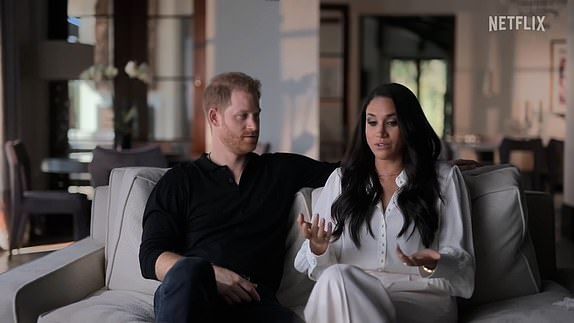 Final three episodes to air at 8am TODAY

The final three episodes of Harry and Meghan’s bombshell Netflix docuseries will air this morning with the Royal family bracing for fresh accusations of ‘leaked stories’.

A trailer released by Netflix showed the couple making claims that the Palace briefed against the Sussexes to deflect attention from less favourable coverage of other royals.

The Royal family and Palace aides will be bracing themselves for ‘truthbombs’ in the second installment, released at 8am GMT, with The Firm facing accusations it leaked negative stories as part of a ‘war against Meghan’.

Meghan’s lawyer Jenny Afia, in a trailer released on Wednesday, alleged she had seen evidence of briefing from the Palace against the couple to suit other people’s agenda.

Despite Buckingham Palace’s determination not to comment on Netflix’s Sussexes saga, courtiers have been assigned to watch the documentaries and produce a list of potential rebuttals as well as inaccuracies.

These are, apparently, to be cross-checked for howlers and given the once-over by royal lawyers before being locked in a drawer ready to be produced should the need ever arise.

A source says the Palace may be giving the impression of insouciance right now but is stockpiling ammunition just in case it needs to stop the Sussex bandwagon in its tracks.

Netflix documentary series about Prince Harry and his wife Meghan racked up more viewing time on the streaming service than any other documentary during its first week, the company said on Tuesday.

The first three episodes of Harry and Meghan recorded 81.55 million viewing hours after its debut last Thursday, Netflix said in a statement. More than 28 million households watched at least part of the series.

Large viewing figures are also expected for this week’s episodes. 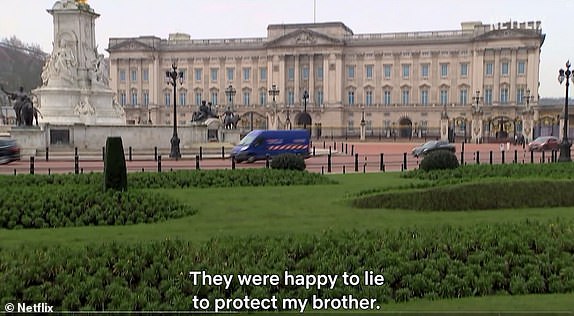 Netflix has released a series of trailers ahead of this morning’s episodes, and they look to be far more specific than the first three.

While last week’s episodes saw multiple veiled jibes towards the royals, it is feared this week will see individual family members named by the Sussexes.

Royal experts have predicted that today’s Netflix episodes will constitute a form of ‘revenge’ on the royal family by the Duke and Duchess of Sussex.

Multiple trailers released ahead of the release at 8am this morning have suggested today’s episodes will see a series of attacks on members of the royal family and the press – but the exact content is unknown.

This includes the claim that Meghan was ‘fed to the wolves’ by the family, who allegedly leaked stories about her to the press.

Royal commentator Richard Fitzwilliams said: ‘The question is, to benefit which royals and who knew about it? Which other members of the royal family were involved or were courtiers briefing without their knowledge?

‘William was named in an earlier trailer by Harry. This will be catastrophic for the relationship between the once close brothers.’

Good morning – and welcome to our live coverage on everything royal ahead of the release of the final three episodes of Harry and Meghan’s Netflix documentary later this morning.

Follow along for the latest stories, pictures, videos and analysis from our team throughout the day.