Celebrated Australian novelist Helen Garner says it would have been "pathetic" to omit from her published diaries the fact she has climbed Uluru.

The award-winning writer's latest offering, Yellow Notebook, hits bookstores this week on the eve of her 77th birthday. The collection is a "stream of fragments" lifted directly from her journal entries between 1978 and 1987.

Garner says she didn't censor a single word, no matter how embarrassed she was of her younger self's thoughts and actions. 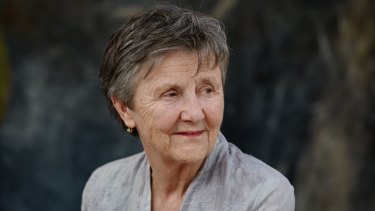 Helen Garner’s new book, Yellow Notebook, is a “stream of fragments” from her diaries from 1978 to 1987.Credit:Darren Jones

Two-thirds of the way through the book, she describes the time she climbed Uluru in the mid-1980s.

"I climbed the rock at dawn with a London barrister," she wrote. "You can't write about this stuff. I met my Mighty Force on top of the rock and it played with me."

Garner says she's embarrassed she didn't know more about the push to stop people climbing Uluru three decades ago and agrees with the recent climbing ban. At the same time, she counts the climb as one of her "most wonderful" memories.

"It was such a powerful experience," she says. "It's beyond my powers of articulation. But when I go back and read [about] it now, naturally I read it through the lens of the fact the rock is now closed. I completely understand and sympathise with the Indigenous position on this.

"When I was typing up the manuscript and came to the account of that … I could have left it out. I thought, oh, there's going to be some people on the internet who will get in here and snipe, 'Oh, look at this, she climbed the rock – how outrageous.' But it was a different period of history. And I did it. To pretend I didn't or to cover it up would just be pathetic."

Garner says there's something ironic about finally releasing a decade's worth of diary entries given her detractors often accuse her of spinning her personal life into award-winning prose.

Her debut novel, Monkey Grip, first published in 1977, divided critics as a result of its realistic portrayal of drug addiction. The book is now an Australian classic.

Garner describes compiling her journal entries as a "traumatic processes".

"You see your own naivety and ignorance of the world," she says. "You see your own fantasies and hopes and your own self-hatred, to some extent. I think everybody should run themselves through what they call in Alcoholics Anonymous a 'rigorous and moral inventory' whenever possible.

"It's not weird to look back but it's sometimes very, very uncomfortable. There's no voice-over to excuse yourself for what you did in those days. You've just go to wear what's there."

Garner stresses the only changes to Yellow Notebook prior to publication were the addition of several pseudonyms and edits for concision. Otherwise, everything is presented to the reader: menstruation, divorce, snarky remarks and even Garner attending an Alcoholics Anonymous meeting.

"I didn't censor," she says. "Naturally, it's edited because there's an enormous amount of procedural stuff like, 'I went to the supermarket' or 'I bought myself this or that.' That's not very interesting. So I've done a lot of cutting. But I actually haven't rewritten things. Some people will pick up the book and cringe because something I did or said will painfully remind them of something they did or said.

"I'm talking particularly about people my age, people who lived through the same era. We had what we thought were liberating ideas – but it led to a lot of unhappiness and destruction. Occasionally you see those ideas being revealed or played out."