The Australian Medical Association has questioned why Stan would acquire a documentary espousing the benefits of drinking urine, sparking a debate around whether streaming services have a role to play in combating conspiracy theories and questionable health advice.

Urine Aid, available on the Nine-owned subscription broadcaster, is a 2017 documentary exploring the concept of "urine therapy". It features interviews with naturopaths and individuals who claim drinking urine can alleviate a raft of conditions, including ulcers and arthritis. 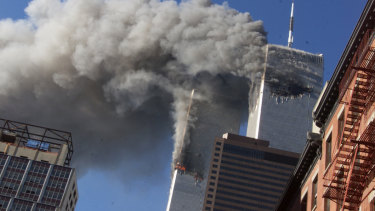 More than 2000 people were murdered during the September 11, 2001 terrorist attacks in the United States, including 10 Australians.Credit:AP

Dr David Smith, a senior lecturer at the University of Sydney's United States Studies Centre, said Loose Change was a "notorious" documentary that has been around for a long time. He added that most of its claims have been debunked.

"It's irresponsible for [Stan] to have it, but you can see from a commercial perspective why they do," he said. "The people who made Loose Change weren't looking to make money out of it. They were looking to get a conspiracy theory out there. The first version was available for free on the internet and 1000 DVDs were given away. The licensing for it is very cheap."

Stan isn't the only streaming service to raise eyebrows after acquiring controversial documentaries. Netflix came under fire last year over a program narrated by celebrity chef Pete Evans that made controversial claims about the benefits of high-fat, low-carb diets.

One Australian media executive, who did not wish to be named, admitted that content that potentially spreads misinformation is an issue for all streaming services as they attempt to flesh-out their catalogues.

"It's the provocative that draws attention," he said. "But there must be some filter that comes into play. It's a duty of care question. It's complicated because many documentaries don't have the counter view."

If a television network were to broadcast questionable material, they could face disciplinary action from the media watchdog, the Australian Communications and Media Authority.

"They could air it, but there would be complaints, definitely. They would not get away without consequences," he said.

Dr Lidberg said the reason for the lack of regulation on streaming services was they do not have to answer to statutory regulations under the Broadcasting Services Act, although there are discussions to include them under that umbrella going forward.

"This should have really high priority," Dr Lidberg said. "We had an opportunity in 2012 with the Finkelstein inquiry where this could have been addressed, and we would have had a one-stop media regulation shop, including streaming services.

"In the meantime, we have this limbo where streaming services can get away with really serious stuff."

The Morrison government is yet to respond to the Australian Competition and Consumer Commission's digital platforms inquiry, but says it is investigating how to level the regulatory playing field between free-to-air broadcasters and streaming services.

Nine is the owner of this masthead.