An unknown "soapy substance" combined with warm weather and low water levels is believed to be behind the death of scores of fish in a creek in Melbourne's south-east.

Melbourne Water said it has removed about 40 dead carp from the duck pond in Gardiners Creek at Malvern East after community members alerted the Environment Protection Authority to the deaths.

"Did someone dump chemicals in the waterway while they think everyone is in lockdown?"

"Large numbers of dead carp (over 50) and eels in the duck pond of Gardiners Creek at Dorothy Laver Reserve. Some alive struggling to breathe. 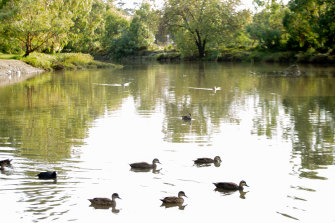 Forty dead carp wree dredged out of Gardiners Creek, which by Friday morning was a picture of serenity. Credit:Simon Schluter

"Not sure if it is low oxygen due to low water flows, pollution or a result of the recent dredging of this area?"

Melbourne Water said the soapy substance, low water levels and warm weather caused a lack of "dissolved oxygen" in the water, which likely killed the fish.

“Crews inspected the site and removed approximately 40 carp and have continued to monitor the situation up and downstream from the reserve," Melbourne Water's manger of north west regional services Jesse Barrett said.

“Melbourne Water will continue to work with the EPA to clean the affected area.”

The EPA has advised people to avoid contact with the water in the area until further notice.

"Following the second [EPA officer] attendance to confirm the dead fish, EPA requested that Melbourne Water complete a clean up, which occurred on Tuesday."

Melbourne Water officers will inspect the site again on Friday.

"Unfortunately, [the EPA has] not [been] able to trace the source in this case."

The EPA's investigation continues while Melbourne Water will keep monitoring the area.