Jessye Norman, the majestic American soprano who brought a sumptuous, shimmering voice to a broad range of roles at the Metropolitan Opera and houses around the world, died on Monday in New York. She was 74.

The cause was septic shock and multiple organ failure following complications of a spinal cord injury she suffered in 2015, according to a statement by her family.

Ms. Norman, who found acclaim as well as a recitalist and on the concert stage, was one of the most decorated of American singers. She won five Grammy Awards, four for her recordings and one for lifetime achievement. She received the prestigious Kennedy Center Award in 1997 and the National Medal of Arts in 2009.

In a career that began in the late-1960s, Ms. Norman sang the title role in Verdi’s “Aida,” Wagner’s heroines, characters in Janacek, Poulenc, Bartok and Strauss operas, and Cassandre in “Les Troyens” by Berlioz, in which she made her Met debut in 1983. She went on to sing more than 80 performances at the Met. Its general manager, Peter Gelb, on Monday called her “one of the greatest artists to ever sing on our stage.” 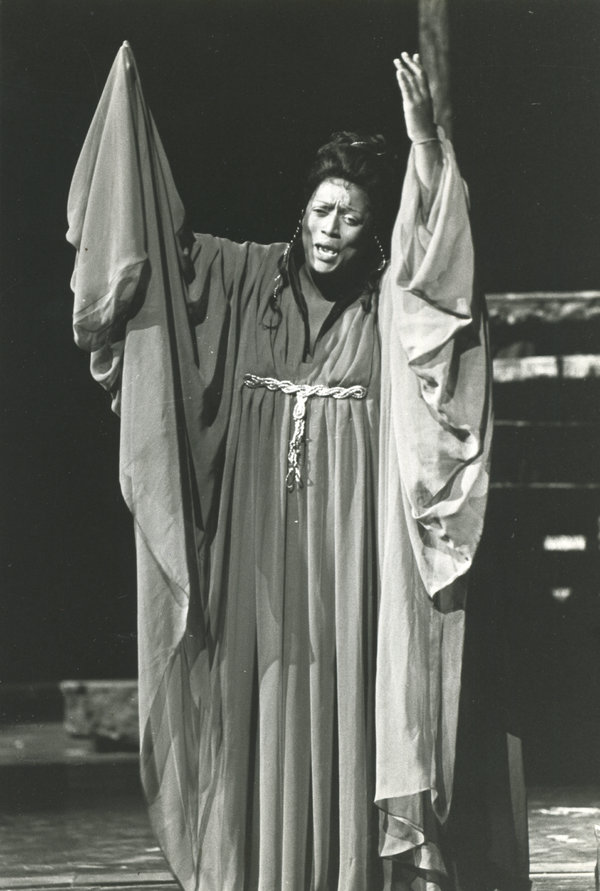 A keen interpreter as well as a magnificent singer, Ms. Norman had a distinctly opulent voice that sounded effortless, never pushed. It was especially suited to Wagner and Strauss.

In a review of a 1992 recital, Edward Rothstein of The New York Times likened her voice to a “grand mansion of sound.”

“It defines an extraordinary space,” he wrote. “It has enormous dimensions, reaching backward and upward. It opens onto unexpected vistas. It contains sunlit rooms, narrow passageways, cavernous halls. Ms. Norman is the regal mistress of this domain, with a physical presence suited to her vocal expanse.”

As an African-American, she credited other great black singers with paving the way for her, naming Marian Anderson, Dorothy Maynor and Leontyne Price, among others, in a 1983 interview with The Times.

“They have made it possible for me to say, ‘I will sing French opera,’” she said “or, ‘I will sing German opera,’ instead of being told, ‘You will sing “Porgy and Bess.” ’ Look, it’s unrealistic to pretend that racial prejudice doesn’t exist. It does! It’s one thing to have a set of laws, and quite another to change the hearts and minds of men. That takes longer. I do not consider my blackness a problem. I think it looks rather nice.”

A new production of “Porgy and Bess” is now playing at the Met; the house said it was dedicating Monday night’s performance to Ms. Norman.

Ms. Norman was born into a musical family on Sept. 15, 1945, in Augusta, Ga. Her mother was an amateur pianist, her father an insurance broker. She especially enjoyed visiting her maternal grandparents, fascinated by one particular piece of furniture.

“My grandparents were the only people I ever knew who had one — a grand pedal organ, or more accurately, a harmonium — right there in their house,” she wrote in her memoir, “Stand Up Straight and Sing!” (2014). “It lived over in the corner of the front room, and I remember thinking that it was the most exotic thing I had ever encountered in my entire life. As far as I can recall, we were never stopped from playing it, nor admonished for disturbing the adults.”

She began listening to opera on the radio as a child.

“I remember thinking that opera stories were not very different from other stories: a boy meets a girl, they fall in love, they cannot be together for some reason, and most of the time it does not end happily ever after,” she wrote. “For me, opera stories were grown-up versions of stories that were familiar to me already.”

She earned a bachelor’s degree in music from Howard University and studied at the University of Michigan and Peabody Institute. Her career received its first big boost when she won a first-place prize at the Munich International Music Competition in 1968. The next year, she made her debut on an opera stage at the Deutsche Oper Berlin in Wagner’s “Tannhäuser,” as Elisabeth.

Appearances at La Scala, Covent Garden and other major opera houses followed, and she quickly became one of the busiest opera divas on the scene. She also became a fixture on the gala and benefit scene. An accomplished recitalist, she made records of vocal works by Mahler, Debussy and Strauss, especially a critically praised rendering of his “Four Last Songs” with orchestra.

In her memoir, Ms. Norman recalled one of her earliest stabs at singing opera for an audience. She was in junior high school when, at a teacher’s urging, she performed the aria “My Heart at Thy Sweet Voice” from Saint-Saëns’ “Samson and Delilah.” She had been singing it in English at church functions and supermarket openings, but for the school performance her teacher had her learn it in French, in which it was written.

“I do think that if you can stand up and sing in French in front of an assembly full of middle-schoolers,” Ms. Norman wrote, “then you can do just about anything.”

Daniel J. Wakin is an editor on the Obituary News Desk. He has been a reporter and editor in the Culture and Metro departments and has reported from three dozen countries. He is the author of “The Man With the Sawed-Off Leg and Other Tales of a New York City Block” (Arcade, 2018). @danwakin