All Australians should wear masks indoors, but the country’s leaders have stopped short of agreeing to mandate their use as coronavirus cases from the new variant continue to climb.

Australia’s chief medical officers are exploring whether states currently requiring PCR testing before entry could move to no testing at all, as Prime Minister Scott Morrison said jurisdictions could move to rapid antigen testing as an alternative now. 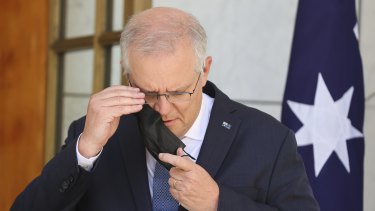 “This is putting unnecessary pressure on the testing system, and it is redirecting resources away from where there is better use of it – in particular, in re-establishing the vaccine hubs run by the states and territories,” Mr Morrison said on Wednesday afternoon.

National cabinet is also considering an end to contact tracing as the country knows it, with a move to alert people through check-in apps that they had been at the same venue as a COVID-19 case, and the health expert group examining whether casual contacts can be excluded from contact tracing altogether.

It also agreed to ramped up the booster rollout with Mr Morrison announcing that from Thursday the federal government will increase booster payments to GPs and pharmacists by $10 to return them to the same price they were paid for first and second doses.

But states have also been asked to accelerate their contribution to the booster program by reinstating closed hubs or bringing back staff to get to a target of up to 360,000 daily doses administered across the country. About 200,000 are now being given.

“We need to be able to return to those sorts of levels,” the Prime Minister said.

There has been no change to the interval between the second and third doses of the vaccine, which remains five months at this stage.

Each premier will detail how their state will act on recommendations that were discussed by national cabinet on Wednesday from the Australian Health Protection Principal Committee on how to slow the spread of the omicron variant.

Speaking after the meeting, Mr Morrison said they all agreed masks should be worn indoors.

“Wear a mask in an indoor setting. You don’t need to be forced to do it,” he said. “There’s no confusion about it, just wear one.

The AHPPC had urged the country’s leaders to bring back mask mandates to protect the country from the new strain of coronavirus. Chief Medical Officer Professor Paul Kelly, who leads the expert group, said it was up to states and territories to decide how to get people to wear masks.

“Masks use should be used because we know firstly, it works, and secondly to protect yourself to protect others,” he said.

Jurisdictions were split over whether to mandate mask use in the meeting. NSW Premier Dominic Perrottet has made it clear that he, like Mr Morrison, does not want to force people to wear them.

The Victorian government is reviewing the current restrictions and whether to introduce mask mandates in wider settings, after abandoning a plan last week to wind back mask restrictions as a result of the Omicron variant. Senior Victorian officials met after national cabinet meeting to discuss the settings, and Acting Premier James Merlino is expected to announce the government’s response on Thursday.

There was also division about winding back PCR testing for interstate travel, but some states including WA saw merit in reviewing the system. The Northern Territory has eased its PCR testing requirements for travellers but still requires them before arrival, while Queensland has flagged it could move to rapid antigen screening for travellers from January 1.

Mr Morrison said up to 25 per cent of people in the long queues for PCR testing around the country at the moment were not close contacts or showing symptoms, but were trying to comply with the travel rules imposed by Queensland, South Australia, Tasmania, the Northern Territory and Western Australia.

“There is no AHPPC medical expert panel consensus opinion which says you must have a PCR test to travel from one state to another,” he said. “States are the ones imposing those public health orders.”

Earlier on Wednesday, Queensland Premier Annastacia Palaszczuk said she would consider changing requirements to the rapid tests after January 1 and upon taking expert health advice.

But Mr Morrison said states requiring tests could shift to rapid antigen screening instead of PCR tests immediately if they wanted.

The AHPPC is examining whether testing is required at all or whether people can move to using rapid antigen tests for travel, as Mr Morrison said some jurisdictions want to keep pre-travel testing in place.

Mr Morrison said there had been strong discussion about the impact these requirements had on the testing capacity of other states.

“It is important that we focus the PCR tests on those who are close contacts, and those who are symptomatic, and people who can get those tests and not be standing in queues with other people who are just looking to get on a plane,” he said.

Mr Morrison said leaders have asked the expert advisory group ATAGI to bring back more advice on the booster program, including special consideration about younger people, who were the last group to be eligible for vaccines and among whom Omicron is quickly spreading.

“There’s been no change to the interval – that will be determined by the immunisation experts and no one else,” Mr Morrison said.

Leaders also agreed to move to a common definition of casual contacts and rules around what is required of them. They have asked the AHPPC to draw up a definition and return with recommendations when national cabinet next meets in a fortnight.

“You cannot have different rules in different places of what a close contact is and what a casual contact is,” Mr Morrison said.

“What matters is how you’re managing those close contacts and how they’re defined and what you have to do if you are someone in that situation.”