Bell — who shares daughters Lincoln, 9, and Delta, 7, with Shepard — called her husband the "MVP" for spending "weeks" making "his spooky Halloween Hayride" for the children in their neighborhood.

It’s safe to say Dax Shepard pulled out all the stops for his family and their neighborhood this Halloween.

On Tuesday, Shepard’s wife Kristen Bell shared a post on Instagram that featured photos and a video from their “spooky” Halloween celebrations, including their costumes. The 42-year-old actress and daughters Lincoln, 9, and Delta, 7, were the Sanderson Sisters from “Hocus Pocus,” while Shepard, 47, was a cat.

But their awesome costumes weren’t the highlight of the Shepard family’s Halloween as Bell revealed her husband created an epic haunted hayride for the kids in the neighborhood.

“The Sandersons and their Cat 🎃,” Bell captioned the post, above. “Shoutout to our favorite Dad @daxshepard who works for weeks prepping his spooky Halloween Hayride for the whole neighborhood!!”

“The Good Place” star shared a brief glimpse of the hayride in a video, which can be seen in the fourth slide of the post. In the clip, a group of children — dressed in Halloween costumes of course — can be seen riding on Shepard’s DIY hayride, which was decorated with orange string lights, as Michael Jackson’s “Thriller” plays in the background.

The person filming the short video, presumably Bell, cheered as the kids came by. And while you can’t see much in the clip, it’s easy to tell that the hayride looked like a blast!

In her post, Bell also shared a fun shot of Shepard, 47, poking his head out the driver’s seat of a car, which was towing the haunted hayride trailer. “MVP year over year @daxshepard,” Bell wrote on top of the photo. 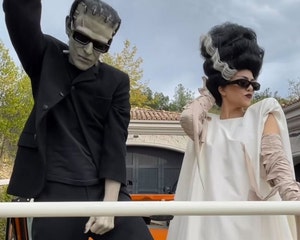 Among the other images in the carousel of the post included a family photo of everyone in their costumes, a BeReal selfie of Bell and her friends, a shot of a delicious-looking charcuterie board and a rather interesting pic of candy that had fans scratching their heads.

The photo featured a little over a dozen squares marked on the hardwood floor with blue tape, with the majority of the squares including some candy. And Bell’s followers took to the comment section to ask for answers.

“Why is the candy in weird shapes of tape? I feel like I missing out on something here,” a person commented, while another asked, “What’s the photo of candy being in duct tape shapes on the floor?”

“I need to know what the tape is for,” another said.

Hopefully, Bell will reveal the context behind the photo, but either way, it seemed that Bell, Shepard and their kids had a super fun Halloween! See what others stars dressed up as in the gallery, below.