Ballet takes us to a strange planet, where gravity’s pull is slight and people have no elbows. It’s a place of liquid limbs and flawless surfaces. Step into a ballet studio, however, and things look far more earthly. The studio is full of things you won’t see on the ballet stage: tattoos, knee braces, jewellery, muscle tape, bandages. A dancer pushing herself to the limit collapses full-body against the barre. There are sounds you won’t hear in the auditorium, too. They may be playing snowflakes and smoke fairies but two dozen dancers landing in unison growls like thunder. Most unexpected is the breath: as more than 30 dancers complete a vigorous sequence, a great tide of gasping and panting rolls from their collected forms. It’s oceanic. 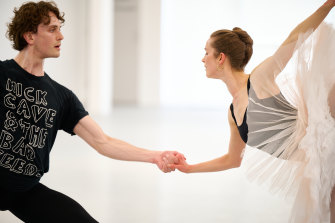 Callum Linanne and Sharni Spencer during rehearsals for the Australian Ballet’s Celebration Gala. There’ll be no Nick Cave T-shirts on the night. Credit:Christopher Rodgers-Wilson

You won’t see the sheen of sweat from the stalls any more than you’ll see the beards some male dancers will shave before opening. You’ll see white teeth, but not the private smiles dancers share. In fiction and on screen the ballet world is famously bitchy, but the atmosphere at the elite level of the Australian Ballet seems quite the opposite: painstakingly collegiate, attentive and generous. You wouldn’t survive a day otherwise.

It’s the first time these dancers have been together in a room for weeks. Twenty of the AB’s dancers are just back from performing a version of the company’s Celebration Gala. The gala’s Sydney and Melbourne seasons differ; each features works the respective cities missed due to you-know-what. 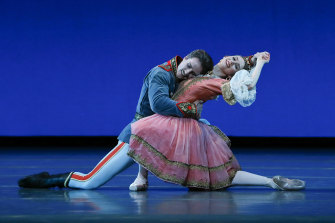 It’s a roomful of firsts, really. This gala will be a proper debut for David Hallberg, the American dancer who is now artistic director of the company. It will be the first time most of these dancers set foot on the State Theatre stage for close to two years. It’s also the first time a journalist has been allowed into rehearsals since … forever? Ballet is notoriously protective of image; media have traditionally been barred access from the studio, while the dancers’ EBA gives them the right to approve any images of them used for publicity.

But Hallberg has been vocal about wanting to open the AB to new voices and minds, and he’s certainly using the gala to elevate dancers to rare heights. Soloists such as Imogen Chapman and Yuumi Yamada will perform roles usually reserved for principal artists; on opening night a solo will be performed by Aya Watanabe, only four years out of ballet school and now in the corps de ballet, the company’s most junior rank.

With so much riding on image, you might expect the gala will be rehearsed to death. Nope: the entire company will premiere the Melbourne edition in just four days. That’s how long they have to get their acts together. 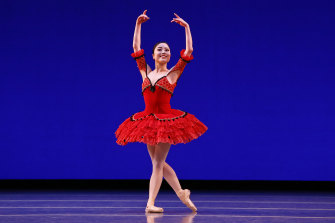 The prospect of rehearsing a 2½-hour play in under a week would be laughable. Ballet is a particular contraption, however. It’s not assembled by the singular hand of one director; instead, a team of coaches, ballet mistresses and masters simultaneously work on separate sections of the same ballet. Principals might rehearse a complex pas de deux while a senior artist grapples with a demanding solo; elsewhere the younger ranks of coryphees and corps de ballet practise swirling and coalescing around their more senior – and at that point absent – colleagues.

Hallberg sits on the barre, straight-backed, brow furrowed, watching the various sequences of each dance as they are fitted into a whole. He is often animated by what he sees or hears, echoing the dancers in tiny ways. Occasionally he’ll contribute suggestions, but given the precision of ballet’s formal language it’s fascinating how his instructions are more physical than verbal: “It gets a little – here – it gets here – and it’s got – to go there.” 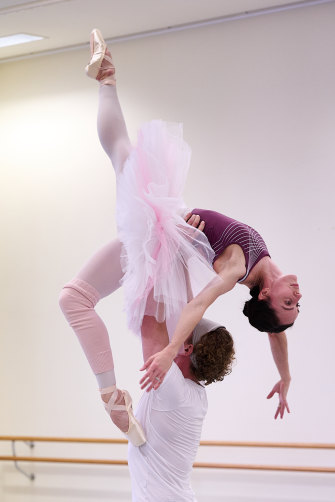 Each scene begins with the dancers walking the sequence out in loose fashion, limbs flapping without commitment, minimal energy expended. There’s a quality of caricature to it all; they’re like Muppets parodying the seriousness of ballet. And then they go through it all again, but up.

Dancers who aren’t being rehearsed pepper the perimeter of the studio, sewing ballet shoes while stretching, making small adjustments to each other’s hair, indulging in muted chatter. Most of the time, however, they’re fixed on those who are receiving instruction, with a look that’s initially hard to define. It’s not judgment or appreciation or envy. They’re studying their peers, it turns out. Each dance will be performed by two or three casts, and when they’re not themselves practising, these dancers are learning in the third person.

The next day, in the labyrinthine bowels of the Arts Centre, costume racks crowd corridors and dancers’ names are plastered on changing room doors. The company are in the State Theatre for a tech run. Assembled on the stage, the dancers form a surreal tableau: masks and tutus and puffer jackets and trackie dacks.

This stage is 40 per cent larger than the stage the dancers played in Sydney, which means they must travel 40 per cent further, perform a work 40 per cent more tiring. To even reach the first spotlight from the wings, you need to be running full tilt, and in the case of ballet, making it appear effortless. 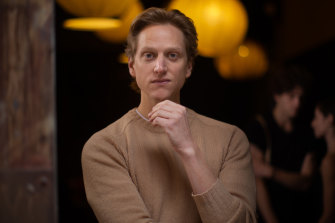 Hallberg is in the stalls, this time perched on the back of a chair, again hovering rather than sitting. As ballet mistress Elizabeth Toohey counts out a sequence – 1 and 2 3 and 4 5 and 6 and 7 and 8 swimming and 7 and 8 this is great and feet and de da da – he once more subtly mirrors the performance he’s watching. He’ll provide a final series of notes to dancers – called corrections – on the day of opening night, but for the most part he lets the many cogs of the machine interact the way they’re supposed to, without interference.

Hallberg is often described as a star of the ballet. The quiet way he approaches the making of this gala speaks to the paradox of stardom in contemporary ballet, however: it’s a team art, demanding so much discipline and conformity that mavericks are an existential risk. The lives and limbs of your fellow dancers are quite literally in your hands. 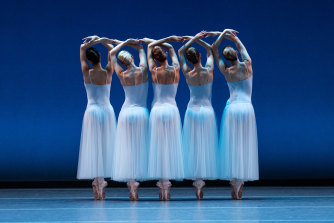 Australian Ballet performers in Serenade, for the Celebration Gala.Credit:Daniel Boud

Dress rehearsal: you don’t realise the work a skirt does until you’ve seen the same dance performed in sweatpants. Hair and makeup manage some heavy lifting, too; AB dancers do their own.

Where previous rehearsals were soundtracked by solo piano, there is now the orchestra. Conductor Nicolette Fraillon commands her musicians with such precision – accenting the dance, directing the audience’s attention – that it’s already hard to comprehend how a performance is created without this full score. Only during a brief lull in which the orchestra takes notes can that ocean of dancers’ breath be heard.

The big night arrives. In the dim light by the stage door, musicians arrive singly or in pairs, hard-cased instruments slung over shoulders, takeaway dinners in hand. On the concourse above, patrons are taking selfies beneath the spire. People aren’t sure if they can air kiss. There aren’t many masks in the stalls. The ballet has always been a place to be seen.

When Hallberg takes to the stage, his introduction is spare but effective. “It is with great pleasure that I have the honour after two years to welcome you back to the Australian Ballet.” The crowd erupts. He smiles. “I’ve been waiting for that applause for 12 months.” 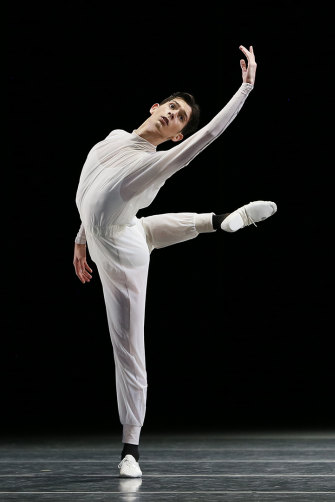 Adam Elmes performs in an excerpt from Watermark for the Australian Ballet’s Celebration Gala. Credit:Jeff Busby

That applause only intensifies over the coming hours. But even though individual dancers enjoy countless rock-star moments, in a sense there are no soloists at this level of ballet, not truly. Those stand-out sequences only exist because of the elaborate scaffolding surrounding and supporting them, those innumerable directors and coaches and physios and philanthropists, not to mention the orchestra, whose music hides the ragged gasps, and the fellow dancers who will pluck a stray hair from your shoulder just before you sprint onto the stage.

The final strut in all that support is the last to be put in place: the audience. Ballet fans can be obsessive, but at the gala opening the adoration is overflowing. At one point a lone dancer begins spinning at breathtaking velocity and keeps doing so, unstoppable, defying the laws of physics. Two thousand onlookers spontaneously start clapping in rhythmic unison. Do they know she’s just a corps de ballet, only four years out of school, for one night given the chance to bring the house down?

The AB’s Celebration Gala runs until December 18. The Summertime Ballet Gala is on February 17-19 at Margaret Court Arena.