Secretively packing his holdall, Dennis made sure it had everything he needed: warm clothes, a transistor radio and £40 in cash.

It was 1965 and he and his teen girlfriend, Marie, had made plans to elope to Gretna Green to get married.

Their story was common at the time.

Dennis had asked Marie’s parents for her hand in marriage, but was refused because they thought – at 19 – she was too young. Marie says: ‘They thought I didn’t know what life was about. They were old school.’

Teenagers have been marrying at the little Scottish town near the border with England since the 1754 introduction of the Marriage Act, forbidding under-21s to marry without their parents’ permission in England and Wales.

The law didn’t apply in Scotland, so over the years hoards of teens eloped to the quaint border town in Dumfries and Galloway, to get hitched in speedy ceremonies and in hot pursuit from angry parents.

While teenage marriages are rare these days, thanks to its romantic reputation, Gretna Green has become a destination for couples of all ages. It is now known as the UK’s wedding capital with more than 3,000 couples marrying there every year.

It was the chosen venue for Kerry Katona back in 2007, when she married her taxi driver boyfriend Mark Croft on Valentine’s Day in The Mill Forge at Gretna.

The area has become a celebrity onscreen in its own right, too. Not only was it the star of Channel 4 show Wedding Town in 2015, but Gretna Green also made an appearance in the final series of Downton Abbey, when Lady Mary considered the location for the Crawley family wedding.

Meanwhile, soap story writers have also kept it a firm teen-wedding favourite, with EastEnders’ Ricky Butcher and Sam Mitchell eloping to Gretna Green in 1991 when Sam was just 16, as did Tiff and Keegan in 2019. Coronation Street’s Nick and Leanne also ran off to Scotland to get married as teenagers in January 1998. 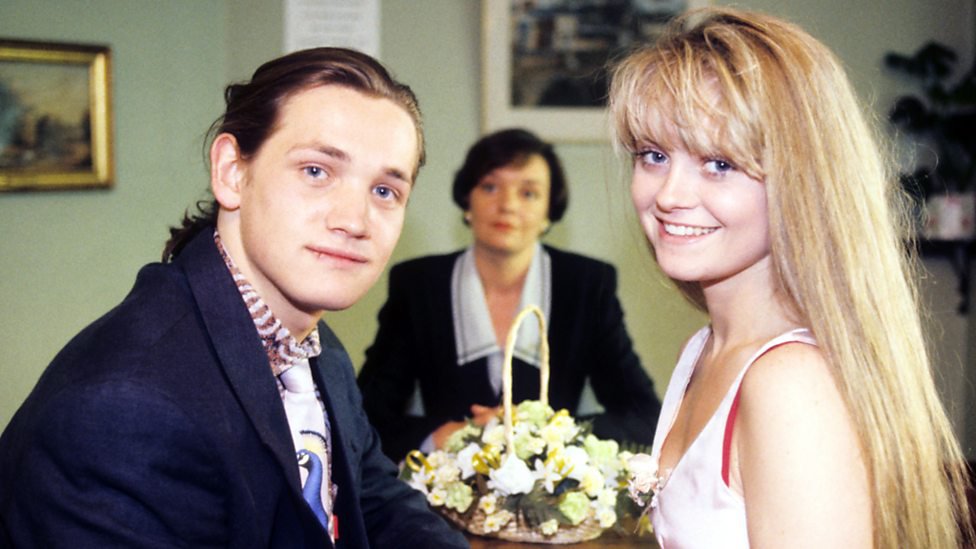 Back in the real world, lovebirds Dennis and Marie tell Metro.co.uk how they first met on a train in 1963 when Marie, now 75, was just 16 and Dennis, now 77, worked steam engines on the railway.

Dennis moved into her family home where he shared a room with her brothers. ‘It was all decent. We weren’t living in sin. Her mother wouldn’t allow that,’ he says.

It was Dennis’ idea to elope, so he got packing.

‘I put some odds and ends in a holdall. When it was ready to be zipped up, I went into one bedroom, lowered it through the window on a piece of rope onto a flat roof. Then I went outside, ducked down, crept past the family who were all watching television unawares, and got the bag off the roof.’

He took it to Birmingham New Street and deposited it in left luggage.

The next morning, Marie remembers saying goodbye to her mother as she left for work at a cardboard factory. She says: ‘My mum was standing by the cooker. She looked at me and said, “See you later Bab.” I said “See you later”, but I knew I wasn’t going back. I felt bad. There was no need for me to do it. There was no ill-feeling. They just wanted me to be a bit more mature before I got married.’

But the couple were committed. Dennis had bought a small two-person tent and a few pots to cook on. On Friday afternoon, after work, they bought a 9-carat gold ring for 3 shillings from a local jeweller and headed for the railway station.

Marie says: ‘We were waiting for the train and I kept looking at the clock, and thinking how worried Mum and Dad would be.’

There were no seats available and the couple stood up the entire journey – eventually arriving at Carlisle at 3am. At seven that morning, having had no sleep, they caught a bus to Gretna Green.

To get married at Gretna Green, you have to have filled out the right paperwork – known as M10 forms – at least 29 days before the wedding. Disappointed but determined, the couple went along the road to a field which was home to a handful of tents, caravans and a pig sty. They pitched their tent and waited.

It was a challenging stay.

The Scottish weather unleashed frequent downpours, leaving their tent and belongings sodden. They had to keep clean using a nearby wash house where they washed in freezing cold water. They were kept up at night by squealing piglets and the hard ground, which they softened with hay. One day, they were bombarded by a disturbed hornets nest, leaving the outside of their tent black with insects that hummed and throbbed angrily against the canvas while they cowered inside. And there were rats.

Despite all this, they were happy. They watched other couples get married, and missed out on the fish and chips and champagne as they had to save money. Instead, they cooked bacon and potatoes on a tiny gas cylinder. When they needed to replace it they had to walk four miles to a shop in a nearby town.

Dennis and Marie never got fed up with each other, Marie says. ‘We knew we had to stick it out,’ she explains. ‘We got friendly with everyone there. We got so used to it, we didn’t want to leave in the end. It was a lovely experience.’

When the day finally arrived, they asked a couple who lived next door to the registry office to be witnesses. ‘It was a quick ceremony. You don’t even realise you’re getting married. Before we knew it we had our marriage certificate and we were on our way.’

They married alongside 10 other couples that day – and even made the papers. Marie was wearing a cotton dress and cardigan. Their wedding breakfast was a pork pie, shared between them, on the train home. ‘There was no cake or anything. Then it hit us. We had to face my mum and dad,’ she remembers.

‘When I walked through the door, she just looked at me and nodded. We told them that we had got married. Dad came home from work and looked at me, with a look of surprise and happiness.’ Dennis and Marie were forgiven straight away.

The couple, who now live in Welshpool, had seven children and a very happy marriage. The couple even renewed their vows at Gretna Green last month in front of the Gretna Green Old Smith Marriage Anvil.

The anvil is iconic and well-known to anyone who has married at Gretna Green. It belonged to the blacksmith, who was permitted to carry out the daily weddings.

As Michelle Hall, Senior Manager at Gretna Green, explains: ‘The blacksmith is the pinnacle to all of this because it used to be too expensive to let their fire burn out, so the blacksmith’s forge was always being tended.

‘The couples would come over the border, usually being chased by parents who weren’t happy about the forthcoming wedding and they would get to the crossroads, jump out the carriage knock on the door, and the blacksmith or his wife would open the door and in they would come and he was asked to marry them, often in quite a lot of haste.

The forge is steeped in intriguing stories of elicit marriages, or tales of noble men running away with servant girls that they had fallen in love with, Michelle says.

‘The stories are rebellious. But they are what that really make it very special because despite everything, love conquers all. I’ve worked at Gretna Green for 17 years, and for me, in that building, the love is in the walls. It’s everywhere. I wish those walls could talk and tell me all the amazing stories of the couples that have been through those doors. It’s the beginnings of a new life for so many people.’

Teenage marriages are few and far between now, Michelle says. And now the legal marriage age is to be raised from 16 to 18, after the Marriage and Civil Partnership (Minimum Age) Act 2022 was passed in parliament in April.

But couples are still being enticed by the romance of Gretna Green. Siobhan and Kat Mcinally married at Gretna Hall Courtyard on 24 June last year and decided to double up, using the wedding as a gender reveal ceremony.

With a baby on the way, the couple wanted the ceremony to be intimate, alternative and inexpensive. The day cost less than £1,000 – Kat’s dress was £60 – and they were married in front of 22 guests.

Kat, 36, says: ‘We had a lot of support from our family. Our wedding was never frowned upon. But there is that element of naughtiness – getting married at Gretna. I know some people look down on it, as a poor person’s place to get married. But I just think it’s the total opposite, because it’s so magical. It is about the true love stories in people’s lives, not the expensive day.’

Kat, who was 15 weeks pregnant at the time, had to rush to the ceremony like her teenage forebears, but for a very different reason. She’d had a scan that morning – so early on in pregnancy, it was the first date she could get one – to determine the baby’s gender, which was passed onto a family member so the happy couple could stay in the dark until after the wedding.

Kat, from Strathaven, says: ‘I was suffering from really bad morning sickness. That was on my mind all day. I was walking down the aisle, panicking that the morning sickness was going to happen.’

She had been ill earlier that day, and the nerves didn’t help. Siobhan, 32, was also on edge when she arrived.

‘I was nervous,’ she admits. ‘But when it got started, it was just a celebration. It was a good day. And the gender reveal just made it more special. There hasn’t been a gender reveal done at Gretna before. So it was quite a big thing. It was really lovely.’

The day went without a hitch – apart from when Siobhan’s brother-in-law’s trousers split, threatening a different kind of gender reveal. After the ceremony, the couple fired cannons to the skies, revealing plumes of pink smoke; the baby was a girl, and baby Emily is now five months old.

Siobhan, a nightshift manager for McDonald’s, comes from a very female-heavy family. So they laughed when the pink smoke emerged. Kat adds: ‘We were so happy but it was so funny, that it was a girl to add to the rest of them.’

It was a classic happy ending. The couple had to go through fertility tests and treatment to conceive, and it had been a worrying time. The arrival of little Emily came with a wonderful surprise a few weeks later. Kat learned that some eggs she had donated during the IVF process had been viable, and a little boy had been born to another couple.

Somewhere in the world, Emily has a little brother, who she may one day meet.

Kat, who works in a nursery, adds: ‘Married life has been brilliant. Having a newborn can be difficult, but I’ve loved every moment of it. It’s what we’ve both always wanted.

‘And Emily now has a half brother somewhere who is coming up to two years old. It feels really overwhelming. Knowing that someone else was able to feel the way we did when Emily arrived because of the eggs I had donated is really special.’