Australia’s lowest paid workers will receive an inflation-busting wage increase after the industrial umpire raised the national minimum pay by 5.2 per cent, the highest rise since 2006. 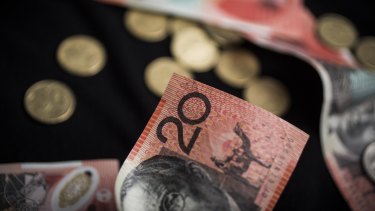 The biggest fall in real wages since the GST highlighted the importance of cost of living pressures in the election campaign.Credit:Dominic Lorrimer

Fair Work Commission president Iain Ross announced the outcome of its annual wage review 12 days after Labor recommended the independent body increase the pay of low-paid Australians in line with the 5.1 per cent inflation rate to ensure wages did not go backwards.

The commission’s decision will also affect more than 2.6 million people on industry awards linked to the outcome of the wage case.

Prime Minister Anthony Albanese ignited a political storm when, as opposition leader during the election campaign, he said he “absolutely” backed a pay increase for minimum wage earners to match the rate of inflation, prompting former prime minister Scott Morrison to call him a “loose unit” in what became a defining election issue.

Rising living costs have been a core concern of the new government, with Treasurer Jim Chalmers saying the Reserve Bank’s decision to lift interest rates would put further strain on households and limit Labor’s ability to reduce the $1 trillion national debt.

The government’s submission said increasing pay to the rate of inflation was warranted given inflation was at a 21-year high “and is expected to increase further in the near term due to persistent and compounding supply shocks”.

Workplace Relations Minister Tony Burke said earlier this month the government had not limited its recommendation to only those on the minimum wage, instead using the term “low-paid” Australians, which Fair Work defines as people on two-thirds of the median adult full-time hourly earnings.