What looks like the most impactful snowstorm of the winter so far has its sights set on dumping snow all the way from the Midwest to the Northeast, impacting over 100 million people. Some cities may get buried in up to 18 inches of snow by early next week.

Cities from Chicago to Cleveland to Washington, D.C. to New York are watching and waiting to see just what the storm will do as it slides east this Sunday through Tuesday. This is the same storm system that drenched parts of California with up to an incredible 15 inches of rain and over 100 inches of snow this past week.

Right now the storm is located across the Southwest and is on the move eastward. At the same time, brutal cold has engulfed the Great Lakes and Northeast, where wind chills are as low as 20 degrees below zero in parts of New England. 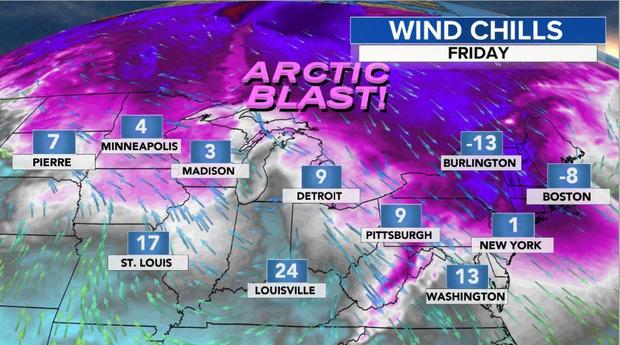 This cold air brings with it both the promise of a major snow storm and the complication of perhaps too much cold. That’s because this cold air is associated with an atmospheric block. The strength of this block will determine whether Washington, D.C. gets buried in heavy snow or if the bullseye ends up near New York City and southern New England.

In other words, will this block suppress the storm track south or allow the storm to inch northward? At this juncture, it is too early to know. So far this winter, snowfall in Washington, D.C. has been almost non-existent, with only a third of an inch.

To block or not too block, that is the question. Or really…how much will this block, block this storm from moving northeast? The key area is the confluence over the Northeast. Euro has it strong. Other models are less bold with the confluence. Is the truth somewhere in between? pic.twitter.com/ZdKkgehiQf

What we do know is heavy snow will fall across the Midwest and Ohio Valley Saturday night and Sunday from Chicago to Cleveland and surrounding areas. In total, the heaviest band of snow should dump 6-12 inches by Sunday night, perhaps including Chicago, Indianapolis and Columbus. 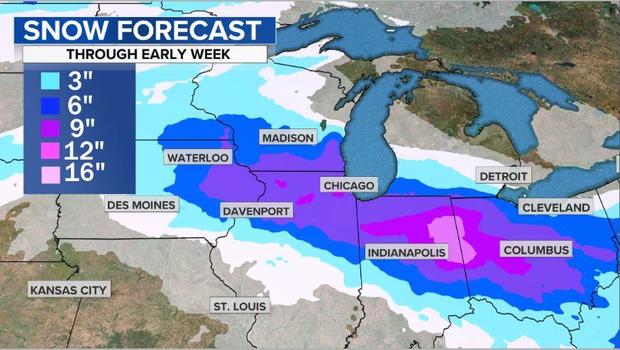 On Sunday the storm will move toward the East Coast, spreading snow into parts of Virginia and southern Pennsylvania. In an effort to undercut the cold air block, the storm will transfer its energy to a developing coastal storm along the North Carolina coast. The snow may be heavy at times in places like Washington, D.C. 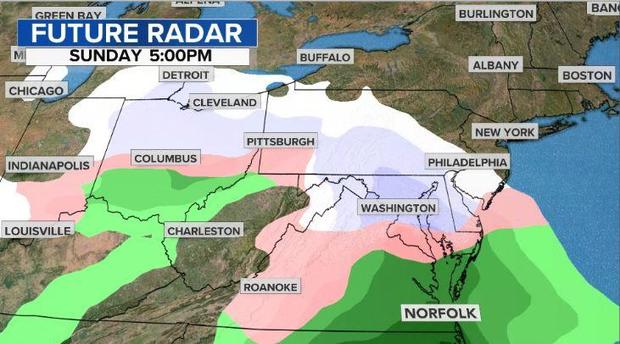 Now comes the tricky part. Does the storm slide eastward out to sea, keeping cold air locked into the Washington area and the heavy snow bullseye between D.C. and Atlantic City? Or does the storm move northeastward, burying New York City, Providence and perhaps Boston in over a foot of snow?

It’s too early to be sure. But it does appear that the blocking scenario will make this a prolonged event with some cities seeing snow for 36 hours, Sunday through Tuesday. Anyone who gets stuck under the heavy band is likely to pick up 12-18 inches, with isolated spots near 20 inches.

If the snow reaches New York City, it would likely begin early Monday morning, and then reach Providence Monday afternoon. The storm should exit Tuesday night. 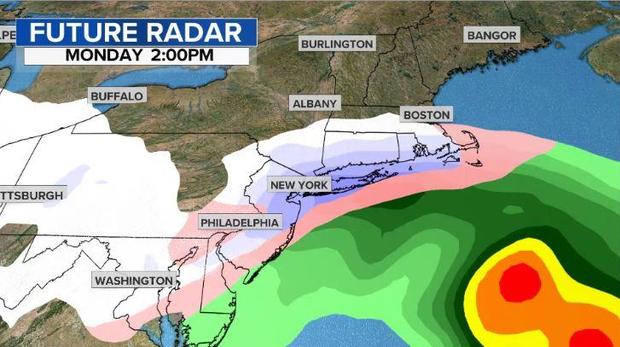 Below is a comparison of two models that display two different potential outcomes. The first one is the Friday morning American GFS model showing robust snowfall from Washington, D.C. to New York City. Rght below it is the Thursday night European run, which shows the heavier snow sliding south of New York City and clipping eastern New England. 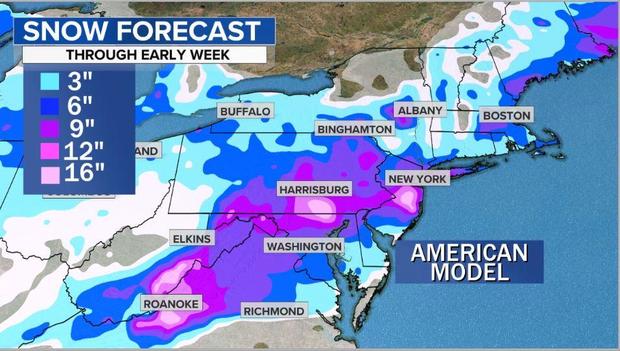 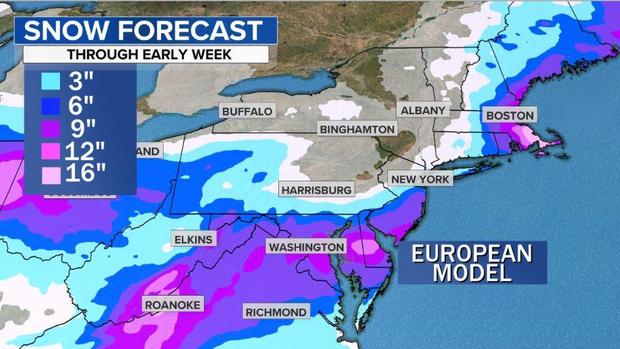 The details will become more clear once a given city is within 48 hours of the storm’s arrival. So stay tuned…