A metal detector enthusiast who found a lost wedding ring revealed the woman it belonged to asked him to put it back where it came from, after revealing she tossed it away following a ‘bad divorce.’

Steve Andrews, from Jersey, thought he was doing the right thing earlier this year, when he began looking for the owner of a wedding band he came across on one of his metal detecting expeditions.

He had found the ring, which was hallmarked from 1989, on the banks of St Aubin’s Bay, Jersey, in September, and shared it on the Jersey Lost Ring Metal Detecting Facebook group in the hope it could be returned to its rightful owner.

But in an update to his original post, Steve revealed the owner of the ring asked him to put it back into the sea, explaining she had thrown it away when the marriage ended. 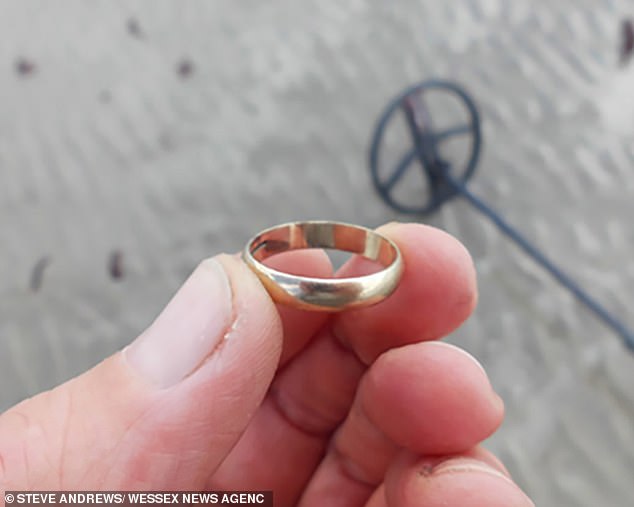 A metal detector enthusiast who found a lost wedding ring in St Aubin’s Bay in Jersey revealed the woman it belonged to asked him to put it back where it came from, after revealing she tossed it away following a ‘bad divorce’

The woman, who did not wish to be identified, told Steve: ‘I never want to see it again.’

The metal detectorist found the band at the beginning of September while on one of his walks.

The ring, which was a simple gold band, was engraved with the year 1989, which he thought was the year the wedding took place.

Steve said he knew it was ‘a long shot’ but hoped he would return the piece of jewellery to its rightful owner.

Steve initially shared a picture of the ring on a Facebook group in hopes of finding the woman it belonged to, but later shared an update revealed she wanted nothing to do with the ring

He reached out on social media, with the post being shared nearly 200 times by locals keen to see the wedding band reunited with its owner.

Steve usually gets a delighted response when he posts on social media about finding a long-lost personal treasure on the beach.

However, it wasn’t quite the happy ending he had hoped for when the owner got in touch.

He later updated the post to inform readers that a lady in been in contact with him.

She said she had thrown the ring away ‘on purpose after a bad divorce’ and never wanted to see it again.

He confirmed in the post that he would be putting the ring back where he found it – in the sea.

‘I’ll pop it back when I’m next down there’ he said.

Steve featured in a happier story in June when a butterfingers bridegroom was devastated after he lost his wedding ring on honeymoon, just two days after marrying the woman of his dreams.

Richard and Anne Whetter, from Bristol, were on honeymoon on Jersey and went for a lovey-dovey paddle in the sea at romantic Portelet Bay.

Richard, 44, said ‘I made a conscious decision to take my wedding ring off – ironically, I did not want to lose it in the water.

‘I put it in my shoe for safe-keeping. Of course, I have never worn a wedding ring before because we’d only got married two days earlier, on Saturday.

‘When we came out of the water, I picked up my phone and wallet instinctively, and I picked up my shoes – completely forgetting about my wedding ring!

‘When we got back to the car I realised that my wedding ring was not there.

‘My heart sank – I assumed the ring would be lost forever.’ 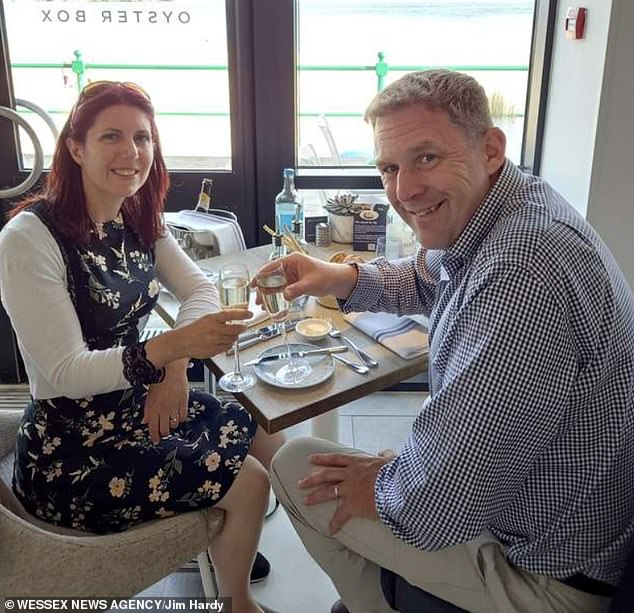 Richard Whetter, right, lost his wedding band two days after his wedding, and Steve helped him and his wife Anne locate it

They searched and searched but the band of gold was buried among billions of grains of golden sand in the bay, which stretches for more than a mile, and the tide was coming in.

Fighting back tears, Richard and his new bride Anne, 42, trudged back to their hotel, The Atlantic, and told senior hall porter Nathan Rowland their sad story.

Steve, who does not charge for his work, said ‘Richard gave me a very good indication of where his wedding ring would be and once I started searching I located it no more than ten minutes later.

‘It was a great piece of teamwork between Nathan, Richard and me and it was a pleasure to play my part in looking after Jersey’s guests.’

They got a photo momento – Steve marks each of his finds with a picture of a Lego metal detectorist.

He uses a mini-replica of himself with matching clothes and a tiny metal detector.

‘The thing I enjoy most about detecting is reuniting people with their items’ he said at the time.

‘I was delighted to find the ring – it was one of the quickest searches I’ve ever completed.

‘The Lego man is just a nice thing to send to people – I find their item and take a photo as a sort of ‘I’ve found it!’.

‘I got the Lego man as a jokey present from my sister, and it just stuck.’

Delighted Richard said ‘Nathan’s quick thinking in contacting Steve really did save the day and meant we could continue to enjoy our honeymoon.

‘I’m really grateful for Steve. What could have been an absolute disaster turned into a valuable lesson learnt.

‘Losing my ring was the worst part of the honeymoon – and finding it was the best part!

‘What I could not get over was on Jersey, people are really willing to give up their time for free to help other people.

‘I don’t get that much in my life, so I was absolutely gobsmacked.

‘We leave Jersey with the fondest of memories of the beautiful island and friendly people.’

Atlantic hotel boss Patrick Burke said finding the ring on the beach was a ‘miracle moment’.

‘We are extremely proud of Nathan and the whole team here at the hotel who consistently go the extra mile to look after our guests and deliver the very best service.

‘We wish Richard and Anne the happiest of lives together with their wedding rings firmly on their fingers!’