A political row over the cost of living is building pressure on Prime Minister Scott Morrison to cut some of the federal government’s $20.8 billion in petrol and diesel excise while the war in Ukraine drives up global oil prices and reshapes the federal election debate on household budgets.

A change to the excise is on the agenda in the internal debate over the March 29 budget alongside a tax plan designed to win back voters at the election due in May, with cabinet ministers canvassing measures to claim workers will be better off under the Coalition. 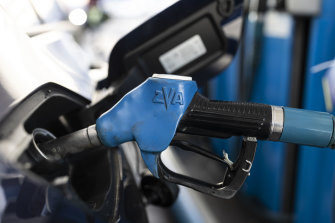 With petrol now costing about $2.20 per litre and tipped to rise to $2.50, the government faces calls for a temporary cut to the excise.Credit:Getty

But with petrol now costing about $2.20 per litre and tipped to rise to $2.50, the government faced calls from South Australian Premier Steven Marshall for a temporary cut to the excise after a “robust” argument in national cabinet last Friday over budget spending.

Victorian Premier Daniel Andrews and Queensland counterpart Annastacia Palaszczuk backed a proposal from NSW Premier Dominic Perrottet to discuss health costs to help fund more elective surgery and prepare for the next variant in the coronavirus.

The moves pit several premiers against Mr Morrison but are increasing the frustration inside the federal government over state demands for tax breaks or spending increases when the federal budget is forecast to reach a deficit of $99.2 billion this financial year and $98.9 billion next year.

With United States President Joe Biden telling Americans that “Putin’s price hike” is driving up the cost of oil around the world, Mr Morrison also blamed Russian President Vladimir Putin and his invasion of Ukraine for the cost pressures felt by Australians.

“So we’re working with other countries around the world at the moment in terms of releasing fuel reserves to try to alleviate the pressure on fuel prices.”

Asked whether he would change fuel excise – worth about 44 cents in every litre – to ease some of that price pressure as petrol heads toward $2.50 per litre, Mr Morrison did not dismiss the idea but avoided any commitment.

“The budget is coming up at the end of this month,” he said.

Mr Morrison noted, however, that the petrol price had risen from $1.70 to $2.20 per litre in recent months and that the changes were greater than the excise itself.

Others in the government believe that the next increase in the excise, likely to be about 1 cent under rules that index the excise to inflation, would be swamped by changes to global oil prices if the budget included any temporary pause.

Mr Marshall, who is facing a state election against Labor opponent Peter Malinauskas this Saturday, said his government would do more to cut the cost of living but needed federal intervention as well.

“What we really need is some relief at the federal level with regards to excise,” he said.

“It doesn’t need to be permanent but while we’re in this elevated fuel price situation we’d really like to see some relief coming from the federal government.”

Fuel excise was frozen at 38.143 cents per litre in 2001 when the prime minister, John Howard, stopped indexation during a furore over the impact of the GST on fuel and other costs. The indexation was restored under Treasurer Joe Hockey in 2014 in a move that added $4.1 billion to federal revenue over four years.

Revenue from the excise is due to increase from $19.2 billion this financial year to $20.8 billion next year, with the proceeds from diesel worth more than twice as much as the revenue from petrol. While the adoption of electric vehicles will erode this over time, the last budget update forecast excise revenue would rise to $23 billion by 2025.

The net proceeds from excise are lower, however, when tax deductions such as the diesel fuel rebate are taking into account.

Treasurer Josh Frydenberg has framed the argument over household costs in terms of confronting Russia over the attack on Ukraine.

“While Australia is better placed than most to withstand these pressures, there will be costs borne by Australians in defending our values,” he said last week.

“For liberal and free nations, this is a price that we must be willing to pay for the right to live free of fear and coercion.”

Labor has rejected the government’s claim that higher prices are the result of the war in Europe, pointing to figures showing petrol prices were already high before the crisis, while also campaigning on the threat to wages from rising inflation.

“Even before COVID, this is a government that presided over eight years of flat-lining wages and since then we’ve seen everything go up but people’s wages,” Labor education spokeswoman Tanya Plibersek said on Sunday.

The budget update last December said wages would fall in real terms this financial year because modest wage growth would be outpaced by inflation, but it also forecast wage growth above inflation in the subsequent three years.

But with some economists tipping inflation of 5 per cent, twice the rate Treasury estimated last December, the government will be under greater pressure to show how its March 29 budget can support household incomes. 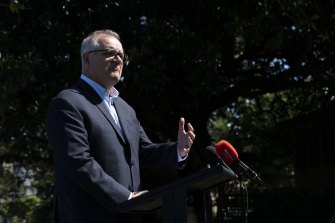 Asked about the Labor campaign against him on character and trust, and asked why voters should trust him with three years in government, Mr Morrison compared his message with a speech by Anthony Albanese last week in which the Labor leader promised to govern in the same way as former Labor prime ministers Bob Hawke and Paul Keating.

The debate in national cabinet last Friday saw Mr Perrottet raise the subject of health funding in the hope of gaining an agreement on a 50:50 spread between Canberra and the states to address deferred care such as elective surgery that had been delayed during the pandemic.

This was agreed among premiers, several sources told The Sydney Morning Herald and The Age, alongside a push to suspend the federal government’s 6.5 per cent cap in growth funding for health.

This led to an “incredibly robust exchange” when Mr Morrison declined to put the issue on the agenda. This was seen as the last chance to get a resolution at national cabinet for some time, given the forum is meeting once every month and the federal election could be called before the next meeting is due.