Mother, 30, who’s younger than her husband’s children insists their marriage is ‘all about love’ despite their 25-YEAR age gap

A couple fell in love and have been married for three years despite their 25-year age gap and the husband being five years older than his wife’s father.

They both played the same Facebook game and were members of a group for its players, where Bryan sent Amy a message six months after joining – leading to a close friendship.

They spent three years speaking online and over the phone before meeting in person when Bryan came to visit Amy in Canada for the weekend, where he proposed and asked her to move to the US to live with him.

Bryan’s children, who are older than Amy, have not been accepting of the relationship, but her family have welcomed him with open arms, and he’s even become close friend with her father. 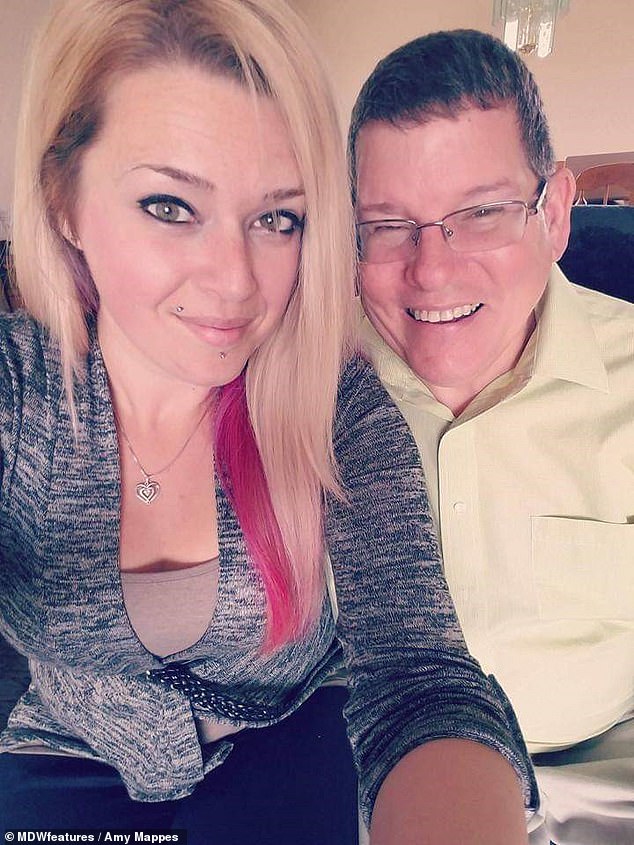 Amy and Bryan on their wedding day in April 2016. They met through Facebook two years earlier and decided to meet up when Bryan divorced. He went north to meet Amy in Canada

Amy had recently come out of a bad relationship and was focusing on raising her three children, Terry, 12, Rebeccah, 10, and Savannah, nine when Bryan came into her life.

Bryan was in an unhappy marriage and the pair soon bonded over their similar circumstances.

They began to talk ‘all day every day’ and were even video calling regularly. Within three months they had fallen in love, even though Amy was living in Canada and Bryan was in the US. 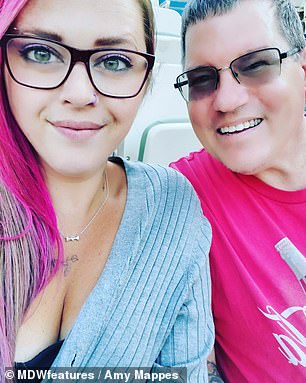 Amy, 30, and 55-year-old Bryan have been happily married for three years and the mother-of-three insists their relationship is ‘just like any other’ despite the huge age gap

Amy said she was overwhelmed by Bryan’s kind and caring nature. She said: ‘What first attracted me to him is just how overly caring he was for someone who was so far away from me.

‘Always asking how my day was, always worried about what was going on in my everyday life. Also how easy it was to talk to him, he is a very good listener. I never worried about anything I told him, I trusted him right from the start.’

After Bryan divorced in 2014, he made the trip up to Canada to meet Amy in person for the first time in September that year. Amy credits him with getting her through ‘one of the worst periods of my life’.

Before their first meeting, Amy was worried that Bryan wouldn’t be able to see past their age gap, but he proposed to her and asked her to move to America to live with him.

She said: ‘The first day we met in person in 2014, I was a nervous wreck all day although I knew him so well and we had basically talked and cammed every day for three years, it was still nerve racking.

‘Meeting him for the first time, I was almost sick to my stomach but very excited at the same time.

‘What was going through my head was that I was worried he would spend a day with me, realize the age was too much, and leave and never speak to me again. But he came to Canada and stayed the weekend. He then asked me to marry him and move to the US.’

They started the two-year process for her visa which included an immigration interview in Vancouver.

Since moving to America in April 2016 and getting married, Amy’s children now call Bryan ‘dad’, and her family are ‘surprisingly’ accepting of her relationship. 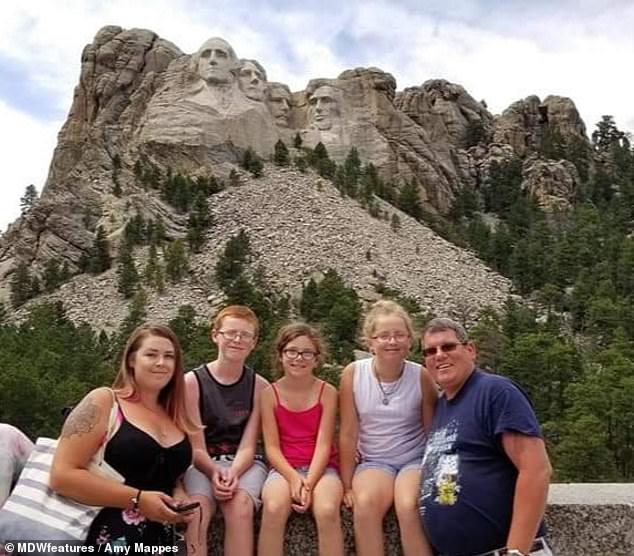 Amy, Terry, Savannah and Rebeccah and Bryan together at Mount Rushmore. Amy said that her three children, from a previous relationship, have taken well to Bryan and even call him ‘Dad’

She said: ‘My family was surprisingly accepting. I was most surprised by my dad, who is five years younger than my husband. He never questioned me, never had anything bad to say. He never even asked me why, he was just happy for me from the start and they actually became pretty good friends.

‘My mother on the other hand was a little more skeptical at first, wondering why a man that age would want anything to do with someone so young. But she eventually came around after meeting him a few times, most of my friend were also very accepting.’

Amy said that some people have accused her of only being with Bryan for his money but she insists that they are ‘soulmates’.

Despite this, Bryan’s children – who are three years older than Amy – from his previous marriage were not very accepting of his relationship.

Amy gave Bryan the option to leave her, but he said that as they are all adults, they are open to make their own decisions. 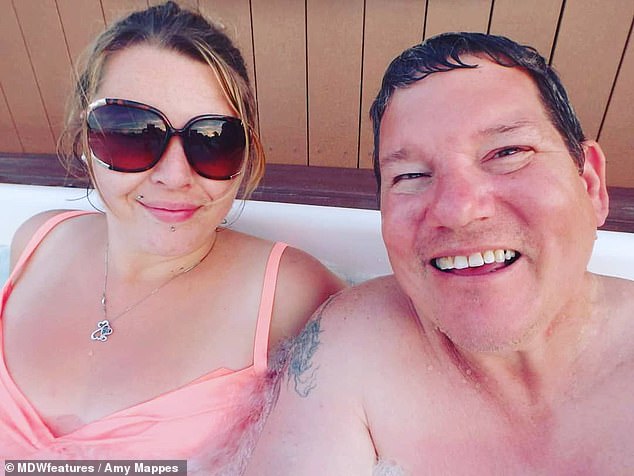 Amy’s family were ‘surprisingly accepting’ of her relationship with the weapons safety manager, but his three children – all of whom are older than Amy – weren’t so open to it

She said that their relationship is better than any relationship she has had with anyone her own age and that her children see Bryan as a father figure.

‘We have a 25-year age gap, it’s basically the same as any other relationship or marriage. If anything it’s better than when I was with someone my own age,’ she said.

She added that the pair only have issues when Bryan ‘thinks he is right’ because of his age and that other than ‘being more tired at the end of the day’ than her, there are no major obstacles in their relationship.

She added: ‘The only one big issue we had with our marriage was the fact his children weren’t really accepting. They are three years older than me. I gave him the option of leaving me so he wouldn’t lose his children but he said, “not a chance, they’re adults and they can choose how they want to act about me”. We overcame that pretty easily.’

Amy explained that the Visa being granted was the ‘best day’ of her life because Bryan lived a 12-hour drive away before they got it. 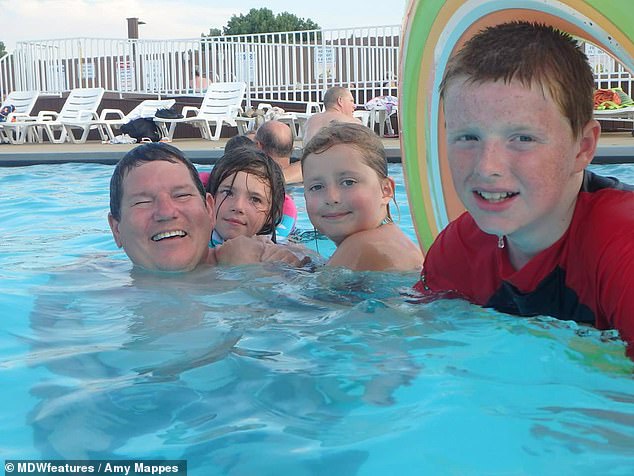 Amy said that Bryan is a wonderful father to her three children, pictured together on a trip

‘We were both very happy when we got approved because then we knew we could finally have a life together. If we couldn’t have got approved, I’m not sure what would have happened.’

Amy explained that sometimes people don’t understand her relationship but it is the same as any other.

She said: ‘My marriage and what we have together is all about love. It is the exact same as any other relationship out there.

‘We have a lot in common even for having 25 years between us. It’s never easy for me to explain why I love Bryan because there is no one reason why I do. It’s a hundred little reasons, I just happened to meet my soul mate and he was older.’